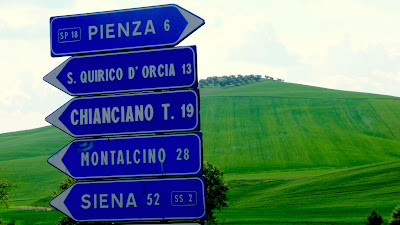 This story is from David Conwell who is a lead bicycle tour guide for DuVine Adventures (http://www.duvine.com/); DuVine Adventures is rated by National Geographic ADVENTURE as one of the Best Outfitters for 2009.

David and his wife have lived in Italy for the past ten years, first in Assisi in Umbria, then in the Monferrato region of Piedmont, and most recently in Liguria in a four hundred year old house overlooking the Mediterranean Sea. During the tour season he lives in the village of Montefollonico near the city of Montepuciano in southern Tuscany. This is his story:

“Davide, a little Prosecco? Come, sit with me,” says Umberto, the owner of La Chiusa, a world renowned restaurant and boutique hotel in the village of Montfollonico. How can I refuse, as it’s a daily ritual between us, under a pergola of Sangiovese vines that provide shade from the Tuscan summer sun. My favorite ride in Italy begins here, in Montefollonico, overlooking a stunning panorama of the mythical Renaissance towns of Montepulciano, Pienza, and Montalcino, among some of the world’s most revered grapes. OK, perhaps not the most rigorous of beginnings for a ride, but, hey, I work for a company whose motto is “Bike, Eat, Drink, Sleep.”

One of my favorite rides in Italy is a 35 KM loop that begins in the little village of Montefollonico, outside of Montepulciano in the southern part of Tuscany, and loops through Pienza, then around to Petroio before continuing through forests, olive groves and sheep pasturelands back to Montefollonico.

Sometimes I feel like Bill Murray’s character in Groudhog Day--The place remains the same, but each day, through the seasons, the landscape morphs from green waves of wheat interspersed with poppies (considered weeds by the local farmers) to amber wheels of grain once harvested, and in between crazy fields of sunflowers that make my heart sing. I begin my ride, twelve kilometers to the Temple of San Biaggio below the town of Montepulciano, of Vino Nobile fame.

San Biaggio is considered a triumph of high renaissance architecture, crafted of warm Travertine stone and displaying a virtual catalogue of classical Greek architectural elements. The fresco fragment of the Madonna and child with Saint Francis came from an earlier church on the same site, and is considered to be miraculous.

From San Biaggio the ride continues 13 KM among vineyards and pastures of sheep which produce the famous pecorino cheese from the village of Pienza, the first planned city in the western world, on the whim of a pope who was born there.

In Pienza I stop at the local baker’s for a slice of fesh-baked focaccia topped with olives, then head to the butcher’s for some roasted porchetta, pig roasted on a spit. I stash it in my back pocket, after stopping at the basilica to admire the achitecture of Rosselino, the pope’s architect and town planner, then continue with the ride along a packed gravel road overlooking the Orcia Valley,with the town of Montalcino in the distance, then head up past the monastery of Sant’ Anna in Camprena, now private property, most recently seen in The English Patient.

A fairly bracing climb of two kilometers up a ten percent grade past olive groves leads me to a little spot overlooking the red cotto-tiled rooftops of Montisi to savour my sandwich under the shade of olive trees. Alberto in the village there produces an extraordinary olive oil and has taught me much on how to discriminate not only the quality and characteristics of a given olive oil, but also at what stage of maturation the fruit was harvested. I produce olive oil myself, though from the taggiasca olives of Liguria, where my own little farmhouse is located.

The view down the valley below, with Sant’ Anna in Camprena standing on the brow of her hill, like a ship on the crest of a wave, brings a sense of well-being and fond memories as well. I’ve snuck into the cloisters several times to admire an evocative fresco painted 500 years ago by Il Sodoma, which is the centerpiece of the old refectory. He is one of my favorite renaissance painters, who studied under Da Vinci while he worked on the Last Supper in Milan. While more memorable works of Sodoma’s exist further up towards Siena at the abbey of Monte Oliveto Maggiore, the intimacy of the setting here is moving, made moreso by the need for stealth on my part, I suppose.

I then continue my ride, stopping for an espresso at the little bar in the Piazza San Pietro in the sleepy village of Petroio. I continue the last third of the ride and arrive back under Umberto’s pergola to hear again one of his ruminations ranging from the love life of swallows that come to visit him each year to which local farmer produces the finest hand made Vino Nobile, complete with requisite taste testing. Then, like a siren’s song, while he puffs on his Toscano cigar, a kind of cheroot that Clint Eastwood always had in his mouth in High Plains Drifter, he leans toward me and says, “Davide, a little more Prosecco?”