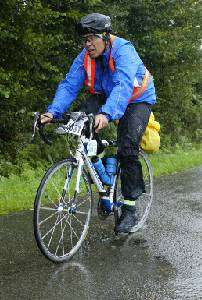 The best website for information on brevet/randonee/audax rides and related events in Italy is http://www.audaxitalia.com/ This Italian language website is the creation of Tony Lonero. I was chatting with Tony recently and I was surprised to learn his life story, and he shared a story about himself that appeared in the Pittsburgh Post-Gazette:

Penn Hills native Tony Lonero is a person with a lot to give.
That was clear last weekend when he traveled from Italy to Cumberland, Md., to complete a leg of the 350-mile Pittsburgh 250 Legacy Trail Ride, a bicycle relay between Washington, D.C., and Pittsburgh along the Great Allegheny Passage.
And it was clear Tuesday when Mr. Lonero, 49, a 1977 Penn Hills High graduate and school Hall of Fame inductee, joined fellow alumni Dan Garafalo and John Peterman to videotape a pep talk for the school's homecoming this weekend.
Mr. Lonero's speech to the students contains a message that has grown in importance for him through his years as a professional baseball player in Italy, a long-distance bicyclist, and a individual with multiple sclerosis -- that to win is less important than to keep going to the finish line.
That message -- "Ride to Finish" -- is the title of a documentary that an Italian film company, Movie Project, is making about Mr. Lonero's life.
It is a remarkable life. Mr. Lonero, son of JoAnn Bary, of Plum, and brother of Mark Lonero, of Burgettstown, distinguished himself in baseball at Penn Hills and Louisiana State University.
In 1982, he was recruited to play with the Italian Professional Baseball League. He was able to join the league because of dual citizenship that came through his paternal grandparents.
Mr. Lonero played on the team that went to the 1984 Olympics in Los Angeles and stayed on as a player and coach until the late 1990s. He also played with a team based in Nettuno, a seaport where baseball was introduced to Italians by U.S. soldiers in the 1940s.

"Americans know the importance of the soldiers landing in Anzio, but don't realize that they actually landed in Nettuno, which is the port," he explained. "Anzio is the name of the closest city."

After retiring from baseball in 1997 and starting a business in computer programming, Mr. Lonero and his Italian wife of 25 years, Mimma, settled in Anzio, about 40 miles southwest of Rome. Anzio, which has an American cemetery, "makes you proud to be an American," he said.

Mr. Lonero's life took an unexpected turn in 2001 when he began to have movement problems in his feet and right arm and was diagnosed with MS. To curb the progression of the condition, Mr. Lonero began to bicycle.
His mother, an avid bicyclist, got him started. Soon after his diagnosis, she mailed him the frame of a commemorative red Cannondale bike, a limited edition honoring the 9/11 firefighters and police officers.
"He started to ride and ride," said his mother. "His first big ride was a hundred miles. This year, he went 1,000 miles through the mountains in northern Italy."
Although Ms. Bary has often bicycled with her son, she said it was especially sweet to ride with him in the 24-hour relay, in which riders transported a metal tube holding a proclamation from Congress acknowledging Pittsburgh's 250th anniversary.
Not that the ride was easy. The 15-mile span between Cumberland and Frostburg, Md. -- the 11th leg of the relay -- took them straight up Big Savage Mountain. Not only was it the most difficult leg of the event, she said, but perhaps the darkest. They began their 1.5-hour uphill trek through the forest at 2:30 a.m.
Like his mother, Mr. Lonero has a passion for bicycling. Twice -- in 2003 and 2007 -- he has finished the 1,200-kilometer Paris-Brest-Paris ride, considered one of the most difficult events in the world.
"What is my medicine? My Cannondale!" Mr. Lonero exclaims in a Web posting that shows him in training.
In addition to physical activity, Mr. Lonero addresses his MS with conscientious nutrition and vitamin supplements. Although his symptoms come and go, he has managed to slow the progression of the illness and manage its symptoms.
"The MS is there, but I'm still going" he said. "When you have MS, you can't go back to what you did before, but you can keep going. The object now is just to finish what I set out to do.
"It may sound strange, but I thank God that I have MS. It opened up another part of me. I have met people that I would never have met if it weren't for MS."
The documentary about Mr. Lonero, "Ride to Finish," will be released in Italian theaters early next year (ed. note: now late September, 2009). An English version will be available for distribution in the United States.
Stories, including cycling trip stories, for the Italian Cycling Journal welcome; contact veronaman@gmail.com
Posted by Angelo senza la o at 6:02 AM

Email ThisBlogThis!Share to TwitterShare to FacebookShare to Pinterest
Labels: Audaxitalia