Luisa Sullivan, owner of Davanti Cycling (http://www.davanticycling.com/), sends us her second story. Luisa is an exercise physiologist and certified USA cycling coach who provides coaching services and organizes immersion cycling tours to Italy, and training camps in Colorado.
Luisa was in Italy for the 2009 Giro d'Italia and writes about her favorite 2009 Giro stage to ride and watch.
My favorite stage to ride and watch from the 2009 Giro
It's Sunday May 24, stage 15 and we are in the region of Emiglia Romagna. The stage starts in Forli' and ends in Faenza: 161 km over a total of 6 climbs or "colli."
I rode the last 71 km of today’s stage and 120 km total. I climbed the last 4 "colli" of today’s stage: Colle Albano, Valico la Valletta, Colle Casale and Colle Trebbio. 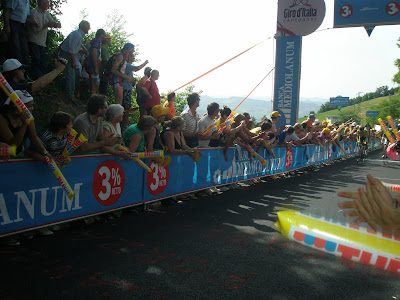 We decided to watch the race at the top of Colle Trebbio, the steepest climb. We figured that whoever is leading at the top of that mountain would win the stage, since it is almost all downhill from the top of Colle Trebbio to Faenza, the finish of the stage. We were close in our prediction.
This was one of those super hot days and these steep low elevation climbs would be killers for the poor racers. Temperatures would reach 35 degrees C, or more than 100 degrees F with high humidity.
At 6:30 a.m., hundreds of cyclists are already on the road hurrying to get to the best place to watch the racers flash by and beat the heat with an early start. 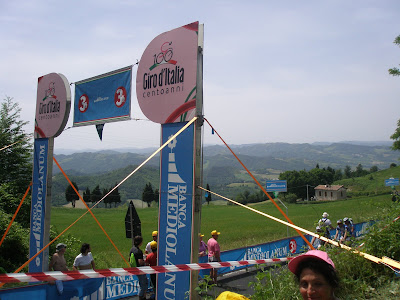 We leave from Riolo Terme, 20 to 25 km from Casola, where the section of the Giro route we plan to ride begins. At Casola we turn left for Zattaglia. The first climb to Zattaglia is 6 km with a grade between 4 and 6%. We climb at a steady rate since we know we have many km to go. It's still not too hot, so the climb is pleasant and we talk and laugh while we ride. The small road opens to beautiful views of the rolling countryside of Emiglia Romagna. We descend to the small village of Zattaglia. Soon we turn right toward Brisighella where the second climb Valico Valletta begins. Wow, this narrow road starts to go up steeply right away, with its grade above 10%, completely exposed to the sun. We stop talking, breathe regularly and remember to keep drinking. These are three killer, steep and hot kilometers. The descent is crazy steep, 18% in some sections with a lot of curves. The panorama views to the open valley are spectacular. We don’t see many cyclists on this part of the route yet. At the bottom of the descent we turn left (just follow the Giro signs.... it's easy…) and after 2 km of flat road we reach Brisighella, an adorable small medieval town at the top of a hill. We need to stop at John Paul's (JP for us) favorite gelato bar, Carletto. I only get an espresso, we fill our water bottles and restart. Now it's really hot and it's only 11:00 a.m. 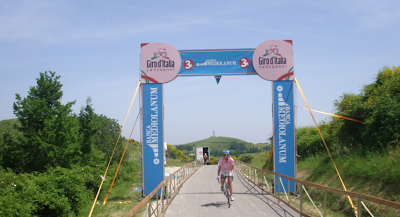 The 3rd climb: Colle Casale is 8 km long with a 6% grade average. The first 2 to 3 km are the steepest, then it levels off. This road is just like the last one: narrow and completely exposed to the sun with absolutely no shade. Near the top, we find some cyclists, a group of Americans who are pushing their tandem trying the take advantage of a small area of shade on the left side of the road. When we get at the top there is no way to recover: no place in the shade to rest, no cafe for more water. The Giro staff are still mounting the barriers for the race. Just a quick stop for a picture and we zip down the descent hoping for more cooler air. At the bottom we reach the cute town of Modigliana. It's only 12:30 p.m. and we have only one more climb to go, so this town is the right place to stop for lunch. We spot a nice cafe with outdoor seating in the shade, already occupied by lots of cyclists. After heating a “grilled panino with fresh mozzarella and unbelievable tasting tomato) I don't want to cool down too much but I realize that we’ll be waiting a LONG time on top of the Colle Trebbio, since the racers are not expected to be there before 4:30 p.m.

Around 1:20 p.m. I slowly start the last ascent: Colle Trebbio. It's 6.7 km long but with an average grade of 8%. Temperature is 35 degrees C. and I do not want to experience heat stroke. I start slowly and, oh my God, the first 3 km are steep, between 12 and 15% grade. I insert my 28 in the back and decide to take it easy through those steep parts. There is NOBODY riding on the road and only few fans along the sides. It's too hot and people probably decided to arrive later. After the first 3 km it levels off. Two guys from Rome (I could tell from their accents) say to me, " Oh now you can relax, just get a coffee...). I know then, that the worst is over. The 4th and 5th km are almost flat.

Now comes a real fun story. This is a typical Giro story. I am 1 km from the top. It is still early, around 2:00 p.m. since the Giro is not supposed to reach the top before 4:30 p.m., I am literally the only person riding on the climb and I am wearing my pink jersey. Well, two fans with motor scooters start escorting me hammering their horns, simulating the arrival of the "gruppo maglia rosa" as it happens at the real Giro. I cannot stop laughing. All the spectators already lined up along the last 100 meters from the top go crazy when they see me arriving between these two scooters. They all scream and cheer. It is absolutely hilarious. When I arrive at the top, the entire crowd is complimenting me and offering me food and water. I feel like a celebrity. I even got interviewed by RAI (National Public Italian TV station) but they apparently won’t broadcast the interview. I sit on the grass in the shade and relax. It's only 2:30 p.m.

Around 4:00 p.m. everybody starts getting anxious to know what's happening in the race. There is a small TV under a tent up the hill, but I do not want to lose my first row spot here. I see two guys with a radio on the other side of the barrier. I use my secret weapons (woman, foreigner and cyclist...) and here we go, they start updating me about everything they hear about the race on the radio. We know that there is a small lead group. It's around 4:15 p.m. and we hear that Basso attacked on the Colle Casale and the crowd explodes, "Basso, Basso..." We all start calculating to predict when the riders will be arriving at the top of Colle Trebbio, where we are waiting. We hear that Basso keeps gaining time on "gruppo maglia rosa" with Di Luca. We all get very excited! 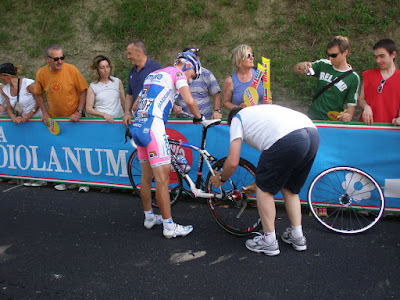 It's 4:45 p.m. and we start hearing the helicopter. Here they come! They are CLOSE! All the police motorcycles arrive and we know the lead group is here. They cross the top exhausted; their faces say everything about the heat and the fatigue of two weeks of racing. A Lampre racer in the lead group has a flat, just in front of us. Just at the top, what a bad luck... and his mechanic takes forever to replace his rear wheel. We scream and boo the mechanic, the crowd screams "fire him"!

I have no water and I have 25 km to go. At the bottom of the descent I catch the wheel of three big guys. I use another secret weapon. With a sweet voice I let them know I am on their wheel asking for directions, and they all proudly say, "No problem, we will show you the road, come with us." I knew then I could get back to the hotel in Riolo safe and in no time!
What a great and memorable day!

Luisa's first story was about her favorite ride in Italy which is a loop ride beginning in Cortina d'Ampezzo:
http://italiancyclingjournal.blogspot.com/2009/04/luisas-favorite-ride-cortina-dampezzo.html