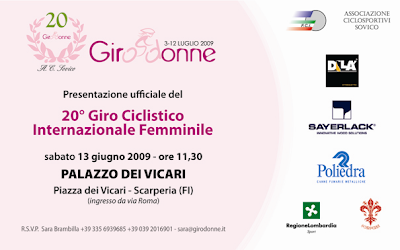 GiroDonne, or more formally Giro d'Italia Internazionale Femminile, will start July 3 in Tuscany. Teams will be competing in the 10 stage race that will pass through the regions of Tuscany, Marche, Abruzzo, Molise, Puglia and Campania. Organizer Giuseppe Rivolta has prepared an exciting course for what will be the 20th edition of the race. The race will conclude on July 12th.

Past winners Fabiana Luperini and Edita Pucinskaite are among those competing; Luperini won the race in 1995, 1996, 1997, 1998 and 2008. "This year will be very difficult," said Luperini. "I think the competition will be tough. Last year, I had great form, and not all years are equal. The race will be longer and the outcome more open."

Pucinskaite recalled her own experiences which include two overall wins. "To get the pink jersey: this was my goal which I pursued for many years. It was an obsession, a goal fixed in my mind. After an unexpected yellow jersey in the Tour de France and a rainbow jersey after that, all the rest of my career ambitions were colored pink! But after difficult times and years, probably to make me appreciate it that much more, I got the best gift in 2006. It was a sea of emotions, ranging from disbelief to joy, indescribable joy and relief, too. I won in 2007, too. The Giro leaves a person with the feeling of having done something unforgettable."

Email ThisBlogThis!Share to TwitterShare to FacebookShare to Pinterest
Labels: GiroDonne