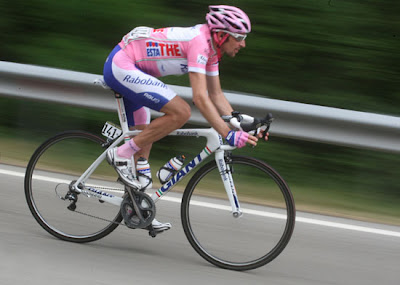 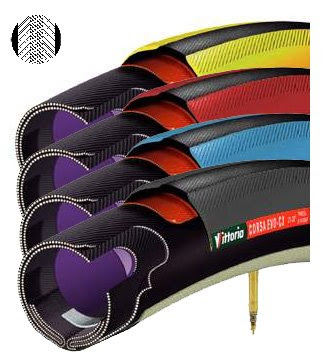 Vittoria reminded me that they had a great Giro d'Italia:
"Vittoria completely swept the board at Centenary Giro winning the Pink Jersey, the Green Jersey, and getting second place with Danilo Di Luca who is also the Mauve Jersey, Points Classification winner (maglia ciclamino); this is quite an impressive result. Vittoria’s Centenary Giro has been an outstanding success: winner, second and fourth place finisher (Carlos Sastre from Cervelo Test Team) were all endorsing Vittoria tubulars for the 3456 grueling kilometres that drove the racers form Venice to Rome over 21 stages.

The race between Di Luca and Menchov was fierce and the two athletes held lots of respect one to the other. 2007 Giro winner Di Luca clearly showed conflicting emotions mere seconds after Menchov’s crash during the last leg of the final time trial in Rome; his expression looked so tense since victory must have been looking possible, even for very few seconds. After three weeks of grueling racing this would not have been a “fair” way to win the Giro. Stefano Garzelli is the Giro’s Green Jersey winner and he pretty much deserves it for the constant commitment and hard work he put into this race.

It's another great result for Vittoria. The outstanding success of Team Rabobank Denis Menchov and LPR Brakes Danilo Di Luca at Italy’s most prestigious race builds on early-season successes worldwide in the the most extreme conditions imaginable. Vittoria Corsa Evo CX tubulars mark a long history of racing success, down the years, many great champions used the CX to win the most important races. We wish to thank all our athletes that got stage wins, a total of 10 “vittorie”. We thank Denis, Danilo, Stefano, Carlos, Simon, Alessandro, Ignatas for the incredible show they put on and for all the wins they were able to get thanks to our CX tubulars."

Email ThisBlogThis!Share to TwitterShare to FacebookShare to Pinterest
Labels: Vittoria