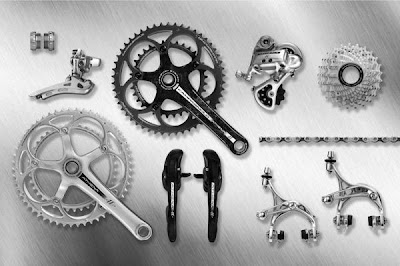 The following review was published by www.cyclingnews.com:


Base model 11-speed group exudes grace, style and value
If SRAM is the performance-value leader and Shimano is what others are measured against, Campagnolo can always be depended on to be the most classy component group on road, no matter the category. It’s newest Athena group, which serves as the entry point to 11-speed, is no exception.

Any Campag-phile will be absolutely tickled with the performance and aesthetic of the new Athena. Whether it’s an update to a vintage bike, picked by the connoisseur on a budget, or for a winter bike as supplement to the new Super Record race package, the rider preferring Campagnolo will not be disappointed. Athena’s performance in the latter case for someone with two bikes and a higher-level 11-speed group is possibly its most impressive feat, as it generally performs as well as any of Campy’s other 11-speed groups.

Campagnolo 11-speed, generally speaking
The following performance statements can blanket all of Campagnolo 11-speed groups and hold true for Athena. The ErgoPower lever shape paired with Campy’s dual compound hood is the most comfortable lever on the market, though some may not prefer the thumb operated cable release lever. Small hands seem to have a particular problem reaching the lever. Campy accomidates extra-large hands through the use of a body shim that increases lever reach by 8-degrees.

While Campy’s brakeset, equipped with a single-pivot rear design, previously came in a clear third behind SRAM and Shimano with regards to power, 2011 brings the option of a dual-pivot rear brake for all of its groups from Super Record to Veloce, which should significantly close the gap.

What the Campy single-pivot rear brakeset lacks in power, however, it makes up with some of the best modulation on the market. Newer riders will particularly benefit from the single-pivot rear brake’s aversion to locking even under panic stopping. The attributes will definitely also benefit those up through the professional ranks in wet conditions, especially. It should be noted that the latest Ergopower lever design does offer more power to the dual pivot front and single pivot rear calipers, should you be upgrading from the older style lever. Ultimately with a choice of a single- or dual-pivot brake in 2011, riders will have to decide which suits their riding style and conditions best. As an example, we expect the new dual-pivot brakes to be used in the mountainous grand tours, while the single-pivot brakes surely make sense for the slippery cobbled classics.

There’s no getting around the fact that 11-speed is more finicky to precise adjustment than Campy’s previous 10-speed groups and much more testy than Shimano or SRAM’s offerings, with the latter seeming the most robust in our experience. After our experiences on the road — the group requires weekly fine-tuning and attention to stay in top working condition — we cannot recommend 11-speed for cyclo-cross. This is despite the benefits the lever’s shape and function would have off-road. Campy makes the Centaur and Veloce groups with the same lever shape in 10-speed, thus making them prime options for off-road use in the autumn.

Athena; goddess of grace
The performances of Campy groups are best described as graceful, and this holds true for Athena. The lever action is light and the rubberised rear derailleur pulleys and rub guards within the front derailleur cage keep things very quiet. A key attribute is that Campy doesn’t slam into gear like SRAM, which depending on your purpose can be a good or bad thing.

Ultimately, riding Athena offers the same riding experience as any of Campy’s 11-speed groups. In fact, you’d be hard pressed to differentiate between Athena and Record, performance wise, without looking down at the components while riding or a scale. Campagnolo absolutely rivals SRAM in terms of the consistency of performance throughout the range of their groups.

Timeless looks
While Campy’s carbon-infused Super Record, Record and Chorus groups are super sexy, there’s still something to be said for the way Athena’s high-gloss polished aluminium parts pop off a bike - especially an elegant steel or titanium model.

The finish seems to be as cared after at that found on Campy’s higher-level groups, and held up admirably over the course of our six-month test.

The greatest benefits
We’ve already mentioned the superb ergonomics of Campagnolo’s ErgoPower levers, and the excellent modulation offered by the brakes. The final - big deal - performance attribute worth calling attention to that’s found in the Athena group is Campy’s Ultra-Torque semi-axle crank and bottom bracket design. While the forged aluminium Athena crankarms are noticeably more flexible than most of the carbon, and just about all of the hollow aluminium options on the market, they’re also some of the narrowest - with external BB cups - on the market, as the Q-Factor measures just 145.5mm.

Our test rider weighs 150lbs and can be classified as an all-round rider — neither a wispy climber, nor a ring-bending sprinter — and while the crankarms comparative lack of stiffness was noticeable, it wasn’t a huge negative blemish on the group. Given the option between maximal stiffness and a narrow Q (with adequate stiffness) we’d pick the latter and that seems to be right where Athena falls. The crank’s shifting performance and overall stiffness is aided by the high-quality 3.5mm-thick machined chainrings, though nothing currently on the market can compare to the stiffness of Shimano’s two-piece Dura-Ace and Ultegra large chainrings.

Finally, it’s worth noting that the Athena rear derailleur will accept up to a 12-29-tooth 11-speed cassette, which can be paired with a compact version (CT) of the crank for those needing mountain goat-like gearing without the stigma or lesser aesthetic of a triple.

Testing, 1,2
Our Athena group test spanned three seasons: winter, spring and summer. We rode our test group in the mountains and on the flats and through rain, snow and sun.

We tested Athena with its optional carbon wrapped levers, which adds around £25 to the all-alloy group price, but without the carbon crank, which saves £150. A full 8-piece alloy group costs in the region of £800 and the carbon group (with carbon wrapped levers and carbon crankset costs £975: both group prices can vary by £50 due to front derailleur, dual- or single-pivot rear brake, bottom bracket size and cassette options.

While over the course of our test the group needed considerable tuning attention, it did not suffer any major failures; the chain shows some wear, though falls within reasonable stretch parameters, and the brake pads have held up very well.

One of the biggest issues we had with the group was upon installation. We did not have a Campagnolo 11-speed chain tool, which is required to properly install the chain. In the end we went to a local shop to borrow a tool. Campagnolo’s own chain tool costs upwards of £130 and adds considerable expense to the group, should you enjoy working on your own bike as we do.

In the end, despite any of the issues we’ve addressed here, we must say bravo to Campagnolo for their work on Athena. If you like Campagnolo’s style of performance, this reasonably priced group will not let you down.


Stories for the Italian Cycling Journal about rides, granfondos, having a good time cycling in Italy, Italian cycling history, etc. are very welcome. Contact me at veronaman@gmail.com. There are more than 1,500 stories in this blog. The search feature to the right works best for finding subjects in the blog and there is also a translate button at the bottom so you can translate each page.
Posted by Angelo senza la o at 6:28 AM