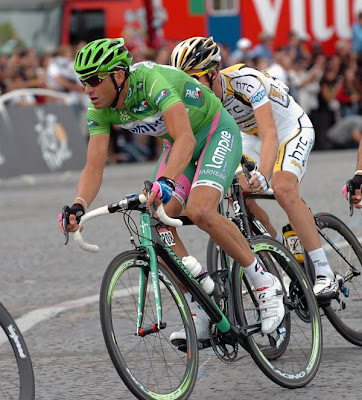 A week ago it was announced that ISD would become a partner of Lampre and the team would be named Lampre-ISD beginning next season. Lampre has now announced that they have renewed their contract with Wilier for another three years. The Lampre - Wilier relationship began in 2003.

Under the agreement Wilier will supply Lampre-ISD with a yearly supply of 150 bikes and of "all the necessary technical material".

In 2011 Team Lampre-ISD will use the Cento1 SL (of which Petacchi rides a specially modified one).

Mario Cipollini will become one of the primary sponsors of what was the ISD team under the name "MCipollini". The team is searching for another major sponsor at which time it will be decided if "MCipollini" will be the primary or secondary sponsor. 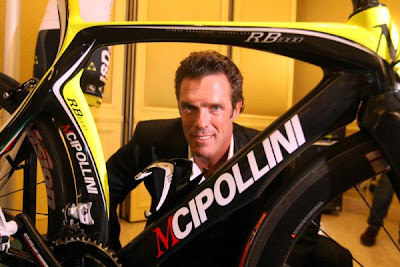 Photos: Petacchi won the green jersey at the 2009 Tour de France on a Wilier Cento 1 SL; Cipollini photo by Bettini

Who knows what "Wilier" stands for?

Stories for the Italian Cycling Journal about rides, granfondos, having a good time cycling in Italy, Italian cycling history, etc. are very welcome. Contact me at veronaman@gmail.com. There are more than 1,500 stories in this blog. The search feature to the right works best for finding subjects in the blog and there is also a translate button at the bottom so you can translate each page.
Posted by Angelo senza la o at 6:02 PM