Who Wins the Polka Dot Jersey?

Kimberly B. returns with another story for ICJ. In her first she wrote about meeting Giovanni Pinarello in Treviso, Italy, during her cycling trip with Eros Poli. That trip began in France where she rode some stages of the Tour de France with Eros. To Kimberly's story:

Who Wins the Polka Dot Jersey?

The Polka Dot Jersey and the King of the Mountain title is one of the highlights of the Tour de France. Below, I reflect on those that win this cheery jersey, how I scored one myself and who else deserves one too!

While riding the Tour de France routes with Eros Poli (we finished our trip in Italy with the Granfondo Pinarello) we rode our bikes to the elegant town of Morzine and later were able to see the finish in the mountain town of Avoriaz. All day long I had been admiring my favorite jersey – the stunning Polka Dot Jersey. I love the jersey for several reasons: 1. I love wearing polka dots and I use them often in my work as an artist, 2. I love climbing mountains on bike and foot. 3. I am in awe of the riders who have the strength, the concentration, the grace of a dancer, and the determination to win the epic climbs of the Tour de France. 4. The King of the Mountain title is an inspiring metaphor reminding me of the daily heroes of my life – those people who help us to dream bigger, try harder, and know that we can make a difference in the world.

Throughout the day, I scanned the kiosks to find the sacred polka dot jersey for a reasonable price. The price was usually 65 Euros, way too pricey for my budget. So, I assumed I would have to wait and be content with photos of the jersey.

At the end of the race, the ever well connected Eros scored a ride down the mountain back to Morzine in a Carrefour team car, driven by the Marketing Director of Carrefour. I was amazed – here we were in the car of the SPONSOR of the Polka Dot Jersey. We asked lots of questions about the sponsors, how it works and about the Polka Dot Jersey too.

Then, as if God himself had heard my prayers and secret yearnings, our driver said, “Oh! I forgot – I have presents for the four of you!” He reached into his bag and pulled out 4 (yes 4!) Polka Dot Jerseys and handed them to us. We were in awe, we looked at each other and thanked him profusely – feeling that there weren’t enough "thank you’s" that could be said in return for the stunning gift! Then he added, “Oh yeah, they were signed by the King of the Mountain winner, Jerome Pineau.” 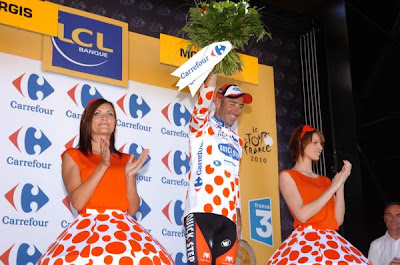 Our mouths dropped open, again, we were so grateful and amazed. It was another miracle on Eros Poli’s tour! We, the lucky ones, also had the chance to win the Polka Dot Jersey. 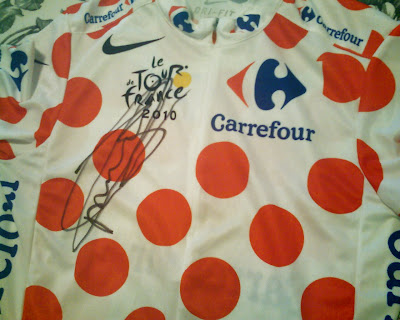 I came closer to the Polka Dot Jersey than I ever thought possible. I had the chance to see Jerome Pineau, receive a Polka Dot Jersey from Carrefour, and bring home one that was signed! I started thinking about the inspiring title and who in my life should be awarded the King of the Mountain title and the gorgeous jersey.

In my life, I would love to give the Polka Dot jersey to my amazing grandparents whose strength and ability to dream big and dance with life always inspires me. My family, whose support and encouragement (and sometimes honest and direct observations) deserves the Polka Dot Jersey for all of the energy they offer. My students at the elementary school and high school, who achieve more than they think possible and are more resilient than they think, deserve the title and the jersey so they are affirmed in the beautiful potential of their future. My friends, loved ones, and those I’ve never met who have fought cancer, fought wars, risen above debilitating circumstances, and stood up for the sanctity of humanity, deserve the title and the powerful jersey too.

Wishing you all you need to win or to award the Polka Dot Jersey,

Kimberly B. (The Frame)

P.S. I am also reminded of the power and lasting effects of the chocolate bar too! (Couldn’t resist!) 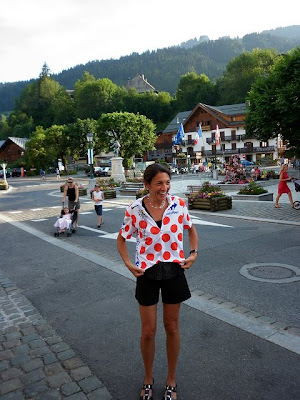 Stories for the Italian Cycling Journal about rides, granfondos, having a good time cycling in Italy, Italian cycling history, etc. are very welcome. Contact me at veronaman@gmail.com. There are more than 1,500 stories in this blog. The search feature to the right works best for finding subjects in the blog and there is also a translate button at the bottom so you can translate each page.
Posted by Angelo senza la o at 12:08 PM

Email ThisBlogThis!Share to TwitterShare to FacebookShare to Pinterest
Labels: Poli