Rise of the Mamils (Middle-Aged Men In Lycra)

The following story appeared in the BBC's News Magazine. The story begins with a photo of the author riding in an unidentified location. But, we know it's the Dolomites. 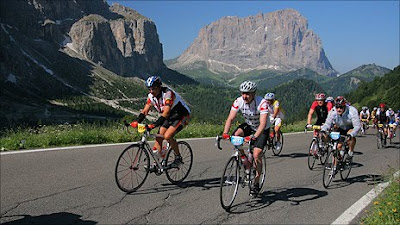 Flashy sports cars are out, now no mid-life crisis is complete without a souped-up road bike. Why?

Every weekend, across the nation's rolling countryside, watch out for the Mamils: middle-aged men in lycra.

And ladies, if you have a man at home taking an unusual interest in how you shave your legs, you may have a Mamil in the making too.

Research conducted by the retail analyst Mintel suggests there has been a surge in the number of middle-aged men choosing to get on two wheels.

Given the number of men aged 35-44 who are buying fancy-pants road racing machines, is this a 21st Century mid-life crisis? Has the silence of skinny tyres and carbon fibre framesets replaced the thunderous noise of motorbikes?

Back in the day, when some men with a bit of disposable income reached a certain age, they did some strange things. The grind of the office and home life convinced some that the answer to an expanding midriff lay in a pair of designer jeans and a flashy but cheap Japanese sports car. Teenage daughters ran away screaming. Sons were deprived of the role models seen in adverts for shaving products.

Gents, our womenfolk were right all along. It wasn't a good look. And did it do anything for the beer belly?

But then came a confluence of coincidences that gave a man an option other than looking like a gigolo cruising Italy's glitzy Lake Como.

The past three years have seen the rise of the uber-techno, super-flashy, full-carbon fibre, bobby-dazzler road bike. The market for these bikes has expanded faster than a 45-year-old's waistline, partly thanks to the success of the British cycling stars at the Beijing Olympics. Marketing departments have produced smart advertising messages that encourage a bit of freedom, elite performance and memories of teenage derring-do.

And the result can be seen on Saturday and Sunday mornings as middle-aged blokes polish the rear derailleur, lower the mirrored shades and pedal into the hills. Every couple of weeks, you'll see a girth of Mamils gathering to race a "Sportive", a form of amateur competing that has taken the British cycling world by storm.

While the serious, younger riders are busy getting into the zone of elite competition, we're comparing the latest GPS route-finding cycle computer and pretending that we know how to stretch.

We hit the first hill and suddenly we're a puffing, panting, heaving mass of sweaty humanity that is well past its sell-by-date. Sounds humiliating? I've never had so much fun in my life - and there are also some unintended benefits of being the older rider.

First, there's the no-questions-asked fan club. My kids, on the promise of an ice cream, will cheer me over the top of any climb. They're still young enough to think I'm Superman - and you don't get that kind of pick-me-up on the golf course.

Even better is the Mamil's solution to saddle sores. A teenage shop assistant in a too-posh-to-pedal London shop tried to sell me some balm for £30. What's the point of that, I asked. I've got loads of unused nappy rash cream at home. He thought I was terminally uncool. I know better son, learn from your elders.

But no Mamil's life is complete without the spiritual journey to the mountains.

Robbie McIntosh is 45 and has spent much of the past year clad in lycra after being talked into cycling from Lands End to John O'Groats with a group of fellow Mamils.

Ten days of pain, rain and groin strain later, he decided he was ready for Mont Ventoux. This mountain, the Giant of Provence, is one of the toughest climbs in the world - 23km straight up. British cycling legend Tom Simpson died on its slopes in 1967. Last month, with terror in his belly, Robbie began turning the wheels.

"I wanted so much to say I'd climbed the Ventoux. It's an amazing mountain and a serious challenge.

"I was surprised at my nerves but I had a sense that if I could do this on a bike I could do anything and that was a feeling I wanted so much." 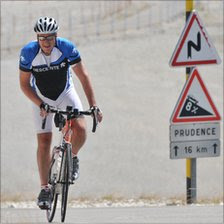 And make it he did. He wasn't as balletic as the local, young French riders - but he stood alongside them at the 1,910m summit and surveyed the world.

"Cycling has given me an opportunity to feel sporting achievement of the very highest level," says Robbie. "It doesn't matter that the pros ride up Mont Ventoux at twice the speed or more. I can scale the same sporting heights as the best cyclists on the planet. I can walk with giants." 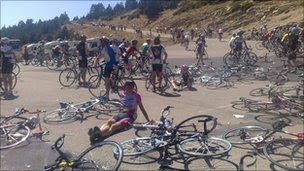 So a man becomes fitter and happier. Where's the midlife crisis in that? Ah. The costs.

Ladies, look away now. Men who seriously cycle typically spend about £3,000 to live that dream. For a time, at least. That sum will cover the set-up and the first year, then about £1,000 a year, at least, on top of that.

The must-have bike of the summer is the Pinarello Dogma, the bike used by the British Team Sky in the Tour de France. Yours for about £7,000. Grown men stop and stare at this machine, like seven-year-old lads pressed against the toy shop window.

Thankfully, most Mamils don't have that kind of money to burn. But it hasn't stopped the rapid growth of a suburban money-laundering operation. It goes something like this. Man dribbles while looking at £100 bib shorts on cycling website - they're the kind that make you look like a wrestler. Partner says no, think about the starving children. Man continues to look at bib shorts and decides they will help conceal his 36-inch waist.

He calculates that three weeks of hard pedalling will help on the belly front - which is coincidentally the same time it takes to receive a secret new credit card to pay for the shorts. Job done. Platinum status achieved with the online cycling retailer. Discounts on more kit, all of which is sent directly to the office rather than home.

When you run the slide rule over all of this, flash road bikes definitely look like a midlife crisis.

There's a look to strive for, expensive kit and excuses for weekends away.

I and my band of hill-climbing brothers disagree. It's about becoming a happier and healthier person rather than sliding towards mediocre oblivion at the bottom of a pint glass.

But I conclude with a message from my own Mrs Mamil to other cycling widows. She's discovered a precise form of retaliation. If your portly husband buys another stupid fluorescent jersey, buy yourself another pair of shoes.

That way, at least one of you can look good.

Stories for the Italian Cycling Journal about rides, granfondos, having a good time cycling in Italy, Italian cycling history, etc. are very welcome. Contact me at veronaman@gmail.com. There are more than 1,500 stories in this blog. The search feature to the right works best for finding subjects in the blog and there is also a translate button at the bottom so you can translate each page.
Posted by Angelo senza la o at 5:38 PM

Email ThisBlogThis!Share to TwitterShare to FacebookShare to Pinterest
Labels: Mamil