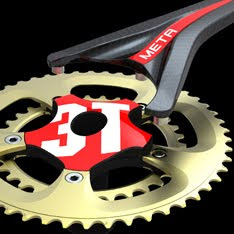 The Eurobike show begins on September 1st in Friedrichshafen, Germany, on the northern part of Lake Constance. One of the first new product announcements comes from 3T, the Italian component maker:

At this year’s Eurobike 3T is celebrating its 50th year in the bike business and does that with style. The company is launching here its pinnacle in carbon components; the new crankset, dubbed META which, according to 3T, "is a radical re-think of this most fundamental component."

The new META crankset, "Overturns conventional engineering concepts, is benchmarked against the best, and offers significant build advantages for amateurs and original equipment manufacturers." Whether 3T’s new carbon crankset can do all that remains of course to be seen. However, striking is the fact that META even offers an axle made out of carbon fiber.

Commenting on the design of META, 3T technical director Richard McAinsh states: “We targeted the best-in-class products and believe that our new design achieves its goals for stiffness and light weight. An important driver in reducing weight was to eliminate the bulky ‘boss’ at the center of the crank spider. We did this by separating the crank and the axle. The axle is now a separate, full-carbon sub-assembly carrying the 5 mounting points for the crank and chainrings.”

The company also announced that it is changing its name from new3T to 3T Cycling. 3T located in Madone, near Milano, was originally known as 3TTT — Tecnologia del Tubo Torinese (Turin Tube Technology). The firm was founded by Mario Dedioniggi in Torino in 1961. Dedioniggi was skilled at manipulating and bending steel tubes to fabricate the lightweight handlebars desired by racing cyclists, and Italian professional riders were among 3T’s first customers. The company became new3T in 2007 and switched production to carbon-fiber composite materials, and in 2008 it returned to pro cycling after several years' absence. For the 2008 season it sponsored the CSC team, which won the Tour de France.

Stories for the Italian Cycling Journal about rides, granfondos, having a good time cycling in Italy, Italian cycling history, etc. are very welcome. Contact me at veronaman@gmail.com. There are more than 1,500 stories in this blog. The search feature to the right works best for finding subjects in the blog and there is also a translate button at the bottom so you can translate each page.
Posted by Angelo senza la o at 5:53 AM