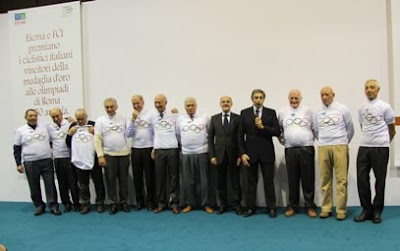 The EICMA brought together nine Olympic gold medal winners at the public opening of the Milan bicycle fair yesterday. It was a remembrance of the 1960 Olympic Games held in Rome where the Italian national cycling squad took six gold medals.

Present were gold medalists from the Italian time-trial team of Tony Bailetti, Giacomo Fornoni and Livio Trapè (Ottavio Cogliati has passed away); Sante Gaiardoni, who took the victory in both the 1km time-trial and sprint races; Sergio Bianchetto and Giuseppe Beghetto the winning pair on the tandem track sprint; and team-pursuit champions Marino Vigna, Luigi Arienti and Franco Testa (Mario Vallotto has passed away). The riders are wearing Olympic shirts in the photo above.

The gold-medal-winning, Cinelli-riding, Franco Testa, Mario Vallotto, Luigi Arienti and Mario Vigna in Rome on August 28, 1960. They set an Olympic record of 4:28:88 in the semifinals. 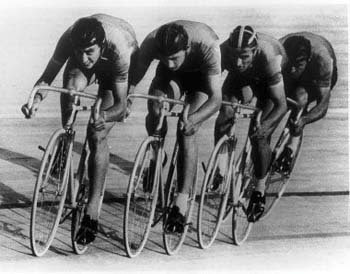 Also attending were Paolo Bettini, the latest Italian Olympic champion and current Italian Cycling Technical Director, and former champions Felice Gimondi and Vittorio Adorni. Adorni also stepped on the stage together with the nine main protagonists of the event, for a group shot wearing the 5-circled Olympic champion white jersey, worn with pride and emotion by everyone. Gimondi and Adorni at the celebration:

A very emotional moment occurred when Fiorenzo Magni - former cycling champion, currently a successful businessman - who will be 90 years old in a few days, took the floor: “I am turning 90, but not feeling like it. I would like to cross the 100 hundred line and keep working like I do.” Journalist Marino Bartoletti, Paolo Bettini, and Vittorio Adorni with Fiorenzo Magni: 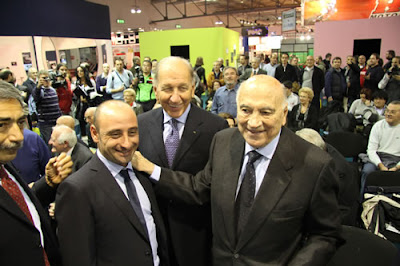 Stories for the Italian Cycling Journal about rides, granfondos, having a good time cycling in Italy, Italian cycling history, etc. are very welcome. Contact me at veronaman@gmail.com. There are more than 1,600 stories in this blog. The search feature to the right works best for finding subjects in the blog. There is also an Italian weather widget along the right side and a translate button at the bottom so you can translate each page. What I'm riding.
Posted by Angelo senza la o at 6:00 AM

Email ThisBlogThis!Share to TwitterShare to FacebookShare to Pinterest
Labels: 1960 Olympics