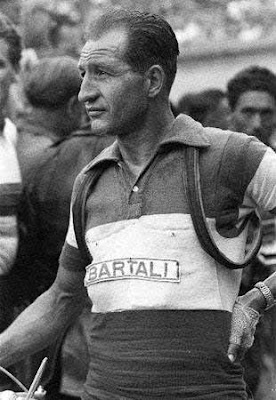 Gino Bartali will receive the title "Righteous Among the Nations". The story from the Museum of History of Polish Jews (dated November 5, 2010):

"Gino Bartali, two-time winner of Tour de France and triple winner of Giro d’Italia will be the first world-class sportsman posthumously honored by Yad Vashem with the title “Righteous Among the Nations” for saving Jews during the Second World War.

Gino Bartali will receive his tree in the Garden of the Righteous in Jerusalem – this gesture is a way of honoring the fact that between 1943 and 1944 he saved from deportation hundreds of Jews from Umbria and his home Tuscany.

The famous cyclist, deceased in 2000, will be the 485th Italian honored with the title “Righteous Among the Nations”.

Apart from help provided to Jews, Bartali transported false documents that saved lives of Catholics and dissidents. He used his position to bring information and documents to the Italian resistance movement.

The cyclist also cooperated with the Italian organization Delasem (Delegazione per l’Assistenza degli Emigranti Ebrei), supporting the persecuted Italian Jews. Its activity was uncovered in autumn 1943 and all its members apart from Giorgio Nissim were deported to concentration camps.

However, with the help of the Pope Pius XII, the archbishop of Genova and the Franciscans, Nissim managed to rebuild the organization and resume its activity.

After Nissim’s death in 2000, his sons found out from his diaries that Bartali helped him organize false documents for Jews.

The cyclist used to set off from Florence in the morning, pretending that he was training – and then he went to a monastery in Lucca, where Jews were hiding. He collected their photos and handed them over to Nissim.

The famous cyclist also used his position to learn in advance about the raids planned on Jewish hiding places.

In 1943 Gino Bartali led Jewish refugees towards the Swiss Alps. He cycled pulling a wagon with people hidden in a secret compartment. He explained to the patrols that it was just part of his training.

Bartali was born in 1914 near Florence. He was a professional cyclist from 1935 to 1953. He won numerous awards and titles, among others he was a four-times Champion of Italy in road cycling.

A previous story that appeared in ICJ about Bartali saving Jews, and the plaque dedicated to him in Terontola, can be read here.

Stories for the Italian Cycling Journal about rides, granfondos, having a good time cycling in Italy, Italian cycling history, etc. are very welcome. Contact me at veronaman@gmail.com. There are more than 1,600 stories in this blog. The search feature to the right works best for finding subjects in the blog. There is also an Italian weather widget along the right side and a translate button at the bottom so you can translate each page. What I'm riding.
Posted by Angelo senza la o at 5:08 AM