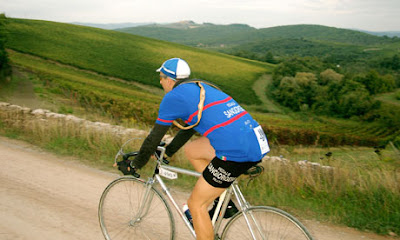 This article appeared in guardian.co.uk and was written by Matthew Sparkes

Cycling has been on the up for years now, and an increasing number of Brits are choosing to combine their hobby with a holiday. There are lots of options, of course - both L'Étape du Tour and La Marmotte allow ambitious amateurs the chance to race a small slice of the Tour de France, for example. But these are for serious roadies only – it's all Lycra, carbon and electrolyte drinks. Likewise, jumping on a touring bike with a tent and spending weeks in the wilderness is not everyone's cup of tea.

Which is why L'Eroica in Italy offers something truly unique: a race on ancient roads using obsolete bikes, surrounded by gorgeous scenery and fueled by a mouth-watering selection of food and wine.

As a period cycle race - only bikes made prior to 1987 can enter - riders also dress in appropriate costumes (Merino wool jerseys, leather shoes, small peak caps), and most of the course is made up of the bone-shaking "strada bianche", Italy's crushed gravel tracks. When it was first held in 1997, it was intended to help save these roads from being gradually replaced with asphalt.

And it worked, because the route is now marked with permanent signs and the hundreds of miles of lumpy, pot-holed lanes are still there.

L'Eroica has an entirely different ethos to modern events on the cycling calendar - for many years the event was sponsored by the classic saddle make Brooks; now it is backed by Le Coq Sportif, who once made woolen jerseys for the Tour de France. The name literally means "the heroic", and that's precisely how it feels. The rough surface breaks bikes and shreds tires, crashes are a distinct possibility and there are no support cars to help you out when any of these things happen. The food stops are lavish buffets rather than places to simply wolf down calories – cakes, stews and fruit are all laid on, and gallons of local Chianti are on tap. This is all designed to be as authentic a slice of the golden era of cycling as possible.

The race starts each October from Gaiole in Chianti, a picture postcard town that boasts a clutch of medieval pieves (churches), cobbled streets, cafes and trattorias. In 2008 Forbes magazine named it one of the "most idyllic locales in Europe to live". During the weekend of L'Eroica more than 3,000 competitors flock into town early to register for the race and peruse dozens of stalls which spring up selling vintage bikes, parts and jerseys. These traders arrive not only to make a little money, but largely to show off their own collections.

The majority of riders are Italian, but the UK is the next best represented country with 310 British cyclists making the long journey this year. John Keyes had driven from London, having taken part the previous two years. "It's the ethos behind it," he said, explaining L'Eroica's appeal. "It's about getting to the spirit of what cycling was really like in the old days of gravel roads, old bikes, woolen jerseys - that was the spirit behind those great heroes of the Tour de France we all emulate today. They were fed brandy, figs, salami, then they'd go on their merry way again. It's set up like that and it's a real treat to come and experience it."

The races are divided into distances to suit all levels of riders, from the 38km that the majority tackle to the full 205km course, which is so demanding that anyone who finishes in under 12 hours is awarded a huge hamper.

I opted for the 75km distance on the grounds that it would be long enough to cause a little heroic suffering, but short enough for me to complete in time for dinner. We set off in staggered groups a few minutes apart, cheered on by the large crowds that gathered early and lingered all day. After a few miles, the familiar paved roads rose sharply and gave way to the gravelled strada - with no cars around, it was like riding into another age, as we trundled past olive groves, vineyards and ancient farmhouses.

You have to pick your lines carefully to keep traction on the loose surface, and to stop yourself from being bucked out of your saddle. At times the surface is so poor that the stunning Chianti hills become nothing but a green blur as your eyeballs rattle in your head. It's hard on your bike too. I suffered two punctures, had two tires start to roll off the rims, was cut repeatedly by a frayed gear cable and had the seatpost collapse into the frame.

But every time I felt close to collapse from the constant climbs and juddering, a food stop magically appeared. Wonderful beef stew, jam tarts that provided a much needed sugar boost and a few cheeky glasses of Chianti took my mind off the pain. Riders who a few minutes earlier had been battling away to put in a good time suddenly forgot their ambition and stood around casually chatting and eating. Perhaps they had just been sprinting to spend more time here?

Tearing myself away was not easy, but I was rewarded with a downhill run for the last several miles. Falling into a rhythm, I overtook a few riders, got braver on the rougher sections and changed all the way up to the highest gear. Rolling into Gaiole felt to me like winning a stage of the Tour.

I can recommend the race for the food, scenery and company - but this short moment of escapism is worth the journey alone. And I suspect it is why these riders come back.


Stories for the Italian Cycling Journal about rides, granfondos, having a good time cycling in Italy, Italian cycling history, etc. are very welcome. Contact me at veronaman@gmail.com. There are more than 1,600 stories in this blog. The search feature to the right works best for finding subjects in the blog. There is also an Italian weather widget along the right side and a translate button at the bottom so you can translate each page. What I'm riding.
Posted by Angelo senza la o at 6:05 AM