2011 L'Eroica: Riding with the Heroes

My thanks to my friend over at Travels with a Tin Donkey for this excerpt from his 2011 L'Eroica adventure. The full story is here.

L'Eroica 2011: Riding with the Heroes

"Sunday, October 2: We got up at 4:30 and drove the car, bikes and stuff for the day in the back, back to Gaoile for the start of l’Eroica. It was pitch dark but already the village was active as those starting the long routes (205 and 132 km) were getting ready to leave. We were directed to a parking place next to a warehouse and quickly got the bikes set up and headed to the start line. Everyone leaving this early was supposed to have lights. Bernd had a good strong light mounted to his helmet and I had a LED light on the handlebars, as well as a highly-visible taillight under the seat. I was wearing armwarmers and long-fingered glove liners because it was quite cold but I knew in a short while we would be sweating. We pulled up to the control stand and had our cards stamped and at 6:10 we officially departed for the 132 km course of l’Eroica with some trepidation.

Leaving the town and following the trail of blinking taillights, I soon realized that I could barely see anything and began to wish I had brought my regular glasses. I can see well enough with non-prescription sunglasses during the day but nothing at all was visible. I was just grateful that the roads were so well-paved that potholes were not a concern. As it was I rode much more slowly than I had planned at this stage. 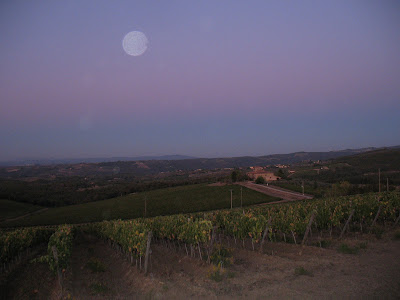 After some time passed (and I had no real idea how much), the course turned and we were suddenly on a steep gravel climb. I was to learn later that this took us up to the castle of the famous Brolio wine estate but it was enjoyable to climb in the darkness, our way lit by oil lanterns burning on both sides of the road all the way up. It was still cold but surrounded by other cyclists and the sound of whirring gears made the climb a unique experience. 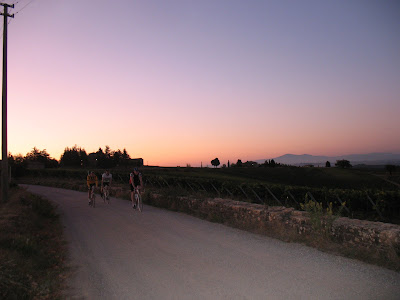 The sun rose around 7:15 and it began to warm up. The gravel roads were not too bad, although there were some soft and sandy parts to watch out for, along with dust, but we made decent progress. The road constantly rose and fell and there was a startingly steep (but blessedly short) climb around the 20 km mark which must have been a 20 percent grade. My gearing was fine for this but the pedal/shoe combination was to give me some trouble for the rest of the day and I rode all the descents in the drops, getting as much braking power as the pathetic Weinmanns were up to. 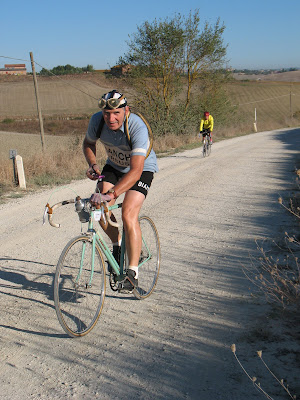 Bernd was riding a bit ahead of me and I was riding for a while with a young Englishman on a very nice Mercian. The gravel was loose and as we came around a corner he lost traction and went down in a great cloud of dust. No damage to himself or the bike but it just showed how difficult the roads are. This was his fourth l’Eroica. 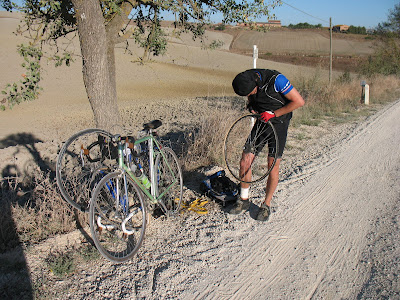 I caught up to Bernd soon after since he was standing by the side of the dusty ride, his tubular tire off and struggling to put on his spare tire. It was my first experience with tubulars and I found it quite instructive as he placed the glue tape on the rim, got most of the tire on, stripped off the top layer of tape to explose the glue and then rolled the last tire on. This sounds easier than it was as tubular tires do not want to go easily onto rims, but between the two of us we managed it. The dust was probably not ideal for the gluing surface either but it seemed to be okay.

We skirted around Siena (a bit disappointing as I hoped to see something of the famous town) and a few more climbs and descents brought us to Radi at Km 48 and 9:40. It was a bit startling to take 3 ½ hours to go 48 kms without having walked but the road conditions had not been ideal." 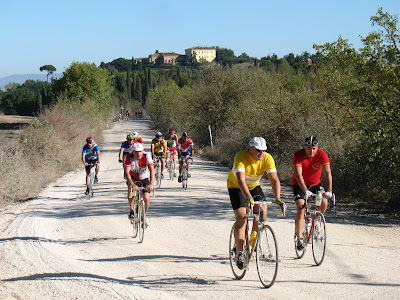 Stories for the Italian Cycling Journal about rides, granfondos, touring, having a good time cycling in Italy, Italian cycling history, etc. are always welcome. Contact me at veronaman@gmail.com. There are more than 2,100 stories in this blog. The search feature to the right works best for finding subjects in the blog. There is also a translate button at the bottom so you can translate each page.
Posted by Angelo senza la o at 6:00 AM

Email ThisBlogThis!Share to TwitterShare to FacebookShare to Pinterest
Labels: 2011 L'Eroica