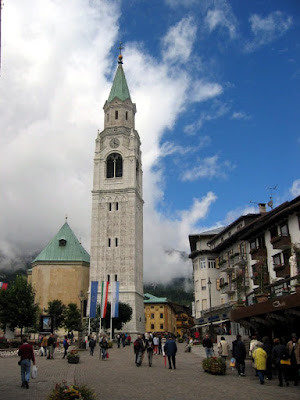 With Stage 17, 23 May 2012, of the Giro d'Italia finishing in Cortina d'Ampezzo, Larry and Heather from CycleItalia have been nice enough to share one of their favorite loops starting in Cortina. As a reminder to ICJ readers: ride stories are always welcome, share your story.

"Here’s a challenging loop from Cortina we’ve used in the past as part of our Legendary Climbs Series.

Visit Cicli Cortina for low gears if you’ve not fitted them already. Our rental machines feature 30-26 or 34-29 and we think it’s better to have gears lower than you need rather than vice-versa, especially at the end of the day. 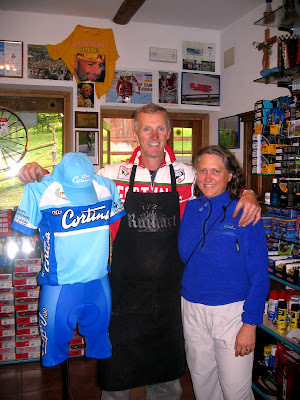 Depart the “Queen of the Dolomites” south towards Venice. As you enter Venas di Cadore after around 25 kilometers, turn right (a hard right, easy to miss) towards Cibiana. You’ll feel like you’re dropping of the face of the earth as you descend and you’ll quickly realize you’ll be making all this up soon enough on the climb. You’ll climb for just over 10 kilometers, mostly in the shady woods with a few ramps with double-digit grades, topping out around 1536 meters at the rifugio, a great place for a caffe, or something more if you didn’t take on enough at breakfast.

A technical descent will take you past some Merckx-era graffiti before you begin the climb of Forcella Staulanza, in the same direction as the upcoming Giro d’Italia. This climb’s a bit more mellow than Cibiana in our experience, with splendid views as you climb above the tree line to the summit at 1773 meters. Enjoy pranzo at the Rifugio Staulanza and don’t miss the casuncei, pillows of pasta filled with cheese and red beets and served in a butter and poppy seed sauce – their specialty. 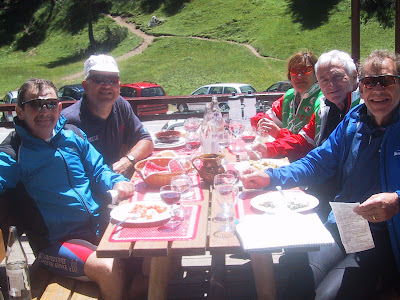 Remember you’ll have a fun and sweeping descent to help with digestion, but it’s probably better to save the dessert to celebrate your arrival at the top of the final climb, Passo Giau.

You’ll be savoring the thought of some wonderful strudel as you grind up the steep (pretty much 10 kms at 10%) ramps of this “hard” side of the Giau with the previous passes beginning to be felt in your tired legs. Perhaps you’ll reward yourself with, in addition to the amazing views from 2236 meters (often the Cima Coppi or highest point of the Giro route) what one of our guests used to call the trifecta – strudel and a hot chocolate, washed down with a coke! 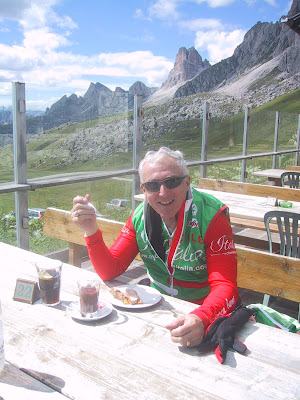 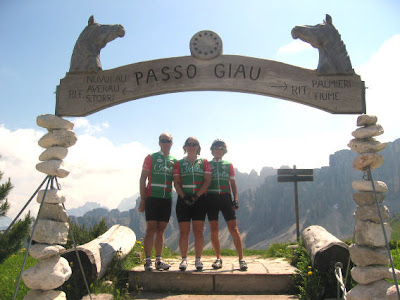 The descent from Passo Giau tends to be more of what Larry calls a “braking contest” with mostly straight ramps linked by hairpin turns rather than sweeping bends, not nearly as much fun as the Staulanza and often covered with the feces of our bovine friends who graze here in the summer months. Be careful!

Before long you’re making the small climb up to Pocol where you turn right and descend back to Cortina and your hotel. Our favorite (and one we still use) is Hotel Ambra in the center of the town. You’ll have earned a great dinner after enjoying 99 kilometers and 2643 meters of climbing and there are plenty of ristoranti and pizzerie to chose from in the lively town, home of the 1956 Olympic Winter Games."

You can also read about another "favorite loop" that begins in Arabba and passes through Cortina: Luisa's Favorite Ride: Cortina d'Ampezzo Loop

Stories for the Italian Cycling Journal about rides, granfondos, touring, having a good time cycling in Italy, Italian cycling history, etc. are always welcome. Contact me at veronaman@gmail.com. There are more than 2,100 stories in this blog. The search feature to the right works best for finding subjects in the blog. There is also a translate button at the bottom so you can translate each page.
Posted by Angelo senza la o at 6:14 AM