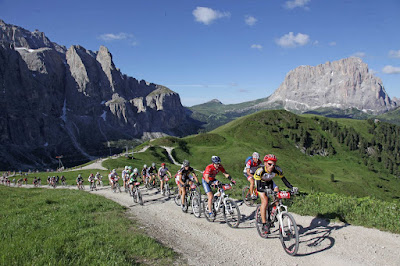 "The race organization is under way! The date is fixed for Saturday, 23rd June. The route will take competitors on a fascinating route across the Dolomites, a UNESCO World Heritage Site. The maximum number of participants will be 2012, so allowing a charitable draw to be organized around the last race place.

Race registration will be open from Tuesday 25th October 2011 and applications can be made on-line. Yes, the third edition of the HERO, as it is now commonly known in race circles, is well and truly upon us! A star was born in 2010 and in July 2011 it really began to shine bright. After two editions of the event we can confidently say that the HERO has taken its place as one of the most important competitions in the mountain bike race calendar. Certainly it is regarded as an extreme and grueling event but also as a fascinating and appealing one, this due to the unrivaled beauty of the Dolomite landscape, UNESCO World Heritage Site, in which the event takes place. The route the HERO takes is real special, both for the magnificence of the setting and the immersion in nature into which the athletes plunge themselves. And just for a moment to reflect back on the second edition of the Südtirol Sellaronda HERO, we cannot forget the success enjoyed in terms of numbers and quality of the riders taking part. Proof of such affirmation is in the fact that registration closed a month before the event on reaching 1,500 registrations, these coming from 28 counties across 5 continents. Amongst the elite athlete group featured Mirko Celestino, number 1 in the world rankings for the “marathon” distance, who duly honored the event by coming home in first place. So now, full of enthusiasm from past memories we look forward to the next race day on Saturday 23rd June 2012.

The Organizing Committee has set as a target 2.000 race registrations. In fact a few more besides, for the actual number is 2012, this number coinciding with the year of running so as to allow a charitable draw to be organized around the last place. The organizing committee, led by Gerhard Vanzi and Peter Runggaldier, have determined that the ‘last and final place’ will be auctioned and that the sum collected will be donated to Assisport Alto Adige, the South Tyrol association which supports young sporting talent. Two local champions “made in Südtirol”, Gerhard Kerschbaumer (already World Junior champion) and Julia Innerhofer, (Italian national mountain bike team member and winner of the bronze medal in the recent World championships in Chàmpery, France) are lending their name and support to the initiative. As for the qual

ity of the field confidence is high that the cream of the crop will turn out in plenty on the 23rd June, this thanks to the trust that the international federation is showing in the race. The Südtirol Sellaronda HERO is now part of the UCI calendar and this will no doubt raise the international profile of the event and represents a further pass towards making the HERO something of real prestige. And on the back of the response to the second edition the Organizers have decided to try and attract more than 2000 to the start line, and to ensure that there are representatives from at least 30 countries in 5 continents. The HERO is aiming high. Proud in the knowledge that it has several successful ingredients. One ingredient is without doubt the unrivaled beauty of the route across the Dolomites, UNESCO World Heritage site, a demanding route indeed but perhaps one which offers some solace to riders. The inspirational nature of the landscape is difficult to tell in words, but the proof for all to see will again be clear for all to see in the new video-spot being prepared for the 2012 registration launch and which is available on the Organizers site at www.sellarondahero.com.

The total prize money for the Südtirol Sellaronda HERO is intended not only to benefit elite riders but also to recognize the efforts of the “hobby” category. This next year’s prize money will total 45.000 euro – another HERO record!. For other aspects of race organization one can apply the motto “Never change a winning team” in that the race routes will remain the same – the longer one being 82 kilometers with 4.200 meters in altitude difference and the shorter one 50 kilometers with 2,600 meters in altitude difference, both with start and finish in the heart of Selva Val Gardena (1.563 meters a.s.l.) Don’t forget to look out for the side support events such as the HERO KIDS, an important preparation for the champions of tomorrow, and the Sellaronda Bike Day on Sunday 24th June when thousands of cyclists will enjoy the Dolomite roads, closed to traffic for the “Sellaronda Bike Day 2012”." 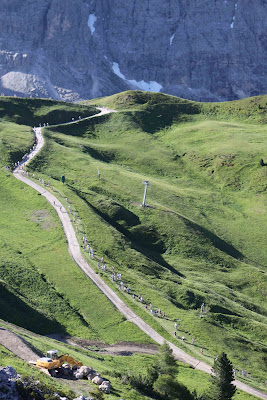 Stories for the Italian Cycling Journal about rides, granfondos, touring, having a good time cycling in Italy, Italian cycling history, etc. are always welcome. Contact me at veronaman@gmail.com. There are more than 2,100 stories in this blog. The search feature to the right works best for finding subjects in the blog. There is also a translate button at the bottom so you can translate each page.
Posted by Angelo senza la o at 4:49 AM