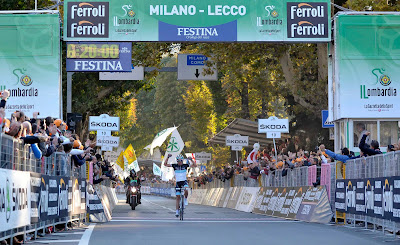 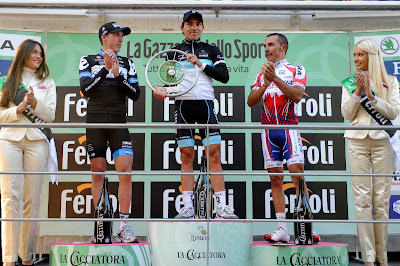 "It was a surprise for me and for the team," said Zaugg. "I had a chance and I was able to gain the maximum result. I still cannot believe what I did. Honestly, I had this attack in mind since last week, I rode very well but I was also lucky to grab this opportunity of a lifetime. Maybe something will change in the way I race because of this success, it surely gives me the conviction to win many more races. I hope so!".

The race will also be remembered as the first and last classics race win for Leopard Trek.

Vicenzo Nibali (Liquigas-Cannondale) had the tifosi cheering him on for an Italian victory on the slopes of the Madonna di Ghisallo as he launched an attack. At the top he was by himself with a lead of 1'40". Nibali was finally caught 35 km later on the early slopes of the final climb of Villa Vergano. Zaugg went on to win with a fierce attack on the climb. Nibali finished 40th, 7 minutes down. 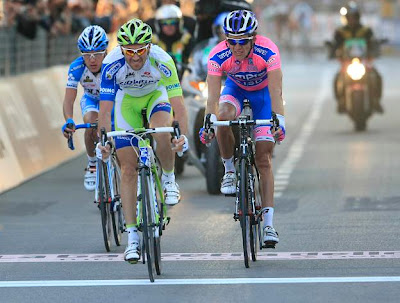 Team Lampre-ISD best finish came from their first season Polish rider Przemyslaw Niemiec who came in 5th, same time as Basso, at 8" to the winner Zaugg. Damiano Cunego, the last Italian winner of the race in 2008, was 27th.

Stories for the Italian Cycling Journal about rides, granfondos, touring, having a good time cycling in Italy, Italian cycling history, etc. are always welcome. Contact me at veronaman@gmail.com. There are more than 2,100 stories in this blog. The search feature to the right works best for finding subjects in the blog. There is also a translate button at the bottom so you can translate each page.
Posted by Angelo senza la o at 6:52 PM