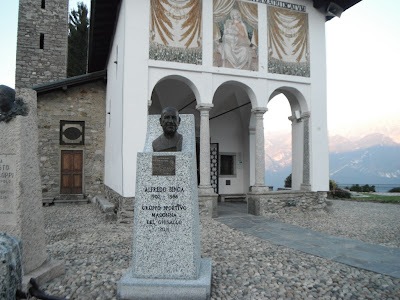 Jac Zwart, author of the Dutch language book "Wielermonumenten - Reisgids door de geschiedenis van de wielersport" (Cycling Monuments - Travel Guide through the History of the Sport of Cycling), sends in another one of his excellent contributions to ICJ. He writes, "Apparently 2011 is a good year for new cycling monuments and especially in Italy where quite a lot of new memorials have been installed recently.

Just before the professionals climbed to the chapel of the Madonna del Ghisallo in last classic of the season, the Giro di Lombardia on October 15th, a bust for Alfredo Binda had been placed alongside those for Coppi and Bartali to celebrate that Binda had passed away 25 years ago.

Alfredo Binda is one of the icons in the history of Italian cycling. He was the first professional world champion (in 1927) and repeated that victory in 1930 and 1932. He is one of the few who were able to perform like that. Only Rik van Steenbergen, Eddy Merckx and Oscar Freire managed to do the same. In his career Binda won at least 110 highly ranked races. Most of them were in his home country because abroad he was less successful. His victories, in addition to those world championships, iclude the Giro di Lombardia (4x), Milano-Sanremo (2x) and four national titles. He won five editions of the Giro d'Italia and 41 stages in the Giro, a record that has only been beaten by Mario Cipollini in 2003.

As the story is told, Binda is the only rider that has ever been paid not to start in a race. After he had won twelve stages of the fifteen in the Giro in 1927 and in 1929 eight, the organization offered him the amount of 22.500 lires if he would refrain from starting, afraid as they were that the interest from the public would vanish (and the number of sold copies of the Gazzetta dello Sport would decrease significantly). To the contrary, Henri Desgrange offered him money in 1930 to come and start in the Tour de France. Binda won two stages in the Pyrenees, but gave up later and returned to Italy. It was his one and only appearance in the Tour. Binda was mostly a good-humoured person, who played trumpet, and who had a brilliant style of riding. René Vietto once said that you could put a glass of milk between his shoulders and that on arrival he wouldn't have spoiled a drop.

After he resigned, he became a sporting director. Due to his diplomatic skills, he managed to convince Coppi and Bartali to forget their rivalry and cooperate in the Tour of 1949."

Stories for the Italian Cycling Journal about rides, granfondos, touring, having a good time cycling in Italy, Italian cycling history, etc. are always welcome. Contact me at veronaman@gmail.com. There are more than 2,100 stories in this blog. The search feature to the right works best for finding subjects in the blog. There is also a translate button at the bottom so you can translate each page.
Posted by Angelo senza la o at 1:15 PM