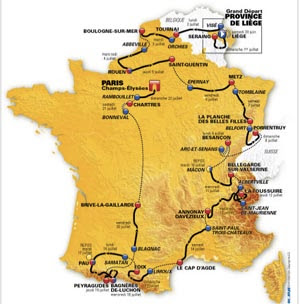 The 2012 Tour de France route, presented this this morning in Paris' Palais des Congrès (the route for 2012 had already been mistakenly disclosed earlier last week) casts the spotlight on the potential of intermediate mountain ranges. Christian Prudhomme has turned to novelty and to the cyclists' fighting spirit to keep the race for the Yellow Jersey open for as long as possible.

Start: Liège, Saturday, June 30, 2012. This will be the fourth time that the Tour de France kicks off in Belgium, a country which has always known how to instil a sense of panache into the peloton. It is precisely this sense of courage which inspired the design of the route of the 99th edition, one in which fortune will favor the bold, even in places where no-one expects it. Punchy riders will get their chance to shine on the rolling terrain of the Province of Liège and, later, Northern France. Those vying for the final victory will be able to go head-to-head before the end of the first week. They may even be able to open gaps if they make the most of the mountaintop finish at the Planche des Belles Filles (which makes its debut in the Tour) or the finale of the Porrentruy stage, right in the heart of the Swiss Jura.

While the favorites to win the Tour will be expected to dig deep on mountains which until now were labelled "intermediate", they will also have their work cut out for them on the Alpine and Pyrenean stages, whose profiles are especially dynamic. The 140-km-long stage between Albertville and La Toussuire - Les Sybelles will offer no respite to those poor riders who choose to play the waiting game. In the Pyrenees, the discovery of the Mur de Péguère, right before diving to Foix, together with the Aubisque-Tourmalet-Aspin-Peyresourde sequence on the Bagnères-de-Luchon stage and the Peyragudes summit finish, will give climbers the opportunity to shine. Cyclists will have no choice but to spring into action at the decisive moments. Indeed, the Liège prologue and the time trial stages in Besançon and Chartres will force them to defend their positions in the race against the clock over a combined length of more than 100 kilometers.

Asked if the route suited him, this year's winner Cadel Evans said: "I think so, you need a good team there for the GC (general classification), but we have that. I think the second half is favorable towards me. There are longer time trials, and they are a little bit flatter this year so that's a little more favorable to the 'rouleurs'."

Andy Schleck's impression was, "There's still 25 mountain passes to negotiate, and there were 23 this year. It will be hard in the mountains, but there's a lot of time trialing and that's something I'm currently working on. Ideally I would like to see another mountain top finish and one less time trial. But I have to take things as they are and keep on working on my time trial."

The 2012 TdF has the following aspects: 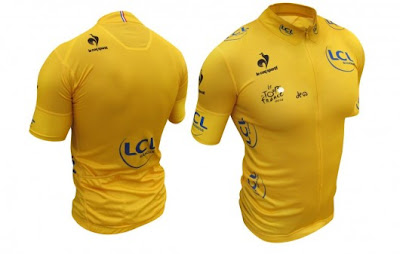 Stories for the Italian Cycling Journal about rides, granfondos, touring, having a good time cycling in Italy, Italian cycling history, etc. are always welcome. Contact me at veronaman@gmail.com. There are more than 2,100 stories in this blog. The search feature to the right works best for finding subjects in the blog. There is also a translate button at the bottom so you can translate each page.
Posted by Angelo senza la o at 5:23 AM