Too Much Monte Grappa

My thanks to Julie Gildred, founder of Ride Strong Bike Tours (www.ridestrongbiketours.com), for her story of cycling Monte Grappa.


Too Much Monte Grappa 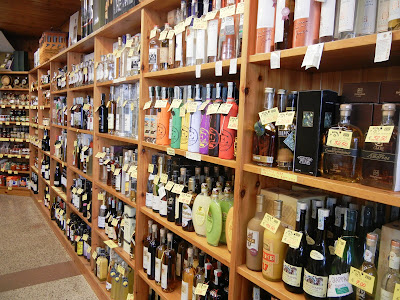 "I used to have fond memories of Grappa. It reminded me of a time well over a a decade ago when I had a love affair with a man who preferred it. Something about getting the quickest buzz with the least amount of alcohol. In its simplest form, Grappa is fire water made from the leftovers of the winemaking process (the stems, skins and seeds of the grapes). While there are now thousands of different varieties of Grappa, they are all stiff ranging between 35% – 65% in pure alcohol.

Bassano del Grappo in the northern Veneto region of Italy is the heart of Grappa making country. I would argue the most prominent and potent feature of Bassana del Grappa is not the Grappa itself but the mountain rising up just to it’s north – Monte Grappa. Unless you’re an Italian World War 1 buff, hiker or professional cyclist you probably haven’t heard of this massif. But amongst locals and cyclists in the know, Monte Grappa is a climbing paradise. 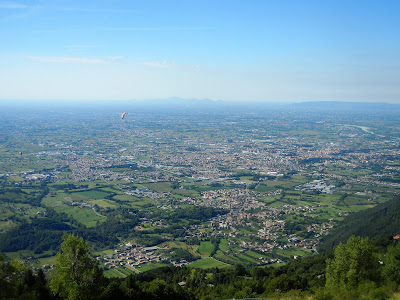 I woke this morning in my inexpensive Italian villa in Crespano del Grappa and decided I’d give Grappa a go. I had a rough plan of riding up to the summit, descending a different route and continuing onto a more gentler 80 km day through the towns of Asolo and Bassano for a beer.

Of the alleged 9 different paved ascents of Monte Grappa, I got my first taste just 6 km down the road in Semonzo. As I geared down, a rush of adrenaline filled my legs. Feelling fresh I spun past several other cyclists (albeit older and wider than myself), soaking in the panoramic views of the Veneto valley below. Between each hairpin (‘tornate’ in Italian) where the road gave respite, the slopes got steeper and shots of adrenaline were running out. Spray-painted on the road were various kilometer markings to the summit but they counted up, not down. I had no idea how long I’d be at this slog. 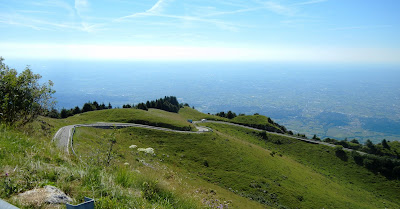 After the Vacancsoleil rider motored past but before I had a clear view of the summit I resolved that my choices were limited. I could only go so fast. There were more ups and downs that really give you a false average profile and then turning the corner I could see several switchbacks to the top. The last few kilometers riders approach from all sides and it’s a bit reminiscent of Ventoux only more confusing and more beautiful.

To the left of the parking lot there’s a large war sanctuary holding the bodies of 10,000 Italian soldiers killed during the battles in WW1. On the other side are more tombs of Austrian-Hungarian soldiers, statues and flags. I opted to take in only the endless views. The chain of the Dolomites to the north and the plains of Veneto and even Venice to the south. 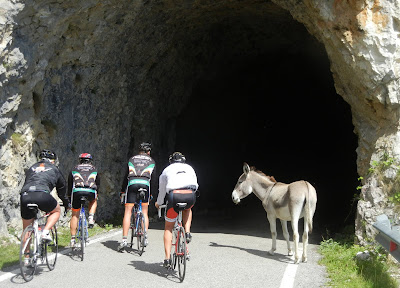 Now, it was time to find my alternate route down. From the cemetery I retraced my steps 3 km down to a largely unmarked intersection. There was no indication that this road would not turn into an unpaved goat path so I hesitated long and hard until 5 road cyclists flew past. I followed. The road didn’t turn into a goat path but it did turn into a paved mule path. It’s so narrow that a small car and a cyclist cannot share the road simultaneously. Add in the wild mules, rock tunnels and sheer cliffs and the scenery was off the planet.

But I had had too much Grappa. This became abundantly clear when the mule path ‘descent’ kicked back up into a 13-15% grade. I had absolutely nothing left. At the top of the second surprise ascent, the gang of 5 stopped at yet another unmarked intersection where a smaller road fed into and literally off of the cliff. After a brief Italian pantomime discussion the boys confirmed that this trail was my road down! They warned me of 20% grades and the such so I took a big gulp, dropped to my bars and took notice of the sign saying something to the effect of ‘this road is not maintained, go at your own risk’. I went. 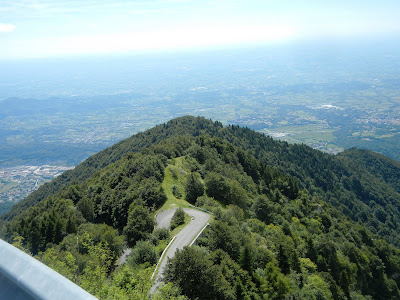 Gulp - the way down!

After the first few hair raising turns and 20% grades down, the road narrowed into the tunnels of maple trees and pines. Perhaps it was all the war history I was reading about but it reminded me of being on the Ho Chi Minh trail. Simultaneously, I felt like I was in the middle of nowhere but still on top of the world. A few more unmarked turns, good guesses and a car full of Austrailians looking to go eat some snails, I landed right back in Crespano del Grappa and hung up my riding shoes for the day.

Be sure to use the search feature in the upper right margin for "Monte Grappa" to find more related stories.

Stories for the Italian Cycling Journal about rides, granfondos, touring, having a good time cycling in Italy, Italian cycling history, etc. are always welcome. Contact me at veronaman@gmail.com. There are more than 2,100 stories in this blog. The search feature to the right works best for finding subjects in the blog. There is also a translate button at the bottom so you can translate each page.
Posted by Angelo senza la o at 7:02 AM