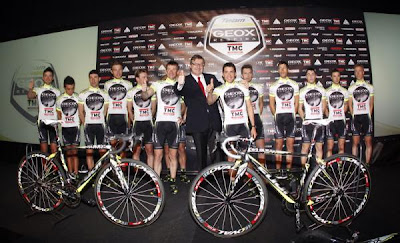 GEOX, the primary sponsor of the GEOX-TMC team, has decided to exit cycling after one year.

Despite having signed Carlos Sastre and Denis Menchov as team leaders the team was not selected in November, 2010, as as UCI ProTeam (formerly ProTour) for 2011, instead being named a UCI Professional Continental Team. At the time Mauro Gianetti, the manager of the Geox-TMC team, bitterly criticized the way the UCI had awarded ProTeam places for 2011 after his team missed out on one of the 18 slots. The decision meant the team could only hope that they would receive invitations to the major races rather then being guaranteed entry. The team did race in the Giro d'Italia and Vuelta a España as a wild card entry, it was not invited to the Tour de France.

The Vuelta a España was won by GEOX-TMC rider Juan Jose Cobo who renewed with the team for another year just last week. Cobo was optimistic about next year saying, "It’s still too soon to talk about our plans for next season. However in 2012 I’d like to take part in the Tour and get to this race in the best shape possible. The Tour has a unique appeal and it has always been the most important race. But it also means a lot to me to get back to my “home roads” for the Vuelta España, where I had a fantastic experience this year, the best in my career.”

Now, riders are left with trying to find another team after the period in which many of the transfers for the next season have already been negotiated. Cobo's situation is especially miserable as cyclingnews.com noted, "However, since the announcement of the sponsor's exit came after the October 15 deadline to submit rider contracts to the UCI, the riders' points will likely not be counted toward his new team's rankings toward the WorldTour, making Cobo's Vuelta win essentially worthless."

It's a tough sport on so many levels.

Stories for the Italian Cycling Journal about rides, granfondos, touring, having a good time cycling in Italy, Italian cycling history, etc. are always welcome. Contact me at veronaman@gmail.com. There are more than 2,100 stories in this blog. The search feature to the right works best for finding subjects in the blog. There is also a translate button at the bottom so you can translate each page.
Posted by Angelo senza la o at 5:05 PM

Email ThisBlogThis!Share to TwitterShare to FacebookShare to Pinterest
Labels: Geox-TMC