A Visit to Pegoretti Cicli

Paul Hart from England writes in with his story about his recent visit to Dario Pegoretti. We previously had published a photo of Paul's beautiful "Responsorium" model Pegoretti here.

A Visit to Pegoretti Cicli 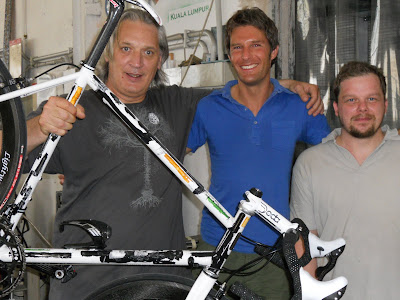 I recently treated myself to a one of Dario’s masterpieces and, as Catherine and I had a cycling holiday planned to Lake Garda, we thought a visit to the Pegoretti workshop in Caldonazzo would be nice. One problem - couldn’t find an email address for Dario. So I put on my thinking cap and remembered reading a couple of reports about Pegoretti visits by Angelo on his blog. So I got in touch with him, he came up with the goods and our visit was arranged.

After five or six days riding up and down big hills we decided it was time for a day off. So with the sat nav programmed we headed north towards Trento, when we eventually arrived at Caldonazzo the sat nav wasn’t so helpful and after several u-turns I decided to switch it off and just keep my eyes peeled. Caldonazzo is small so how difficult could it be to find Dario’s place? Sure enough a couple of minutes later I drove across the level crossing glanced over my left shoulder and there they were - the windows with the swallows. 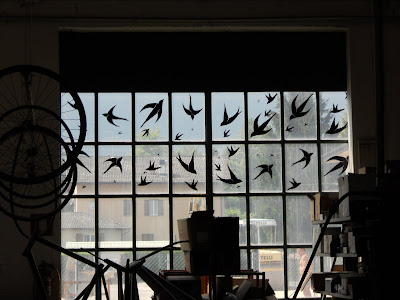 As we peered around the door we were greeted by Daniel and Pietro, then the man himself appeared and ushered us into the kitchen for an espresso and a chat, then it was time for the guided tour of Pegoretti HQ.

The main area of the workshop, where all the prep’ work is done: 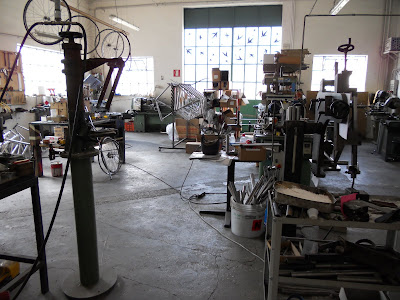 Daniel tacking a frame prior to welding:. 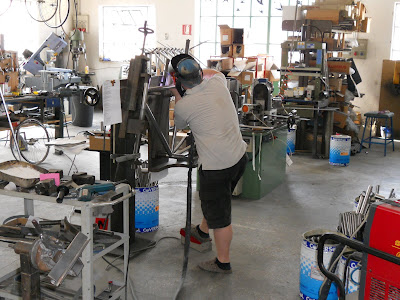 Dario’s office - somehow I just knew it’d look like this: 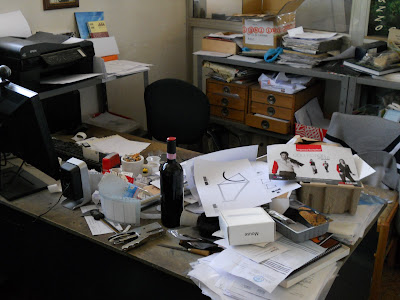 Jack, neglecting his duties as head of security: 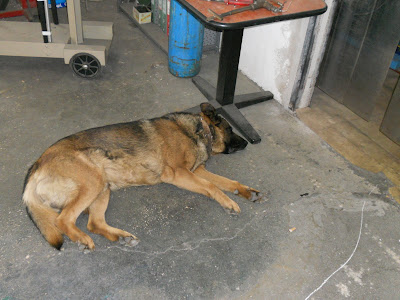 Admiring a couple of recent show bikes - it really is impossible to get tired of looking at these things: 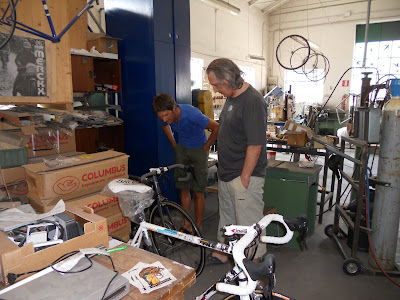 After a look around the paint shop at the works in progress and a few recently finished jobs Catherine asked Dario to measure her for a custom frame. At first he was surprised, I don’t think he realised she was also a bike rider, then he noticed the tell tale tan lines on the legs. With Pietro summoned to assist with ‘misurare’ it was back to the kitchen for the Pegoretti measurement process. 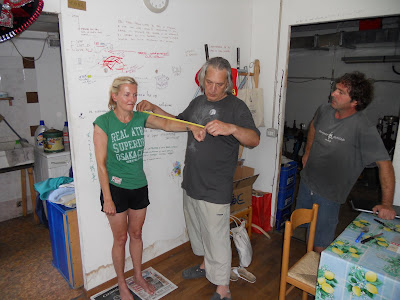 Recently, certainly in England, there’s been a growing trend for bike shops to offer a fitting service, this seems to be done by self appointed ‘experts’ who interview you for two hours then measure every bone in your body with laser beams and computers before making you ride to exhaustion on a stationary bike. As you can probably guess the Pegoretti method is slightly different. It involves a newspaper, tape measure, ring binder (which is thrust hard up between the legs to simulate being on a saddle) and a pair of frame builders, four or five measurements are taken and that’s it……….then a few months later you get a bike that fit’s perfectly. We’re both really looking forward to seeing the finished frame, I think it’s going to be pretty special.

After a few photos with my bike - I think Dario and Daniel liked it and I was surprised at their enthusiasm for bikes despite being around them all day every day - it was time to head back to Lazise and let them get back to work. 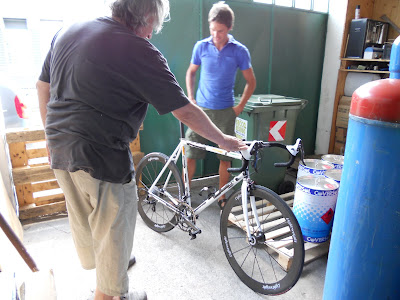 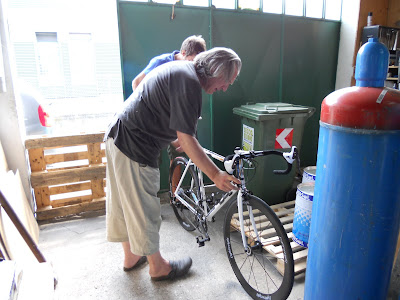 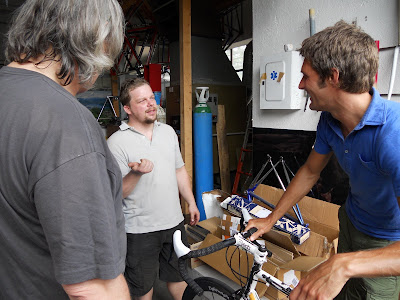 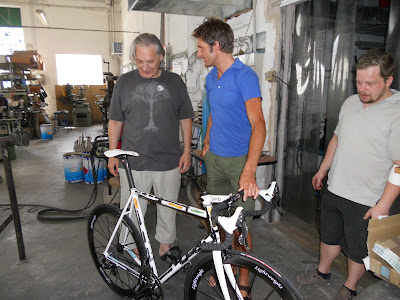 It was a really enjoyable couple of hours and a highlight of our holiday to meet Dario and the boys. Our next visit to Caldonazzo will be in a few months time to collect Catherine’s finished frame.

Stories for the Italian Cycling Journal about rides, granfondos, having a good time cycling in Italy, Italian cycling history, etc. are very welcome. Contact me at veronaman@gmail.com. There are more than 1,500 stories in this blog. The search feature to the right works best for finding subjects in the blog and there is also a translate button at the bottom so you can translate each page.
Posted by Angelo senza la o at 6:22 AM

Email ThisBlogThis!Share to TwitterShare to FacebookShare to Pinterest
Labels: Pegoretti