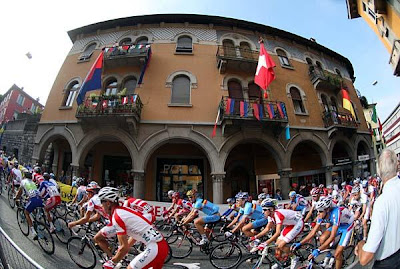 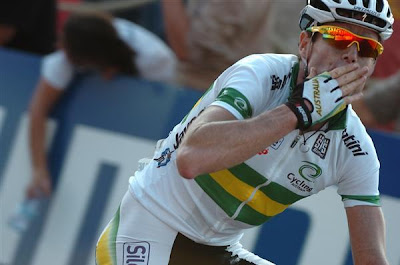 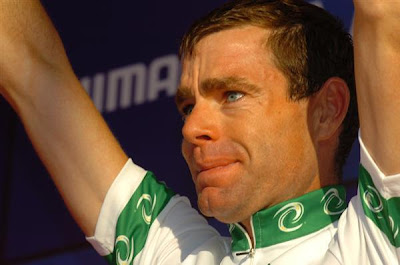 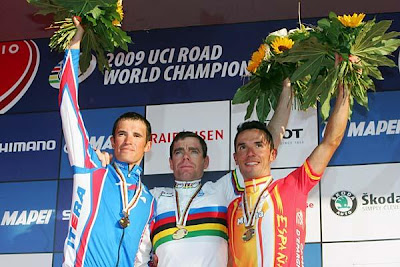 Australian Cadel Evans attacked and took off in the last climb and crossed the Mendrisio finish line alone, ahead of Russia's Aleksandr Kolobnev and Spain's Joaquín Rodríguez. As he crossed the finish line after almost seven hours he blew a kiss to the fans, to his friends and to his people; Cadel lives in Stabio which is a hop, a skip and a jump from Mendrisio. He gave a more intense kiss to the wedding band that hung from his neck and had tears on the podium wearing the champion's jersey.

Evans, 32 years old, is the first Australian cyclist to win the World Championships in 82 years of history of the sport and 76 championships. He attacked in the flats before the Novazzano climb with just five kilometres to go in the race. No other cyclist of the eight that were in the lead group—one of them Cunego—could match the Australian's intensity. Evans, who developed as a cyclist in Italy, first at Saeco and then at Giorgio Squinzi's Mapei under Roberto Damiani and Aldo Sassi, crossed the finish line 27 seconds ahead of Russia's Aleksander Kolobnev, who had won the silver medal in 2007 in Stuttgart behind Bettini, and of Spain's Joaquín Rodríguez. Sánchez came in fourth 30 seconds behind the winner and Damiano Cunego trailed by 53 seconds in eighth place.

"This race was in my home turf," said a very moved and teary-eyed Evans. "This jersey is a great motivator for the 2010 World Championship that will take place in Geelong, Australia, my home town. The win was a response to the criticism that I've been under in recent years because I wasn't winning. However, I have seven medals at home, all of them from mountain bike World Championships, even if none of them is a gold medal. Today is a response to all my results." Especially, in the Tour de France, where he finished second behind Alberto Contador in 2007 and Carlos Sastre in 2008; a week ago, he was defeated in the Vuelta by Alejandro Valverde after a tire puncture in the Sierra Nevada stage, where he lost 1 minute and 15 seconds.

Ballerini's Italy missed their chance to go for an unprecedented fourth consecutive victory in a race that unfolded at a normal pace and without any upsets except for the last two laps. They were especially missing those men who should have tried to stretch out the group in the last lap, like Ivan Basso and Pippo Pozzato. Cunego was left alone to face the attacks of a strong Cancellara, both at the Acquafresca climb and in the descent, although the Verona native did not have the legs to respond to his opponents towards the end of the race, even if he was praiseworthy because of his determination. "You can't always win," he commented.

Fabian Cancellara, who was hoping to become the first rider to win both the TT and Road championships, attacked on the penultimate lap on the descent of the Acquafresca. He was was a key protagonist over the crucial final two laps, though he eventually missed out, crossing the line a disconsolate fifth and bursting into tears immediately after the finish line, slumped next to billboards.

Photos by Roberto Bettini: the peloton, Evans' attack on the last climb, blowing a kiss to his fans, on the podium; Kolobnev, Evans and Rodriguez

Stories, including cycling trip stories, for the Italian Cycling Journal welcome; contact veronaman@gmail.com. See here for a chance to win a T-shirt for submitting a story.
Posted by Angelo senza la o at 6:56 PM