Fausto Coppi and The Lady in White 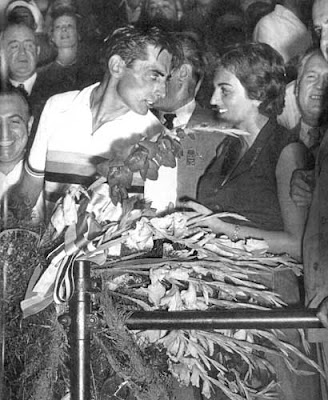 Story by Deirdre Pirro which appeared in THE FLORENTINE.
Fausto Coppi
A game-shooting safari at Ouagadougou in Upper Volta (today Burkina Faso) proved fatal for Fausto Coppi, one of Italy's greatest and most idolized cyclists who, in the 1940s and 50s, was acclaimed by his fans as the Campionissimo or the Hero. When he returned to Italy just before Christmas 1959, after taking part in celebrations for the independence of that African nation with other Italian and French cyclists, he had a fever that he thought was a simple influenza. His doctors thought likewise. Coppi had malaria from which he died, just over 40 years old, on January 2, 1960. The French rider, Raphaël Géminiani, who shared a room with Coppi during the trip also came down with the same symptoms, but, treated in time with quinine, he survived.

Born Angelo Fausto Coppi in Castellania, a small rural village not far from Tortona in Liguria on September 15, 1919, he was one of five children. As a young man, while working as a butcher's delivery boy in Novi Ligure, he met the famous blind masseur, Biagio Cavanna, known as the ‘magician of Novi' or the ‘blind clairvoyant' of cycling who, as his trainer, would mould his future career.

Physically, Coppi was the antithesis of the athlete, although his unusually slow heart beat of 30 to 40 times per minute-about half the normal rate of 70-amplified his stamina. A tall, skinny man with a delicate frame and hooked nose, he was fastidious about his diet and exigent about his equipment. A reserved person, he talked little and smiled rarely.

Italy, which at the time of Coppi's greatest successes was struggling to recover after the cataclysm of World War II, was badly in need of optimism and a new beginning. The Italians venerated him. Their adoration was further fuelled by his legendary rivalry with Gino Bartali, the champion from Ponte a Ema, near Florence, almost his complete opposite in every respect, even down to their religious and political views: Coppi, an atheist, represented the Communist Party while Bartali embodied catholic Christian Democrat ideals.

What the press and his fans could not pardon was that their ‘divinity' had clay feet. Coppi, a married man, made the unpardonable error of falling in love with a beautiful married woman and mother of two small children whom she would leave for him. In 1948, during the Three Valleys of Varese race, Coppi met Giulia Occhini, the wife of one of his most enthusiastic fans and a local doctor, Enrico Locatelli. In 1953, when Occhini, wearing a while duffle coat, was spotted waiting for Coppi at the finish line of the race that crowned him road-racing champion of the world, a French journalist from L'Équipe revealed her presence, calling her ‘la dame en blanche' (the lady in white). In the bigoted 50s, the scandal caused by their relationship was huge, even provoking the Vatican to openly condemn the couple. The tabloids could not get enough of it, falsely painting Occhini as vain, grasping and some kind of a witch who had ruined Coppi's life and career.

In 1954, Coppi consensually separated from Bruna Ciampolini, his wife and mother of his daughter. Locatelli, however, refused to accept the situation and denounced his wife for adultery, then a criminal offence. Occhini was arrested, kept in prison for four days and then forced, while awaiting trail, to reside in Ancona while Coppi's passport was confiscated. At the end of the court case in 1955, Coppi was sentenced to two months in jail while Occhini was given a three-month sentence (both later suspended).

The couple finally married in Mexico, yet the marriage was never recognised in Italy. Their only son, Angelo Fausto Maurizio Coppi, known as Faustino, was born in Buenos Aires on May 13, 1955. Not yet satisfied, Locatelli who was considered the father of the child under Italian law at the time refused, for many years, to repudiate paternity. Then, just when some serenity appeared to have entered their lives, Coppi died, leaving Occhini to bring up their five-year old son alone. Never spared by destiny, at 69, she was seriously injured in a car crash and died on January 6, 1993, after spending 510 days in a coma.

Photo (did not appear with story): Coppi and Giulia Occhini

Stories, including cycling trip stories, for the Italian Cycling Journal welcome; contact veronaman@gmail.com. See here for a chance to win a T-shirt for submitting a story.
Posted by Angelo senza la o at 5:41 PM