Pietro on the Gavia 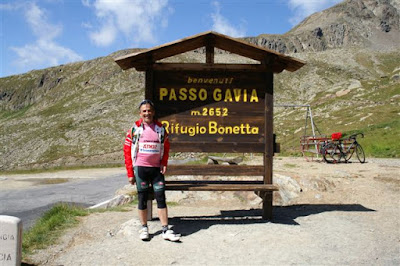 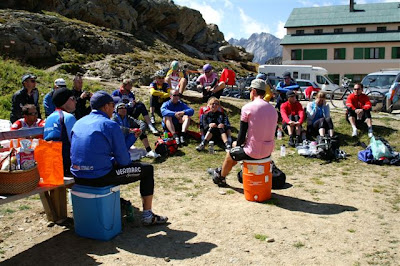 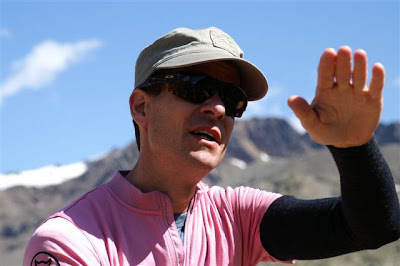 Peter, aka "Pietro", files his fifth, now riding with the Andy Hampsten tour.

I decide to take backpack and put winter vest, long sleeve jacket and long finger gloves in it. I put on knee warmers, arm warmers and Andy’s Maglia Rosa jersey. I don’t want to be cold again. I also decide to wear heart rate monitor strap. This was a good move.

It takes me a while to warmup and naturally the warmup is uphill. I get a sense of my heart rate and I need to keep it below 125. I adjust the pedal cadence to keep heart rate within this limit throughout the climb (except on the steeper sections where I reached 130).

The Gavia climb from Bormio is beautiful. A combination of scenery. The mountains are, as usual, impressive. You look out over the valleys and see houses sprinkled on the mountain side. Wow!!

I’m feeling pretty good. I ride first part of ride with Steve (he lives in Tulsa and will turn 60 in a month or two). I’m a little ahead at the beginning then he is ahead. We stay together up to about 2000 m when he stops to eat. I continue.

Can I attain the Italian climb (feet don’t touch the ground) as Angelo keeps reminding me?

As it turns out, I think the Gavia climb is easier than Stelvio. There are steeper sections but then it flattens out. These small grades and flats give me a chance to recover. I maintain heart rate below 125.

As I climb higher I finally reach a sign that says 10% grade. Ugh!!! This is where my heart rate spikes to 130. I stand. I sit. As it turns out, these steeper sections are not that long. But occurring near the end of the climb, it hurts.

Finally, I get to a sign saying 4.5 km to summit. From here, it is a very gradual climb and even some flats. Legs are fatigued so I’m glad steeper grades are over. Then I reach the 2.5 km sign. Finally, I come around a turn and look into the distance at the summit and it’s UPHILL!!! I just grind away in my 30-29 combination.

Nirvana has been reached, the top. I did the climb with the feet never touching the ground. I climbed the Gavia in 2-3/4 hours and I wasn’t the last one up.

We have a picnic at the summit. Recovery. I can’t each much other than some cheese, soda, juice.

I get my picture taken with Andy by the Gavia Summit sign. I go into the shop on top and buy a really nice Gavia jacket.

And finally, we all gather around to hear Andy tell the story of his and his team’s (Bob Roll, Ron Kiefel, Jeff Pierce, Davis Phiney, R. Acula, etc) epic ascent on the Gavia in the snow, sleet and rain. Actually, he won the race on the down hill because his team had bought all the warm weather gear the day before. As Andy tells it, there was fear in the eyes of all the riders. He could see it. He attacked. He and his team were prepared, went for it and made history. He finished seven seconds behind stage winner Erik Breukind in Bormio.

After the story, it is time to get back on the bike and head downhill. A few of the people went down the other side for 4-5 km to see the old abandoned road which Andy climbed up that day.

On the downhill, I ended up behind a car that did not pull over. My hands were getting tired of breaking when I finally had an opportunity to pass this idiot. The couple from Nashville (Rich and Stephanie) followed. Il Falco (me) was good on the descent. I had to watch out for the rough road. When I got to a hairpin, I would look up to see that I increase my lead on the couple. Finally, we hit some nice smooth roads with no more hairpins. I was flying. On a flatter section, the couple caught me and I sucked their wheel. Then another steeper downhill, I passed and was flying. We cruised into Bormio together. Great downhill.

Tomorrow we take bus to Bolzano, then ride bikes rest of the way to Alleghe (100 km, two passes).

Photos: Pietro, Andy speaking to the group about the day he won the Giro d'Italia, Andy Hampsten