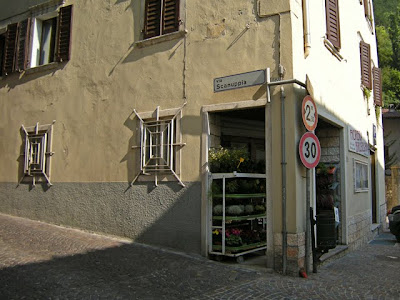 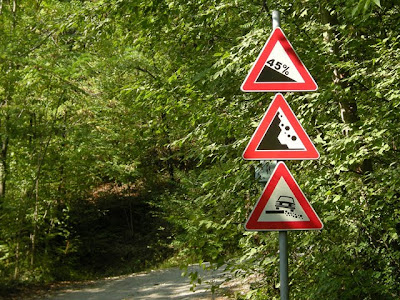 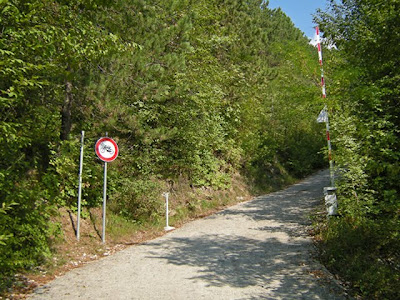 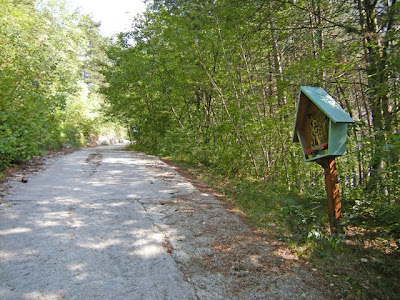 Ken Roberts writes in about his visit to Scanuppia. Before getting on to his comments see my entry here from 2007.

Ken is an avid climber, seeking out the toughest climbs. Ken's story about Scanuppia:

"Steepest, hardest, long climb I've ever attempted. The steepest hardest long climb on a sealed-surface road in Europe (or the world) -- at least I've not yet heard any serious proposal for any sealed-surface road that comes close. I did not succeeding in climbing it -- gave up before I made it even halfway thru the 24% (or steeper?) section. So I actually don't know what's beyond that. I did measure the sustained 24% section I rode with my GPS with barometric altimeter (with auto-calibration turned off).

Beyond what I rode myself and measured, what I know about its steepness comes mainly from
www.salite.ch/scanuppia.asp - (except that the section I measured there with my GPS showed results actually a bit steeper than the same section on that elevation profile). That elevation profile seems to indicate roughly:
-around 12% for about +120 vertical meters as a "warmup"on the wider asphalt road
-around 24% for about +375 meters in lower section of narrow concrete road.
-around 14% for about +135 meters.
-around 17-19% for about +660 meters
-? perhaps further climbing on dirt-gravel after the concrete surface ends ?
(note that the upper +660 meters just by itself would be one of the hardest climbs in Europe)

Also a few months ago I found this road on Google Earth, and calculated steepness from that, and it roughly agreed with the elevation profile on salite.ch. (There's a sign by the road which says "45%", but I regard that is the usual exaggeration of steepness by road-authorities everywhere I visit.)

Limited use? I don't know anything about laws and road usage customs in Italy, but I saw a sign by start of the narrower concrete road which might have suggested that using the road is not permitted for non-local residents . . . 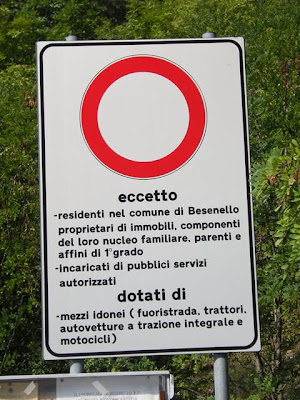 Another way: start in the town of Besenello [ see on map ] which is a ways south from the major city of Trento in northeast Italy. Find the street Via Scanuppia (starts narrow brick, later changes to asphalt) and start riding up roughly northeast for about 400 meters until it meets another road. Bear Right to join the other road and climb roughly east. When get near a processing plant, turn Left onto a narrow asphalt road north over a short bridge - (do not keep climbing up that nice wide asphalt road). Just after the bridge the asphalt ends and the narrow road climbs moderately with the first two shrines along the right side. Soon sharp curve right (east) and there's a gate and then you're riding on 24% steep narrow concrete (soon a third shrine on right). I interpreted the round sign next to the gate to mean "No mopeds or electric bikes" - (but I don't know much about laws and road customs in Italy).

Actually a better (but less interesting) "warmup" for the 24% steep section is instead of going thru the town on Via Scanuppia, instead start from the bottom (west end) of that asphalt road which the Via Scanuppia street meets, a road which runs around the north side of the town of Besenello -- but I'm not sure how to describe getting to it, though I captured at the bottom of that road: latitude-longitude = 45.94963,11.10735 = N45.94963 E11.10735

It's even harder . . . What makes it even more difficult is that much of the concrete surface is not "even". Not that it's "rough" (though in a few spots it is that) -- but that it's "wavy", like with very wide "ripples" in its surface. I suspect the this unevenness is intended to provide better traction when there is snow or ice. So using super-low gearing doesn't solve everything, because you have to maintain enough momentum to carry thru the low zone between "waves" (which might also have some erosion on it). Scanuppia is not just about muscular endurance, also balance and reacting to changes.

Could get hurt . . .Stories I've read about people trying to ride up Scanuppia tend to include the number of times they fell off their bike. The main thing that made me give up was that as my legs got more tired I was more afraid I was going to fall. Therefore . . . Practice getting out your feet out of the pedals quickly. Have a plan for who you're going to fall onto a hard concrete surface without getting hurt. (And if you plan to continue, how you're going to get started pedaling again on such a steep slope). Also how to get back down again. Good to practice in advance how to handle very steep slopes without going over the handlebars -- including the possible need to make a sudden stop on descent because of sudden appearance of an animal or uncoming car. And if it rains or snows, getting down could get dangerous."

You can read more of Ken's European exploits at: http://www.roberts-1.com/b/index.html

Stories, including cycling trip stories, for the Italian Cycling Journal welcome; contact veronaman@gmail.com. See here for a chance to win a T-shirt for submitting a story.
Posted by Angelo senza la o at 10:51 AM