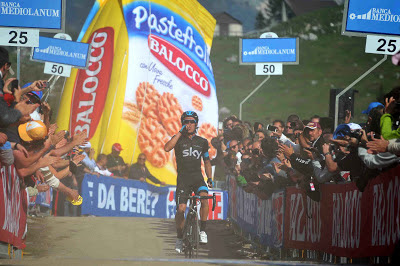 URÁN CLIMBS INTO CONTENTION AT MONTASIO, NIBALI KEEPS HIS HEAD AND HIS MAGLIA ROSA

After a solo attack from the front of the peloton 8 kilometres before the finish line, Rigoberto Urán (Sky Pro Cycling) held off the chase from fellow Colombian Carlos Betancur (AG2R La Mondiale) and Maglia Rosa Vincenzo Nibali (Astana) to win Stage 10 from Cordenons to Altopiano del Montasio (167 km).

Urán moved into the top three in the General Classification, one second ahead of his teammate Bradley Wiggins.

After the stage, the stage winner and the Maglia Rosa spoke to the press.

Who leads Sky now, you or Wiggins? "We’ll have to wait and see. Today was a hard day. After rest day, some riders feel good and others feel bad. It was the first test in the mountains today. This morning we talked as a team and decided that I would attack to see what the response would be. The team is strong, everyone’s healthy. We’re stronger than other teams in the climbs. Today it went well and I hope it continues like this."

Will Wiggins work for you? "He’s a pro. I’ve known him for 3 years. He’s in good form. He’s had one or two physical problems but the team is working well."

Can Nibali be beaten? "Nibali is strong. He’s in great shape, he’s knows the Giro very well, he’s strong in the rain and a great descender on wet roads. He’s in top form. We’ll have to wait for a sign of weakness, and then attack."

The contenders today: "We expected Urán to attack, but we had a good advantage so we didn’t expend too much energy chasing him down. Wiggins lost some time today, but he recovered well. Scarponi, who we might have expected to gain time today, lost it. Evans looked solid and is becoming one of my most serious rivals."

All over for Wiggins?"The Giro is still very long and there are some very important stages to come. For many today, the stage was hard, because you sometimes pay for your day of recovery. Urán and Wiggins are at 2 minutes 04 seconds and 2 minutes 05 seconds, so I’ll have to keep an eye on them both. Then I don’t know – it depends on Sky’s tactics. We’ll try to intuit their moves."

Astana’s ride today: "The team worked hard in the early part of the stage, then Kangert and Agnoli pulled on the last climb. Tiralongo is recovering after being ill, but now Aru has fallen ill. The wet and cold of the Florence stage knocked him out. We’ll try to get him back in the next days. But Agnoli was always close to me today, dropping back to catch his breath when Sky were riding fast at the front."

Ryder Hesjedal (Garmin Sharp), last year's winner of the Giro, was the biggest casualty today. He was dropped early, on the Passo Cason di Lanza, and finished 20:58 behind stage winner Uran. With an eye towards the Tour de France he and team management will decide tonight whether to continue in the Giro or pullout.

Michele Scarponi cracked on the steep slopes to Altopiano del Montasio. "It has not been a good day for me and I perceived that in the early kilometers of Passo Cason di Lanza," said Scarponi. "Considering that I was not in top form I defended myself quite well, also thanks to the help by Niemiec. A bad day can happen in a grand tour, the reasons can be several , but I prefer to focus my attention on the next stages. The podium is only 9 seconds away right now." 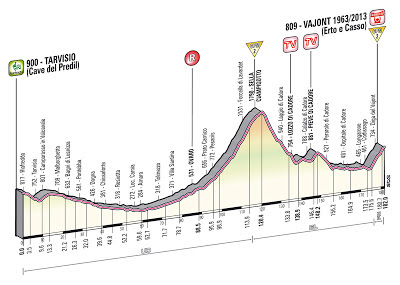 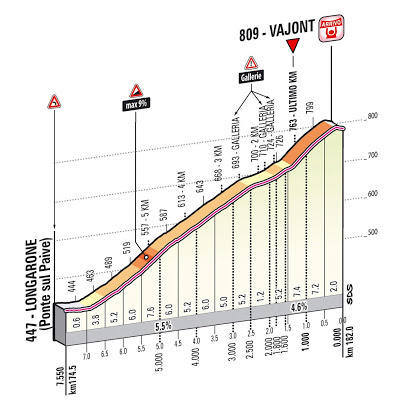 The stage commemorates the 50th anniversary of the disaster of the Vajont Dam in which a landslide in 1963 caused the overtopping of the dam and approximately 2,000+ deaths;  the landslide into the lake created a 200 metre tall wave that brought massive flooding and destruction to the Piave valley below, wiping out several villages completely. Here is what happened: