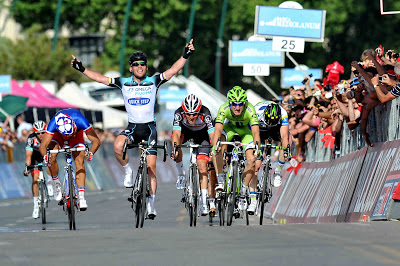 CAVENDISH WINS IN NAPLES AND TAKES THE FIRST MAGLIA ROSA

In the shadow of Vesuvius, Mark Cavendish burst across the finish line ahead of Italian Elia Viviani and the French champion Nacer Bouhanni to win today’s first stage of the 2013 Giro d’Italia (Naples – Naples, 130km). The win brought him the first Maglia Rosa of the race.

"I’m very happy today. It’s not easy to ride at the front, on climbs, curves and cobble stones, at high speed," said Cavendish. "But my team did so all day. They delivered me to the front at the right moment and thankfully I had the speed to finish it off. There were one or two crashes but I don’t think it was excessively dangerous. It’s nice to have a circuit race, and it was a really nice circuit today. I really enjoyed myself. I didn’t expect so many people. "


"Wearing the first Maglia Rosa (designed by Sir Paul Smith), means a lot to me. Two weeks ago we were speaking in his office, and I promised him I’d try my best to win it on Stage 1. Paul’s a great friend of mine. He’s been a great supporter through good and bad and you can see he’s a great cycling fan. I’m really happy to wear it after all the work he did to design the jersey for the Giro."


Viviani was visibly angry that he didn't win as Cavendish came from behind to win the stage, his second place does allow him to wear the white jersey tomorrow as leader of the young rider classification. "I can’t say I’m disappointed because the rider who beat me is the best sprinter in the world,” explained Viviani. “I regret only because it’s the umpteenth time I get so close to the win. And this win, of course, would be the greatest. After Basso’s withdrawal, today Cannondale Pro Cycling showed a strong reaction. We raced a great stage, first with Wurf and then with perfect teamwork in the finale. The white jersey of course is a prestigious symbol but now my mind is focused on the next sprint.” 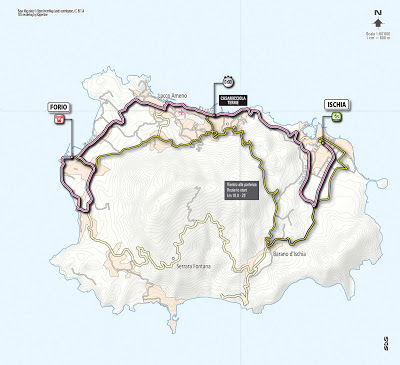 Tomorrow: The Giro will visit the island of Ischia for only the second time. The first was in 1959 for a 31 km time trial stage, Stage 8. It had been anticipated that the winner would be Jacques Anquetil but the surprise winner was Antonino Catalano (Bianchi-Pirelli team) from Palermo, Sicily. Tomorrow's 17.4 km course appears to be quite technical for a team time trial, starting in Ischia and finishing in Forio. Should make for more interesting viewing.