Buongiorno from Stage 10 of the 2013 Giro d'Italia 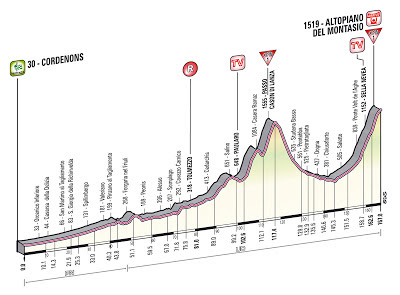 Today: A relatively short stage, at 167 km, complicated by two extremely demanding, Category 1 climbs (several maps published yesterday). The first 100 km of the stage trace a shallow but constant ascent as far as the first Intermediate Sprint at Paularo (km 102.6). Then the climb up to Passo Cason di Lanza (km 117.4) begins, with gradients up to 16%. A short, technical downhill section interrupts up the climb, before the hardest section that leads up to the pass. Beyond the pass, a long descent begins, the upper part on narrow, twisting roads as far as Pontebba (km 132.9), the lower part on less extreme gradients and on wide roads, as far as Chiusaforte (km 145.3). The final climb measures approximately 22 km, with the final 4 km at very high gradients. Last kms: The 11 km consists of steep, challenging climbing. After the bridge over the Torrente Raccolana (156.5), the gradient touches 14%. Between -8 km and the Intermediate Sprint at Sella Nevea (km 162.6) lies a succession of hairpin bends. The right-hand hairpins are in tunnels, with good visibility. After Sella Nevea, the road narrows, For nearly 2 km, gradients exceed 12%, with a maximum of 20%. The final 2 km are uphill, although less steep. The finish line stands at the end of a 60 m straight. The finish line is on asphalt, 4 m wide.

Cordenons, set in the plains of Pordenone province in southern Friuli, is a new stage town for the Giro d’Italia. The velodrome in Cordenons stadium is named after the first Italian to win the Tour de France, Ottavio Bottecchia. Bottecchia was born in the nearby village of San Martino di Colle Umberto (Province of Treviso) in 1894. In 1924 he wore the yellow jersey from start to finish. He won the Tour de France again the following year. He died on 3 June 1927 in mysterious circumstances, at Peonis (km 59.5), during a training ride. At Peonis there is a memorial to Bottecchia. 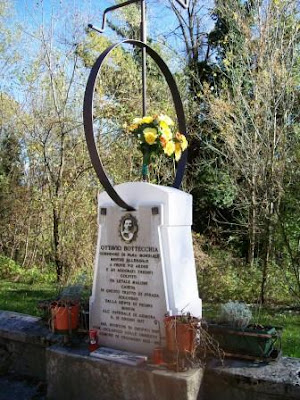