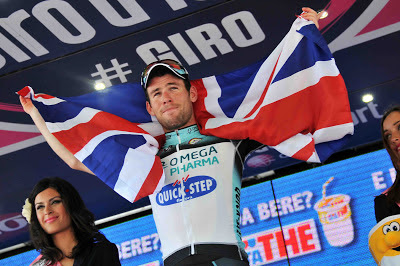 Mark Cavendish (Omega Pharma – QuickStep) has won stage 13, his 101st race victory. He launched a brilliant sprint without any teammates, far from the finish line, that left him slumped at the roadside, gasping for air but victorious.

Vincenzo Nibali (Astana) finished the stage safely having defended his Maglia Rosa against the flurry of attacks that came in the final climbs.

After the stage, the stage winner and the Maglia Rosa spoke to the press.

Mark Cavendish (Omega Pharma – QuickStep), stage winner:
Just doing my job: "It wasn’t a normal sprint today. The stage was long, and there were climbs in the closing kilometres; not easy climbs either. I said I didn’t want to sprint today but the directors told the boys to pull. It’s my job, no? And it’s their job too, so when the director says pull, it’s normal. But I’m lucky because my team is perfect. They are always with me on the climbs, in the sprints, in the wind. It’s impossible to do nothing when they have worked so hard."

Achieving the impossible: "More than physically good, I’m mentally in a good place at the moment. Finally, I know what this team is capable of: they’ve demonstrated it all Giro. So, more than in the legs, it puts me in good form in the head. If they’ve put every single last ounce of effort, I can do miraculous things, things I don’t believe are possible for me. It makes me excited for the next races."

Next sprint stage? "The last stage, in Brescia. Vicenza is described as a sprint stage, but I think the final climb is too hard for me."

Vincenzo Nibali (Astana), Maglia Rosa:
Easier without Wiggins? "The Giro is never easy. In Wiggins’ absence, those of us who are here will dispute the Maglia Rosa. There’s no Hesjedal, either, so from Sky it’s a question of Urán, and then there are Evans and Scarponi. The GC hasn’t been decided yet. Evans is close, so I think I have to do something good. I’m in good shape, so I’ll have to try something in the coming mountains stages."

Can you win a stage? "Winning a stage at the Giro is never easy. I’ll try, but it’s one thing to talk about it, it’s something else to do it. It’s hard to foresee who’ll attack and where in the mountains. The next days promise nothing good in terms of weather. I just hope it isn’t too cold, for the benefit of the entire peloton."

Th weather situation that Nibali refers to is that more snow is forecast in the mountains for this weekend. As I write this , Mont Cenis Galibier have been cancelled for Sunday by French authorities due to snow and the possibility of avalanches. A decision on the ascent of Telepgraphe, on the way to Galibier, is still pending. There is talk of a "mini-tappa" (mini-stage) of 50-60 km in the valley on Sunday as a possibility. The Giro organization hasn't made any official announcements yet. A Spanish cycling group, El Repetxó (gracias!) cycled towards the Galibier summit today as far as they could before the road became impassable:


Of course, this makes tomorrow's stage 14 all the more important.

Back to the results of today before we move on to the maps of stage 14...

Wiggins did not start this morning, saying, "This morning the doctor said 'It's enough'" ; he has had a worsening chest infection.

Garmin-Sharp issued this statement from Ryder Hesjedal who also did not start this morning: "It's heartbreaking. I want to be here for my team and for all the people who have supported me to get me here to this point. I built my entire season around the Giro and I came here feeling great, but I have been suffering since the TT. We're working on it, but we're not sure what's wrong. There's a virus that's been going around, so it could be that, or severe allergies, or going too deep on the TT combined with both – whatever it is, I'm only getting worse. Yesterday's stage was just too much for me, I fought to get through it and I know everyone suffered but after seeing the medical staff last night, I also know that its time for me to go home, get some tests done and get healthy again."

Tomorrow: 168 km from Cervere to Bardonecchia (Jafferau). Mountain stage. Expect Nibalui, Evans, Uran and Scarponi to do battle. Pozzovivo, Betancur, and Henao might also be in the mix for a stage victory. Tomorrow's weather isn't favorable, cold (-2C to 8C) with rain possible. 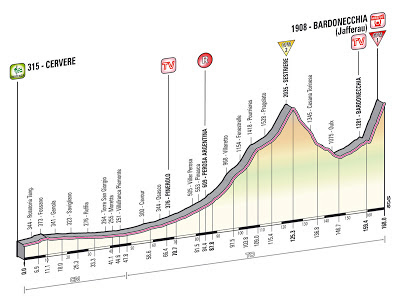 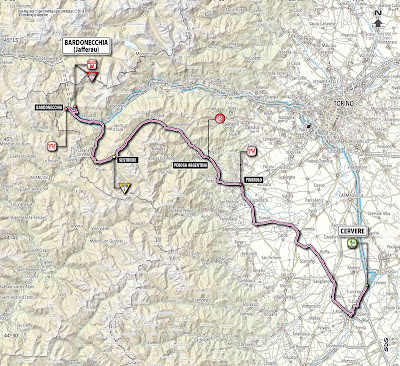