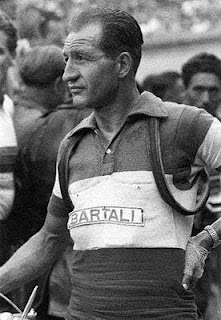 Canal+ has produced a very nice documentary, rich in imagery, about the life of Gino Bartali. The documentary of 25 minutes, El Secreto de Bartali (Bartali's Secret), is in Spanish but the Italian interviews are in Italian with Spanish subtitles. Find the video here.

Gino Bartali's secret was his participation in the resistance during World War II which was only revealed after his death in May, 2000. On April 25, 2005, he was posthumously conferred the "Medaglia d’Oro al Merito Civile" by the President of the Italian Republic.

Bartali carried messages and documents, under the guise of training rides, hidden within the frame of his bike on behalf of an underground network that was pledged to supporting the country’s Jewish population.