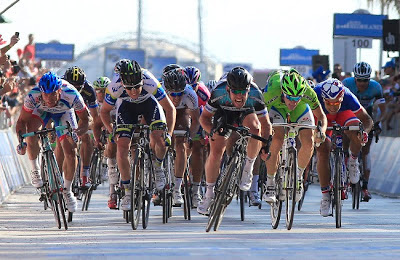 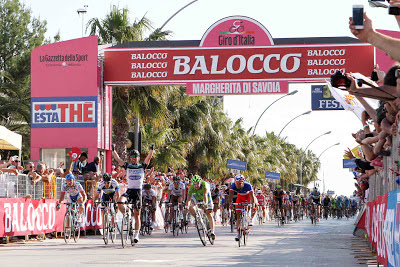 Mark Cavendish (Omega Pharma – QuickStep) won a classic bunch sprint today at the end of stage 6, passing the famous salt flats of  Margherita di Savoia, In a stage marked by a crash that fractured the peloton 17 km from the finish, second was Elia Viviani (Cannondale) and third, Matt Goss (Orica – GreenEdge).

"The crash made everyone nervous," said Cavendish. "All the GC teams, including BMC, Sky, were in the leading group there with less than 3km to go. I just tried to follow Gert Steegmans. There was always going to be a team going too early. My boys waited and waited, and then hit it at the right time. My team was brilliant today. We led the peloton from the beginning. All the guys rode until their legs couldn’t go any more, and that was before the lead out even began. I haven’t seen my team ride for a year now until their legs could go. Gert Steegmans at his best is one of the best lead-out men ever." 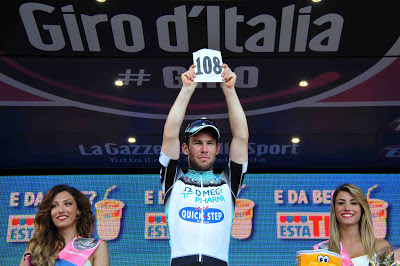 Cavendish held up the race number 108 on the podium in memory of Wouter Weylandt who died in the 2011 Giro d'Italia on this date.

Paolini, Maglia Rosa, about the crash, "Fve minutes before the crash Katusha decided to move to the front to keep the Maglia Rosa out of trouble. Then we were told that there had been a fall, and we slowed down. Me and other riders who are high in GC were near the front, and we took it easy to let the others regain the group." On the individual time trail on Saturday: "The challenge I have set myself is to keep the Maglia Rosa until the individual time trial, so I’ll ride tomorrow’s stage like a one-day classic. I won’t ride the time trial to defend the Maglia Rosa. It would be a bit embarrassing, because the ITT specialists would have a thing or two say about my pedal stroke and position on the bike! But 50 very hard kilometres, riding alone in front of the fans, will be a memorable way of saying goodbye to the Maglia Rosa. My team-mates Yuri Trofimov and Giampaolo Caruso will ride to stay in the top 10 of the General Classification. As for me, I’ll go back to doing what I had to do before: trying to win another stage. I’m in good condition, so I’ll just try to get through the stages that don’t suit me, and I’ll try to win one of the ones that do." Watching Wiggins: "When everyone wants to be in the front it’s a problem for everyone, including Wiggins. But I think these are intermediate stages for the big contenders. I have seen him pedalling very well. On the climb before Matera, his pedal stroke was excellent, so I think he’s in great condition."

Bradley Wiggins was being paced back into the bunch after a mechanical problem when the large crash ahead of him completely blocked the road and caused him to lose valuable time on many of his GC rivals. Sky's Christian Knees view of the crash: "Bradley needed a bike change minutes before that crash, so although he wasn’t involved in it, he did get stuck behind it. The boys did a brilliant job pacing him back on but I got caught up the road. It was so loud in the bunch that I couldn’t hear over the race radio what had happened behind me until it was too late. When I found out I went straight to the front and told the FDJ and Quick-Step guys to stop pulling. They agreed to ease off a little but the pace was still high so the boys had to ride hard to bring Bradley back on. They did a great job and then I moved him towards the front to keep him out of any further trouble."

Tomorrow: 177 km Marina di San Salvo to Pescara. Not a single flat section, which being so short shouldn't cause any surprises....but, yet it very well might. 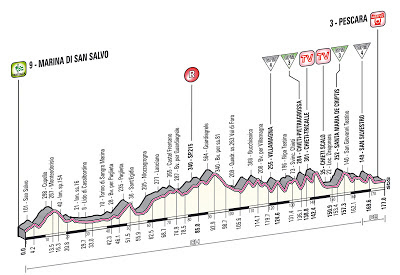 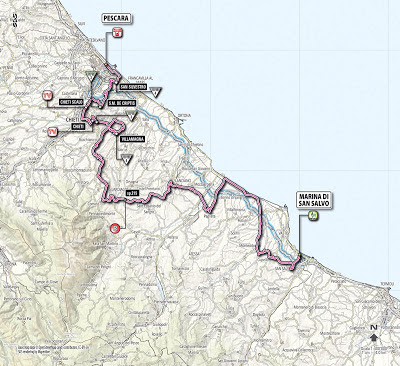