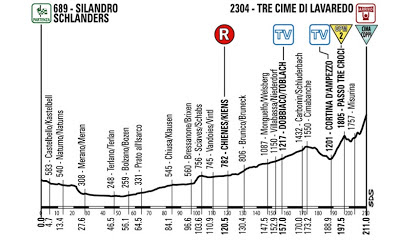 Today's modified stage, now 211 km, will finish on the beautiful Tre Cime di Lavaredo as planned; however, the Passo Costalunga, the Passo di San Pellegrino and the Passo Giau have been removed from the route as they are all closed due to snow. Instead, the route sticks to the lowlands of the Val Venosta, and then rejoins the original route at Cortina d’Ampiezzo, for the Passo Tre Croci and the terrible, gruelling ascent of the Tre Cime di Lavaredo.

Today's 211 km Dolomite stage starts with a long, shallow descent to Bolzano (56.1km). The feed zone is at Chienes/Kiens (km 120.5). Intermediate sprints are at Dobbiaco/Tolbiach and Cortina d’Ampiezzo (km 188.9). There are two categorized climbs on the new, modified stage: the first is the Passo Tre Croci (category 2, km 197.5, 1805 m). The second is the final climb up to Tre Cime di Lavaredo (Cima Coppi, km 211, 2304 m), which starts at Misurina. The mountain sections take place on mountain roads with a normal surface but many switchbacks, some tunnels and descents that are sometimes fast and sometimes technical. Last kms: Very hard climb. 1.5 km with gradients as high as 18%, false flat at Lago di Antorno and fast descent until 4 km from the finish line (at the end of the descent, the riders pass the péage barrier: bottleneck). Final 4 km at around 12%, touching maximum 18% at several points. Finish line after 400 m straight. Road gradient 12.5%, width 6.5 m, surfaced with asphalt. 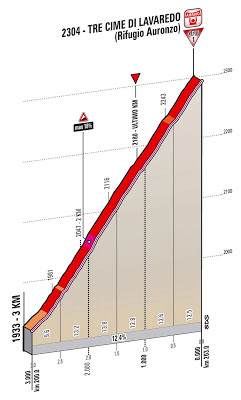 Tre Cime di Lavaredo in the history of the Giro d'Italai: The Giro d’Italia first came here in 1967. It was an unfortunate debut, held in the snow, because undisciplined pushed the riders which caused caused the stage result to be annulled for the purposes of the general classification. The stage result itself – with Gimondi, Merckx and Motta first, second and third – was recorded for merely statistical purposes. The following year, in 1968, the Giro returned to make amends, and Eddy Merckx won the stage wearing the rainbow jersey. It was stage 12, midway through the race, and Merckx swapped his World Champion jersey for the Maglia Rosa, which he wore all the way to Naples, where he took the first of five victories in the Giro d’Italia. In 1974 the Tre Cime saw another historic stage: Merckx, wearing the Maglia Rosa, had already virtually lost it to the young Gianbattista Baronchelli. In the final section, Merckx dug very deep, consuming the very last ounces of energy and crossed the finish line exhausted, in deep oxygen debt, behind Fuente, the stage winner, and a jovial and fresh-faced Baronchelli, in second place. The Belgian saved his race lead by 12” and with secured his fifth and final Giro victory.

Stories for the Italian Cycling Journal about rides, granfondos, touring, having a good time cycling in Italy, Italian cycling history, racing, etc. are always welcome. Contact me at veronaman@gmail.com.
Posted by Angelo senza la o at 4:27 AM