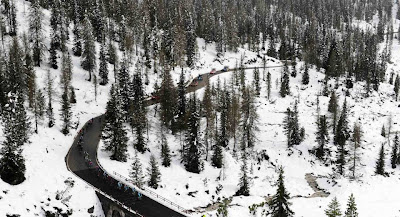 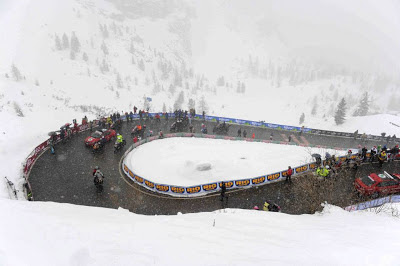 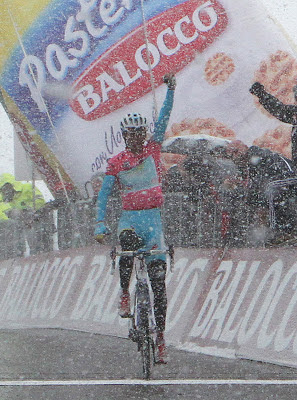 NIBALI, ALONE IN THE SNOW, AT TRE CIME DI LAVAREDO, A WIN WORTHY OF THE GREATS PUTS NIBALI INTO GIRO LEGEND

Vincenzo Nibali (Astana), already the Maglia Rosa, attacked alone on the final climb up to Tre Cime di Lavaredo this afternoon, to win stage 20 of the Giro d’Italia.

Vincenzo Nibali (Astana), stage winner and Maglia Rosa:
The final uphill finish: "I knew that the final kilometers were very hard, but perhaps I didn’t remember quite how hard they were. There were riders ahead of me with a big advantage, but I was pretty calm. In fact, my team-mate Agnoli was probably more nervous than I was. He was impatient to start the chase, but I told him to wait until after the descent because of the cold, which stiffens you up and makes it hard to descend. Even so, I probably attacked too early. The signs saying how far there was to go started 1800 metres from the finish, but it seemed endless."

Rain, snow, cold: "We only really felt the snow today in the final 5 km. Thankfully the road was pretty clean, and the stage turned into a real epic, with an uphill finish in thick snowfall. The manner of my win today leaves me with feelings of immense joy. And when have you ever seen riders finish the Giro d’Italia with no sun tan, and wearing arm and leg warmers? In the cold, you have to limit yourself, with or without climbs. Not to be pretentious, but in this Giro, I’ve had something more than my rivals on the all the uphill finishes. If there had been more climbing, I’d have managed the finishes the way I did today".

A good Grand Tour rider: "Only something truly great could cap my Vuelta win, and this Giro d’Italia victory gives me that extra something. Tomorrow is the final stage, but it’ll end in a sprint, so I’m already very happy. However, I’ll need some time to put it all together and make sense what I’ve achieved. By this time tomorrow, I’ll have won the Vuelta and the Giro, and I also have good placing (3rd in 2012) in the Tour de France to show for myself, so I’ve proved that I’m a good Grand Tour rider. This win in the Giro is special, though." 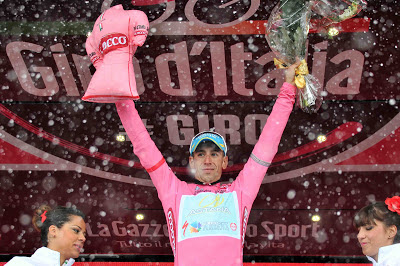 Today's results moved Uran into 2nd and pushed back Evans into 3rd. Scarponi gained time on Evans but not enough to overtake him, for the third time Scarponi will be 4th in the Giro. Betancur took enough time from Majka to take back the white jersey for best young rider. 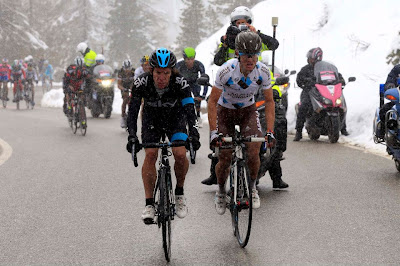 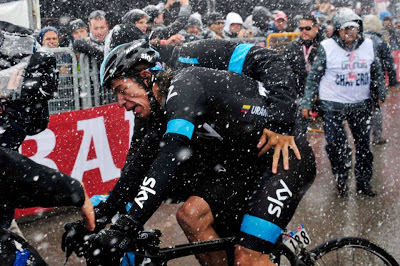 Rigoberto Urán: "With Cadel only 10 seconds in front my goal was to try and jump up to second place and try to go for the stage win in the process. But with the conditions being so difficult and Nibali proving to be so strong on the day it was a hard goal to achieve. When I saw Cadel get into difficulties I dug deep and concentrated my efforts on capturing second place and gave it everything. It is nice to have taken second but the team have done so much great work. Not just today with helping to protect and position me, but also during the whole three weeks. It is me who takes this second place but it is the great work of the team which allowed me to do so and I am very grateful for their support." 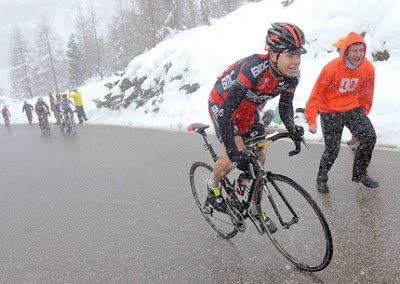 Cadel Evans: "I had a technical problem at two kilometers to go all the way to the finish and that cost me second place," Between kilometers two and one, Evans lost 33 seconds to Uran and stage runner-up Fabio Duarte (Colombia) and an additional 28 seconds in the final kilometer. "He tried to resolve the technical issue, but the severe weather and the nature of the problem prevented him from doing so and it cost him valuable time," BMC Racing Team President/General Manager Jim Ochowicz said. 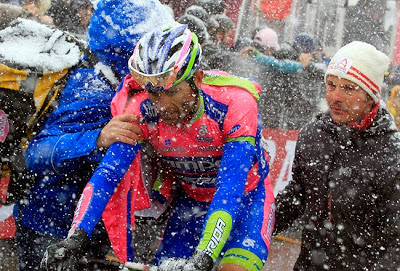 Michele Scarponi: "The final climb, with the snow, was so tough for me. As it happened in Bardonecchia, our approach to the final climb was not so demanding but with bad weather at the finish. I don't like this kind of situation, but today I could respond well and I was able to defend my 4th place. Uran and Evans had no bad moments so it was not possible to obtain a podium spot." 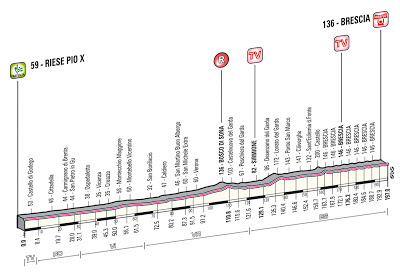 Photo of Scarponi from Team Lampre by Bettini; photo of Evans from Team BMC by Tim De Waele