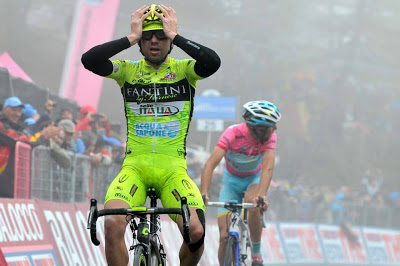 Mauro Santambrogio (Fantini Vini – Selle Italia) won stage 14 of the Giro d’Italia, Cervere – Bardonecchia (182 km), which ended on the steep slopes of the Jafferau climb in fog, rain and snow.

Santambrogio was followed to the finish line by the Maglia Rosa, Vincenzo Nibali (Astana), who finished in the same time and consolidated his overall race lead. The Colombian Carlos Betancur (AG2R – La Mondiale), finished third, 9 seconds after Santambrogio.

Mauro Santambrogio (Fantini Vini – Selle Italia), stage winner:
Goal achieved? "I came here with the main goal of winning a stage. The General Classification was a secondary thing for me. This win is recompense for the hard training and sacrifices I’ve been through since November. But now that I’m lying fourth in the General Classification, I can’t say I’m not thinking about it, although, after all I’ve been through so far during this Giro, I’m going to take it day by day."

You dropped your former captain, Evans: "It gives me great confidence, although I have to thank Cadel because I learned a lot when I rode alongside him. With Cadel I learned how to prepare for a three-week tour. Now, as a captain on a team, I can really make the most of what I have learned."

Riding on a small team: "I’ve had the fortune to ride for big teams like Lampre, and then BMC, when it was Number One in the world, On the other hand, you don’t get many opportunities to show yourself when you ride beside great champions like Evans, Gilbert, Hushovd, and Ballan. At this team, I’ve rediscovered the rider I was in the lower categories. To ride well, I need people close to me who encourage me and make me the center of their focus."


Vincenzo Nibali (Astana), Maglia Rosa:
The patron of the Giro? "I don’t like the word ‘patron.’ Today we saw a number of riders on the attack. Sky tried to attack with Urán. It was a very hard day, with cold and rain, and when the rain finally stopped falling we were hit by a flurry of snow. It was a day for wild animals! This is the one thing that frightens me: the prospect of freezing temperatures in the coming days. Let’s hope they don’t materialise."

Evans or Urán? "Both have shown they are very strong on the climbs. Urán has a team behind him that, taking all things into consideration, could represent the greatest threat."

Scarponi speaking about the frigid weather, "I suffered too much from the cold, I even had to stop to change clothes. The final climb became so difficult for me, it's been a bad day for me."

Tomorrow: the Galibier stage. Weather conditions had put the entire stage risk. The last official announcement, today, said: Following the order by the Valloire Prefecture, and taking note that – after 24 hours, following the assessment of the weather conditions – the Prefecture itself has revised its position, by authorizing the original course of stage 15, the Direction of the Giro d'Italia confirms the original itinerary except for the last 4.25 kms. The finish will therefore be set in Les Granges du Galibier-Monumento Pantani (Pantani Monument). Considering the ever-changing weather conditions, should the weather deteriorate during the night, the Direction of the Giro reserves the right to make further modifications in order to protect the riders’ and caravan’s safety.

The weather forecast for tomorrow: at the summit of Galibier, -7°C to -2°C, light snow. Nibali will look to consolidate his lead further. 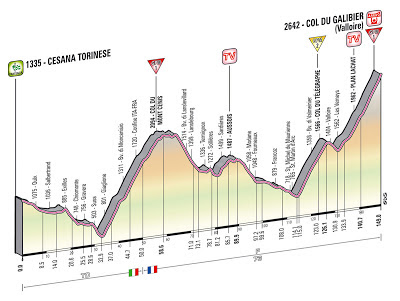