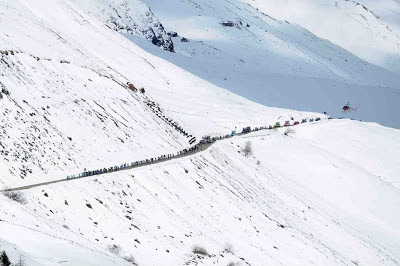 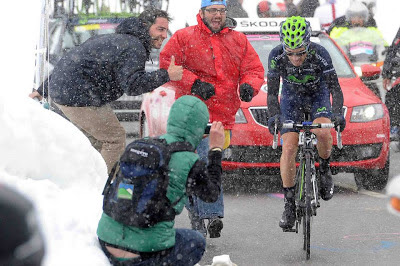 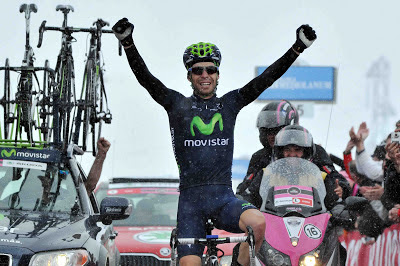 SOLO, IN THE SNOW, ON THE GALIBIER: CLASSIC WIN FOR VISCONTI, NIBALI RESPONDS TO ALL ATTACKS AND DEFENDS MAGLIA ROSA

Giovanni Visconti (Movistar) took a memorable victory today, crossing the finish line alone on the Col du Galibier, as snow fell on the Giro d’Italia's first visit to Galibier. Visconti had joined a small group of riders who broke away from the peloton 55 kilometers into the stage, Then, just before the Col du Télégraph GPM, 21 kms from the finish line, went clear on his own.

Vincenzo Nibali (Astana) finished the stage 54 seconds after Visconti, in the same time as his rivals Evans, Urán, Santambrogio and Scarponi.

The Stage winner and the Maglia Rosa spoke to the press after the stage.

Giovanni Visconti (Movistar), stage winner:
A Sicilian in the cold: "With the years I’ve come to realize that I don’t ride well in the cold. I get most of my results in May and June, in the heat. But you don’t notice the cold and the rain when you’re leading the race. It’s worse when you’re in the peloton. Today, the sun was shining on me, it was a mythical stage, and I’m happy I made it all the way today."

A win foretold? "To a degree, I planned today’s move. All during the Giro I had been hoping to get into the breakaway on one of the really mythical stages. I told my father and friends that I hoped to get into a fugaccia (a special break) in a tappaccia (a special stage). I’ve never before felt what Vincenzo [Nibali] feels, riding these stages at the front. Today I felt it."

Pantani Stage: "In the final kms, you saw me crying, but for the last 3 kms I was crying inside. I knew I could win the stage. I thought of the coincidence of finishing near Marco’s memorial. We share the same birthday. I thought of him and asked him for the strength to finish. Someone said to me today, a circle is closed. A year ago I quit the race on Stage 15, today I won Stage 15. I hope that from now a new career starts for me."

Vincenzo Nibali (Astana), Maglia Rosa:
No racing on Mont Cenis: "A lot of riders didn’t have the legs to try to get away today. The group split at the bottom of the climb, with 80 riders sitting up. We’ve all been through a very hard week, not so much because of the climbs but because of the rain. People were afraid of the cold and the rain, so everyone was hesitant."

Attacking in the Maglia Rosa: "Trying to attack and do something beautiful is part of my nature. I’m wearing the Maglia Rosa and I wanted to build a good advantage over my direct rivals. Today it was too difficult to gain any time. The Galibier is very long and the gradient increased towards the end. I tried, but it was too difficult, so I stayed in the group, marking my rivals."

The Best Nibali ever? "I think I have the same form as I had last year at the Tour, but the Tour is different from the Giro. At the Tour there were fewer possibilities. The finishes were the bottom of hills, there were two time trials totalling 110km. Here the race suits my style." 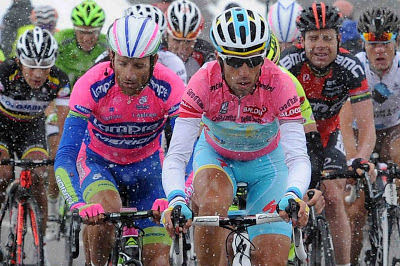 Cadel Evans( BMC Racing Team) kept his hold on second place. Evans made his own attack at 700 meters to go on the way to finishing eighth on the stage, crossing the line in the same time as Nibali and nearly all of the top contenders to remain 1:26 off the lead with six stages to go. "In the conditions, it wasn't exactly favorable for those kind of attacks," Evans said. "I didn't have a bad day but at least I am back at my level. No time lost but no time gained either." Evans said some challenges of the race have come from an uncontrollable factor: the weather. "As a rider, just to stay healthy is really difficult with the changing weather conditions," he said. "The weather changes quicker than we can change our clothes. The third week of the race comes after a first week that was even harder than expected and a second week that was harder than expected because of the weather."

Michele Scarponi (Lampre-Merida) said, "It has been a better day than yesterday. In the Maglia Rosa group bunch there wasn't much energy to attack."