Bianchi, the world's oldest bicycle manufacturing company still in existence, will be celebrating it's 125th anniversary this year. They recently signed a new contract with the Italy-based communication and marketing agency Vitesse. Lets hope that is an indication that special anniversary products will be coming our way this year.

The history of Bianchi:

1885-1900
It was in the year 1885 when Edoardo Bianchi, then 21 years old, started his enterprise as a bicycle manufacturer in his little shop in Milan, at via Nirone. The deep innovative zeal distinguished him above all the constructors of his era. 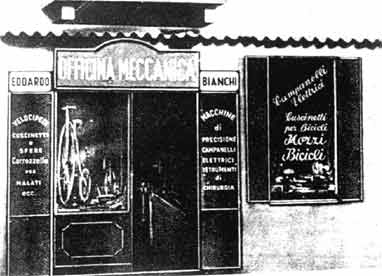 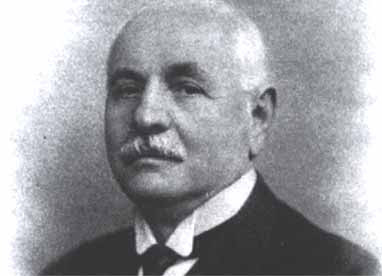 His first idea, conceived 125 years ago, was to reduce the diameter of the front wheel and balance the gap of the motion with the application of a chain, which had just been invented by the Frenchman Vincent, and then to lower down the height of the pedals. And so “Safety” was born: a safety cycle and the very first modern bicycle.

One of the main advantages of this new means of transport was stability: no acrobatics were need to keep balance. Then Edoardo designed a similar vehicle, whose wheel diameter was further reduced and which had both front and rear wheels almost of the same size. Italy found out the manufacturer that would have marked the Italian production all through the century.

The “little blacksmith”, as he was called, moved his workshop from via Nirone to via Bertani to enlarge it. In this new working place, he produced, in 1888, the first bicycle with tyres, a recent invention by the Scottish veterinary Dunlop.

In 1895, Edoardo Bianchi was invited to Court, at Villa Reale in Monza: Queen Margaret had heard about his original bicycle and was eager to learn how to ride it. Then Bianchi created, especially for the Queen, the first lady’s bike. Since the very beginning of his activity, Edoardo Bianchi had been very keen-witted about innovations and watchful about the sports sector. Bicycle competitions were just the perfect chance for the young manufacturer to test his new technical solutions before taking them to production.

Bianchi’s first international sport success dates back to 1899, when Tomaselli won the Grand Prix de la Ville de Paris. This is how Bianchi’s adventure started: sports competitions fuelled the growth of an enterprise which was born just four years before as a workshop, but was going to become one of the most important industries in the world.

1900-1920
In 1901, Edoardo Bianchi presented the first bicycle ever featuring a cardan joint transmission.

In 1913 he invented the front brake system;

In 1914 Bianchi was a famous and reputed manufacturer: in just one year, production settled on extraordinary figures: 45.000 bicycles, 1.500 motorbikes and 1.000 cars.

Industrial successes, anyway, didn’t stop him from research and innovations.

In 1915, Bianchi produced a bike for the Army, equipped with wide-section tyres, folding frame and suspensions on both wheels. This original bicycle was consigned to the Royal Light Infantry Corp, the “Bersaglieri”, who used it as an off-road vehicle from the Alps to the African deserts: it was the first mountain bike, the ancestor of all the modern versions. 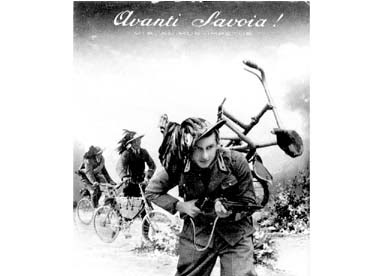 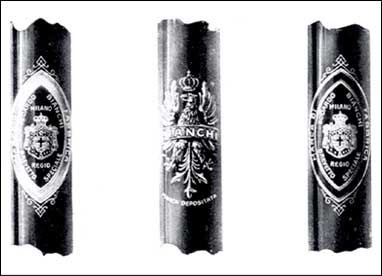 1920-1935
Bianchi’s successes in the sport went along with those achieved at industrial level and the ‘celeste’ bicycles kept winning all around the world. 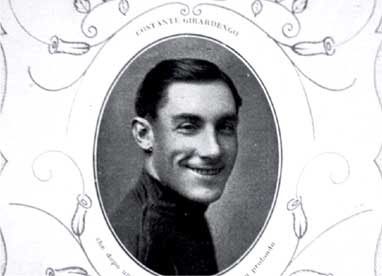 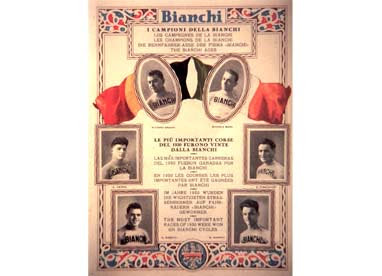 In 1935, with 50 years of history and experience, Bianchi was a huge company, the absolute leader of the Italian market, producing over 70.000 bicycles a year.
Sales success however didn’t divert Bianchi’s attention from competitions: in fact, sports undertakings got a new drive from Fausto Coppi’s deeds. 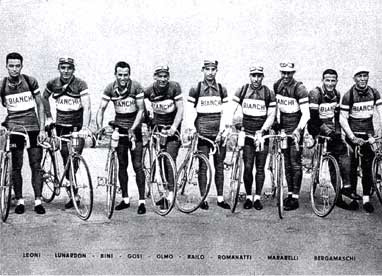 Fausto Coppi’s adventure with Bianchi started in 1940, with his first victory at the Giro d’Italia. His second big deed occurred in 1942, when he got the world hour record title In 1947, Coppi became World Champion in the pursuit race and also gained his second Giro d’Italia. 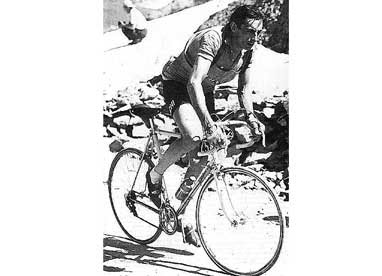 Coppi won his first Tour de France in 1949, when everybody guessed he was already out of the game, after the crash during the Saint Malò stage that loaded him with a huge delay. Instead, he managed to gain one hour over the little Frenchman Marinelli, who was wearing the yellow jersey of the race leader, and to catch up with Bartali, who finished second with a delay of 11’. He was the first rider ever to get the Giro and the Tour in the same year, an impossible deed in the physiologists’ opinion. Always in 1949, he gained the World Champion title in the pursuit race for the second time.

In 1952, the Tour organizers tried to enliven the Grand Boucle race by introducing some special prizes. And again, Coppi took the win of the Tour and the Giro in the same season. 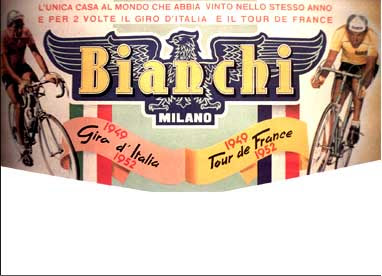 In 1953, he won the on-road World Championship and his 5th Giro: these 5 successes, unique and incomparable for manner and style, inspired popular tales, as well as the literary and movie worlds. 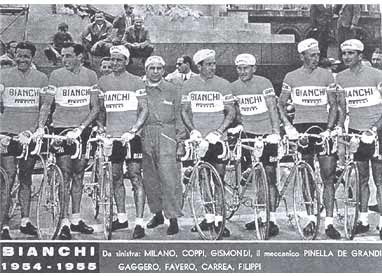 Fausto Coppi didn’t want to win a lot; he rather wanted to win “in a good way”.
He was one of the few riders, in all the cycling history, who succeeded in achieving his aim. 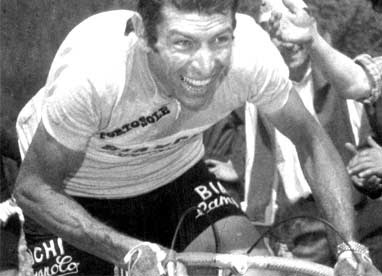 Two more will follow in 1986 with Moreno Argentin and in 1992 with Gianni Bugno.
In 1980, the Bianchi trademark was taken over by Piaggio Group.

In 1982, Bianchi launched on the European market the “BMX”: special bikes designed mainly for youngsters to perform off-road acrobatic feats and thus set a trend.

1984 was the year of the “Mountain bike”, the off-road bicycle designed in cooperation with Bianchi USA. 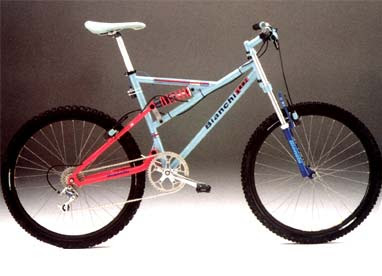 In 1987, Bianchi took over the Austrian trademark “Puch”.

The year 1990 brought a further innovative idea leading to a completely new generation of bicycles, the prototype of the modern city bike. Bianchi’s new creation was called “Bianchi Spillo”, and in a short time it became a reference for the whole bicycle industry; even nowadays, all the manufacturers have a range based on this bicycle model.

Though without losing sight of the on-road competitions, Bianchi focused on mountain bike challenges.

In 1993 another Bianchi biker, Dario Acquaroli, got the MTB World Championship in the cross country specialty.

In 1995, Bianchi re-engineered in-depth its city bike models through the “City Project” aimed to equip them, for the first time ever, with avant-garde frames, built according to the most updated ergonomic parameters.

1995-2005
1998: The year of the triumph. Marco Pantani leaves everybody behind both at Giro d’Italia and Tour de France: a double win conquered just by few, to prove himself and the others he’s not only the man of one-day-win and meaningless mountain escapes. The best Pirate, the portrait of sheer joy: the man everybody wants and continues to remember.

The year of Stefano Garzelli, Pirate’s trusty friend and faithful team-mate, who at Tour of Switzerland inaugurated successfully his career.

The year of Marco Velo and his win at the Italian Time Trial Championships as well as of the numerous wins of the Martini Racing team in the MTB cross country and downhill.

1999: As life and destiny play with the Pirate’s dreams, shattering his hopes while running up towards the utter glory, Marco Velo keeps at his side with dedication, while confirming his skills of chrono-man. For Bianchi Mercatone Uno, a strong and close-knit team, this is the confirmation of a talent. 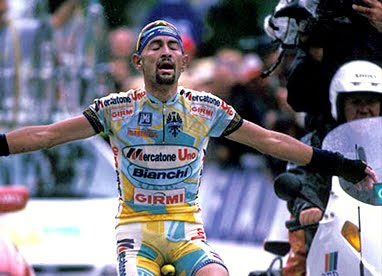 Dario Aquaroli and Nadia De Negri, together with the new French star, Gregory Vollet, establish the fame of the MTB Martini Racing Team in the offroad.

2000: While Garzelli gets the win in the “Jubilee Tour” flanked by Pantani, and Velo hits for the umpteenth time the title of Italian champion against the clock, the century ends with the golden shines of the mountain bikes.

To resume the results of the Bianchi-Motorex team, it takes to recall the great deeds of the past champions: José Hermida “el Torito” pulls together the World Championship, the World Cup and the European Championship, Vollet gains the French Championship, Acquaroli seals off the contenders and triumphs at the cross country National championship.

2001: New win for Marco Velo in the tricolour time trial race, but it is the Mtb team which stands out as the leading formation worldwide.

In Italy, junior riders are no less: Nicoletta Bresciani captures another tricolour title whereas Quadroni and Lanteri stand out at the National Championship.

2002: The Bianchi-Coast union bestows strong emotions: the team captained by Swiss Alex Zulle collects 21 wins. The Helvetian champion is the greatest protagonist of the team pocketing 7 wins inclusive the “Tour of Switzerland”.

Another brilliant season breaks out in the off-road for the Motorex-Bianchi team, chaired by Felice Gimondi and directed by the new manager Massimo Ghirotto.

2003: After 19 years Bianchi is back as first sponsor of a professional outfit: Jan Ullrich leads the Bianchi team and at the Centenary Tour de France he stirs the crowd of fans by challenging Lance Armstrong, defeating him in the time trial race and getting the honour placement in the overall ranking. 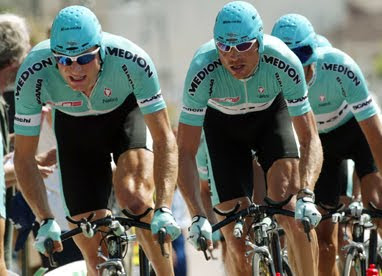 2004: The year of celebrations. The event of 120 years of pure “passione celeste” coincides with a brilliant season loaded with emotions.

Even in the road race, Bianchi confirms its leadership by capturing, with the Swede Magnus Backstedt, colour-bearer of the Alessio-Bianchi team, the most enthralling and prestigious race among the Northern Classical competitions: the legendary Paris-Roubaix, followed by the on-road tricolour success of Cristian Moreni at the Italian Championship. Moreni is then summoned to take part with the national team in the Olympic Games in Athens (where he will give his precious contribution to the Olympic win of Paolo Bettini) and in the World Championship in Verona.

Bianchi is protagonist also on-track with the champion from Bergamo Vera Carrara, who at the World Championship in Melbourne (Australia) ranks second in the World Point Race Competition.

Bianchi's collection of medals got rich by two more golden medals, those won by Cristian Cominelli of Bianchi-Agos Junior team at the Pupils Cycle-Cross Italian Championship and at the MTB Cross Country Italian Championship, as well as by two bronze medals conquered in the Male and Female Junior Cross Country MTB tricolour competitions, respectively by Daniele Radici from Brescia and Nicoletta Bresciani from Bergamo.

Since May 1997 F.I.V. Edoardo Bianchi is part of Cycleurope A.B. group, the Swedish company of the Grimaldi group, known as the worldwide most important holding in the cycling sector.

The brands of the Bianchi group (Bianchi, Legnano, Puch and Chiorda) have met those of Cycleurope (Monark, Crescent, DBS, Kildemoes, Everton, Micmo, Gitane) to constitute a unique network in the two-wheel market.

Today Cycleurope can implement the most advanced operative synergies involving prestigious European companies, amongst which Bianchi represents the flagship brand.
The strategic investments of the group aim at two outstanding targets: the development of a highly-advanced product and the establishment of Bianchi brand on international markets.

Bianchi history from 1885 to 2005, and photographs, are from www.bianchi.com; photos in addition to those shown here can be found there.

Stories for the Italian Cycling Journal welcome; contact me at veronaman@gmail.com. There are more than 1,100 stories in this blog. The search feature to the right works best for finding subjects in the blog and there is also a translate button at the bottom so that you can translate each page.

Email ThisBlogThis!Share to TwitterShare to FacebookShare to Pinterest
Labels: Bianchi