Climbing the "Jump of the Goat" (Salto della Capra) 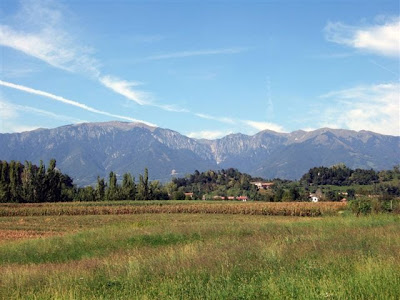 My thanks to William Speckman, owner of Your Cycling Italia, in which he describes his favorite ride up the “Salto della Capra” (the "Jump of the Goat"). Bill, and his wife Anna, run a bike camp near Monte Grappa based from a single hotel. Each day they lead guided bike rides for passionate cyclists—from dedicated enthusiasts to hardcore racers, all of whom enjoy some Italian dolce vita after riding. The single base concept allows YCI to offer daily, all-inclusive, rate pricing. For more information visit http://www.yourcyclingitalia.com/. Now, onto William's ride story:

"What makes a great ride? The scenery…the challenge… the history? We all ride for different reasons and the above traits ring true for me when I make my assault up the Salto della Capra of Monte Grappa in the Veneto region of northern Italy.

When arriving in Venice you wonder where all this great climbing is since you spend over an hour in the car on the flat Veneto plains. Then you start to see in the distance the outlines of Monte Grappa. This is the first mountain range you encounter, the pre-Dolomites of the Dolomite Mountains. Historic Monte Grappa sits at 1775m/5769ft high and has five climbs to the summit, two from the north side, two from the south side and one way up from Monte Tomb on the east side which includes the Salto della Capre climb.

The brunt of this 22km climb which starts off with the “Salto della Capra” (the jump of the goat) will pose a big challenge, do to the steepness of these 8 kilometers of narrow road! This section of road will take over an hour to conquer! The climb starts at “Quattro Strade” the (four streets) which is the intersection of four roads in Pederno del Grappa. This ride starts off easy at about a 5% grade for 1km. When you reach the roundabout at the center of Fietta, you take the 2nd right turn and you start to get a taste of Grappa at 10-16% grade right off the get go! This is just a warm up to what lays ahead, which lasts for 2.6kms. When you reach the local bar, named “Il Gallo” the (rooster tavern) you bear right onto a narrow road. This road winds through the forest of trees and the start of agony for the next 8kms of 28 switch backs to the top for this climb. For the next 4.6kms the grade is difficult 8-12% as you eat up the long stretches of road cut into the rocky mountain ledge between switch backs. Then on a left hand switch back you see a metal retaining wall that holds the jagged rocks back, at this point, watch out! It’s you against the mountain and on the way up you would be lucky if you meet a vehicle on the road, never mind another cyclist! Something funny happened on this mountain while I was climbing. I could hear in the distance behind me an approaching pedal moped. It turned out to be a girl who over took me on this 8% grade. About a kilometer up the road I rounded a tight right hand turn and to my amazement, there she was, the girl that had passed me earlier pushing her running moped up this 16% grade since the moped could not continue anymore with her aboard. This is a first I’ve seen, a moped that couldn’t make it up the road on its own power because of the grade of the climb. The road gets even narrower and the steepness goes up to 16-18% then 22-26%. I’ve even seen a flash of 30% on the GPS… this really pitches up to the sky! All of a sudden the switch backs get shorter and shorter as the road gets steeper and steeper and what’s that like you ask? Well, it’s like doing track stands up hill! Do to my size of six foot three and nearly two hundred pounds I almost always climb in the saddle turning at 38 rpm with 39/29 gearing. It’s so steep it is hard to keep the front wheel on the ground on every pedal stroke. It’s also the only time I nearly fell down going uphill! I did a sharp switch back turn and the front tire skipped sideways about six inches while trying to keep the front wheel from sliding out from under me! I’ve even busted a chain on this section of climb…no sense repairing it since all I had to do is coast down the mountain to where I was staying, one hour away! Now you are 5.7kms into the climb and the pitch comes down a bit around 12-13% enough to get a little bit of a spin back into your legs. You start to breathe a little easier before the final, last kilometer push of a relentless 16 -17% of punishment as the switchbacks again get shorter and steeper as you near the top of this pass. You have reached the half way point of this climb to the top of the 22km Monte Grappa journey and the toughest part of this climb is behind you.

Now you have a chance to catch your breath, take in some water, refuel the body, and assess how you feel to continue for another 11kms. You start a decent for the next 2.3 kms which includes a 16% section of road which is mostly narrow, winding, and just wide enough for one car to pass. The end of the decent around 14.3kms is marked by some watering holes on the left. Then the narrow, winding road starts its uphill rise again at about 6-10%. You pass through three rustic tunnels dug into the cliff walls that give way to dramatic views of the valley floor below. You continue like a ribbon winding along the edge of the mountain until the road bisects the “Campo Croce” road which comes up from Semonzo on the south side of Monte Grappa at 19kms. Just 3kms from the top, you take the right turn for another 1.8kms at 10% grade to the final right hand turn. It is here the last stretch of 1.2kms around 6% grade you see in the distance the WWI monument that houses the fallen from the war and just below a restaurant and bar which is an inviting sight knowing you have reached the top or “Cima” Grappa.

Once you stop and have a chance to rest you notice the great granite monument and WWI museum and the panoramic views. This mountain top is usually thriving with people from hikers, to bikers, people in cars and buses, all enjoying the beauty and history all around. To the south you see the city of Venice some 90kms away in the waters of the Adriatic Sea and to the north the spectacular sights of the jagged peaks of the Dolomite Mountains. You are surrounded by fields and pastures on the mountain that are dotted by the many “Malgas” or (mountain farms) that are the homes to the animals which are brought up from the farms below during the summer months for production of their own milk and cheese. This setting couldn’t be more historic in Italian WWI history and according to war veterans and alike the Italians held off the advances of the Austrian/ Hungarians into northern Italy on the battle lines along Monte Grappa and the Piave river. Some 12,615 Italian soldiers gave their lives to stop advancements of the Austrians to help make Italy as we know it today.

The best part of this ride is taking in what the mountain had to offer in a few hours. From the challenge of ascending one of the toughest climbs in our area, the Salto della Capra, to passing by the many malgas as you wind through the pastures on the way up the mountain, to arriving on top of the world on historic battle grounds for some breath taking views seen all around."

Photo: Monte Grappa... and to the right is the Salto della Capra...in the middle the tunnels and on the left the climb to Cima Grappa.

Stories for the Italian Cycling Journal about rides, granfondo, having a good time cycling in Italy, Italian cycling history, etc. are very welcome. Contact me at veronaman@gmail.com. There are more than 1,300 stories in this blog. The search feature to the right works best for finding subjects in the blog and there is also a translate button at the bottom so you can translate each page.
Posted by Angelo senza la o at 6:48 AM