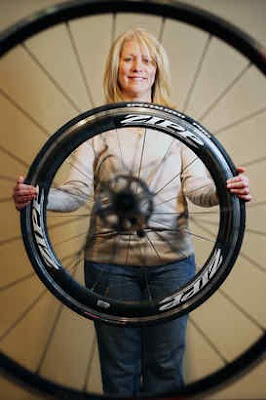 Her tale starts in 1984, when, as a 29-year-old former office manager from Northeast Philadelphia, Morton took a seemingly quixotic journey to Europe as the owner and director of America's first professional cycling team.

This was long before Lance Armstrong, and in an era when the chief role of women in cycling was to serve as attractive bookends on the awards podium.

An Italian newspaper reporter was taken by the novelty and struck up a friendship while writing about Morton as her team raced the Giro d'Italia, the world's most important professional bike race beyond the Tour de France.

Twenty-five years passed. The reporter, Angelo Zomegnan, was now the director of the Giro, and interested in shattering another barrier by bringing the start of his race to the District of Columbia.

Whom did he call for help? Morton, now a partner in G-4, a Doylestown firm that runs big-league sports-oriented events, such as professional bike races and charity fund-raising rides.

That call has thrust Morton and G-4 into the middle of a historic effort for U.S. cycling, as well as provided wonderful opportunity for a still-growing business.

At this point, the 2012 Giro is set to start in Washington with two days of racing before the three-week event returns to Italy. It would be the first time any European grand tour - the biggest events in professional cycling - started outside Europe.

"This would be huge," said John Eustice, a Bucks County native who was the first U.S. professional champion and a member of the team Morton took to the 1984 Giro d'Italia.

All that remains to be done is arrange for sponsorship money to pay for the event, said Mark Sommers, a Washington lawyer who is chairman of the Giro effort. He placed the amount needed in the millions.

Morton and her partners at G-4, Alice Armstrong and Kristen Reiss, are in the thick of the planning as well as the fund-raising.

Sommers said he could not think of a better partner.

"Robin Morton, sliced bread is what she is," said Sommers, who, at 53, is an elite-level cyclist himself. "Robin brings a wealth of experience in running major cycling events. She and G-4 are dedicated, high-quality, uncompromising, and among the most pleasant individuals you will ever work with."

Eustice, who runs his own event company, Sparta Cycling, said Morton had a "sterling reputation" in professional cycling.

"She has developed a terrific organization," he said. "She is very good at maintaining relationships. She is a very hard and precise worker, very professional at everything she does."

Morton, 55, came to the cycling by way of her husband, Glenn Morton, a bike racer. Through him, she caught the bug, met Eustice, and conspired to create a professional team to race in Europe.

"It was such an incredible journey that I guess I never knew I was not supposed to be doing it."

Morton stayed with the sport, honing her skills by working 15 years for Threshold Sports L.L.C., which organized, among other events, the annual Philadelphia professional cycling race.

In 2005, Morton and her partners struck out on their own and have since organized a variety of bike races and charity rides. The work includes publicity and the logistics of running the events. Her company has five full-time employees, but she hires scores more temporarily for each event.

She met Sommers when her firm handled the logistics for a 2008 professional race in Washington. A photograph of that race, with the U.S. Capitol as a backdrop, was posted on G-4's Web site. That's what caught Zomegnan's attention and prompted his call.

"Angelo is a visionary and really wants to help globalize the sport," Morton said, explaining his interest in bring the Giro to the United States.

Zomegnan, Morton, and Sommers all were part of a reception two weeks ago in Washington to introduce the race to the media.

"The prospects of it, our great chances, are exhilarating," Washington Mayor Adrian M. Fenty told the Washington Post that night. "It is going to be a fantastic event . . . akin to bringing the Olympics to the city."

Morton is unfazed by the scope.

"Yes, the buildup for the race will be bigger, the hospitality will be grander, the caliber of rider is bigger," she said. "But the actual work is no different that what I did in Philly. It is still just a circuit race within an urban setting."

Stories for the Italian Cycling Journal about rides, granfondo, having a good time cycling in Italy, Italian cycling history, etc. are very welcome. Contact me at veronaman@gmail.com. There are more than 1,200 stories in this blog. The search feature to the right works best for finding subjects in the blog and there is also a translate button at the bottom so you can translate each page.
Posted by Angelo senza la o at 6:29 PM