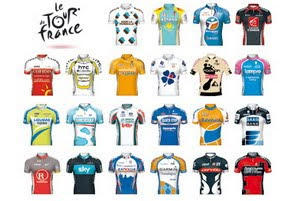 ASO, the organizers of the Tour de France, that will take place from the 3 to 25 July, 2010, have just announced the 22 teams selected that will start the race in Rotterdam on Saturday, July 3rd.

Beginning in 2011, in compliance with the agreement passed between the organizers of the three main Tours and the International Cycling Union (UCI), the first 17 teams of the world ranking established at the end of 2010, according to the sporting results of the teams, will be automatically selected. The other teams will receive wild cards from the organizers.

Photo: jerseys of the teams competing

Stories for the Italian Cycling Journal about rides, granfondo, having a good time cycling in Italy, Italian cycling history, etc. are very welcome. Contact me at veronaman@gmail.com. There are more than 1,300 stories in this blog. The search feature to the right works best for finding subjects in the blog and there is also a translate button at the bottom so you can translate each page.
Posted by Angelo senza la o at 6:41 AM