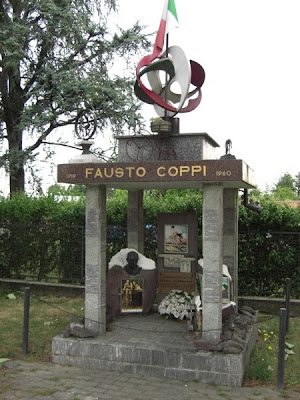 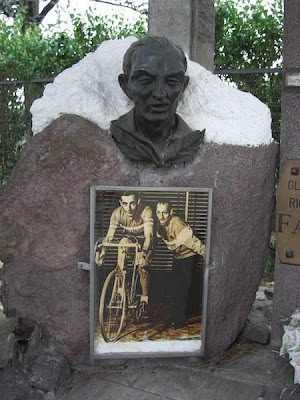 "A cycling friend of mine told me that when he rode the granfondo version of Milano - San Remo, he stayed in a hotel in a small town in the outskirts of Milano, called Pieve Emanuele. Doing some sightseeing, he saw a monument dedicated to Fausto Coppi. His trip was a long time ago and he didn't remember many details, so last summer I decided to do some exploring there myself. Well, it appeared to be an easy job. Coming from the autostrada and parking the car when entering the town, just before the roundabout where the Via Roma meets the Via Luigi Gemelli, I quickly discovered the Giardino Fausto Coppi, on the opposite side of the road. In the garden a construction that looks like a tabernacle could be seen with all kind of relics that refer to the career of the great campionissimo.

There are multiple paintings and drawings, each of them referring to known historical highlights: Coppi looking at his name written in the snow during the climb of the Stelvio in the Giro of 1953, Coppi and Bartali handing over a bottle, and many others. Another picture of the two former rivals is fixed onto a concrete socle with a bronze bust. A copper plate indicates that the monument had been inaugurated on April 28, 1990.

Unfortunately, it fell victim to criminals trying to steal the bronze head of Coppi in 1997. But the monument has been reconstructed to its original state and people visiting it will probably be unaware of the damage that was done. Just outside the garden, there is also a column with a Madonna, patroness of the cyclists, and a prayer."

Stories for the Italian Cycling Journal about rides, granfondo, having a good time cycling in Italy, Italian cycling history, etc. are very welcome. Contact me at veronaman@gmail.com. There are more than 1,300 stories in this blog. The search feature to the right works best for finding subjects in the blog and there is also a translate button at the bottom so you can translate each page.
Posted by Angelo senza la o at 5:38 AM