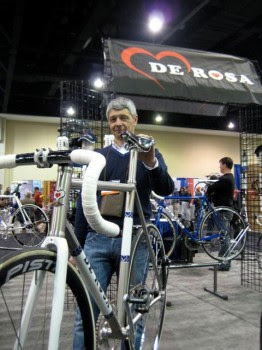 The following article, written by Matt Butterman, appeared on the North America Handmade Bicycle Show website during the show:

Pleasing a master and perfectionist is never easy, if your father is the famed bicycle builder Ugo DeRosa, it’s a downright terrifying prospect.

Doriano DeRosa started building frames in 1975 as a teenager under his father’s severe gaze. Thirty-five years later, he’s the craftsman in charge.

In the opening seminar of this year’s NAHBS, Doriano explained how the family model of demand and nurture employed by his father in his own upbringing is applied to his craft as DeRosa’s head titanium and steel framebuilder.

Attention to detail and a critical eye produce a superior product. “Doriano is completely involved with the whole process of producing a custom steel or titanium frame, from start to finish,” explains Trey Henderson of Trialtir USA, DeRosa’s American importer. “From measuring the customer to testing the strength of the frame, he’s totally committed to the process of building a masterpiece.”

DeRosa explained the eight steps on the path to building a frameset that bears his family’s name. First, the customer is meticulously measured. Second, these careful measurements are converted into customer-specific tube lengths and frame geometry with the aid of CAD software in a process he calls “projection”.

The next two steps are the most critical, especially for a titanium specialist like Doriano DeRosa. The raw tubes are “mitered”, or cut angularly, with the help of precision machines. Next, the tubes are fitted together on alignment tables in the “positioning” step. This is a crucial and exacting step for the lugless Ti and steel frames in which DeRosa specializes, because there is no room for error to produce a solid, strong tube joint.

Next, the tubes are cleaned and welded in a pristine environment – again an especially important step to get right for a titanium specialist like DeRosa, and one at which many less experienced builders stumble.

Finally, the frame’s alignment is checked, and its durability and quality are tested in a rigorous process that again employs a combination of cutting edge technology and the immeasurable intuition of a craftsman.

“For me, weight is not as important as durability and strength” says DeRosa. That those two latter ideals are emphasized is shown by the results of DeRosa’s in-house stress test. A DeRosa frame constructed from 6/4 blend titanium tubing has been shown to be theoretically capable of withstanding 200kg (440 lb.) dynamic force cycles repeatedly and constantly for 400,000 years before fatigue will cause breakage!

Much as keeping the business a family affair is important for DeRosa and his two brothers, having a strong relationship with titanium tubing supplier Reynolds is strongly valued and has been cultivated over 10-12 years of working together. DeRosa built his first Ti frame in 1993, and in 2002 made the switch to 6/4 alloy titanium – stronger and stiffer than its more popularly used 3/2.5 alloy brother – all sourced by Reynolds.

“The testing I do gives me important data on optimum tube thickness and shape parameters”, says DeRosa. “Reynolds is a great partner and takes pains to develop and give me exactly what I need to produce a strong, durable and elegant frame.”

So there you have it: invest some (serious) cash in high-tech frame design tools and follow the eight-step process and you’ll have your own version of a DeRosa, right? Not so fast, Doriano cautions.

“Being a framebuilder is not just about making the frame. It’s about putting your philosophy behind the design. It’s about developing and making your own tools if the right ones don’t exist. It’s about being open to new technology. It’s about…” DeRosa’s hands grasped at an imaginary frameset in the air as he struggled for words in his highly self-underestimated English.

It’s about heart and soul. You’re born with it; it’s not earned. So if you want to build a DeRosa, you’d better be a DeRosa.

Photo: Doriano at the show

See this story for a series of photos showing Doriano building a Ti frame set.

Stories for the Italian Cycling Journal about rides, granfondo, having a good time cycling in Italy, Italian cycling history, etc. are very welcome. Contact me at veronaman@gmail.com. There are more than 1,300 stories in this blog. The search feature to the right works best for finding subjects in the blog and there is also a translate button at the bottom so you can translate each page.
Posted by Angelo senza la o at 5:47 AM