Tirreno-Adriatico Over, Next Milan-Sanremo (and Lance!) 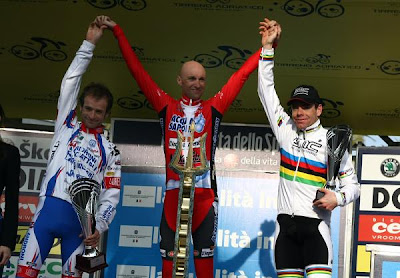 The seven stage Tirreno-Adriatico was a very good race with a particularly exciting final stage in which the race was won in dramatic fashion.

At the start of stage seven, race leader Michele Scarponi (Androni Giocattoli) had a two second lead over second placed Stefano Garzelli (Acqua & Sapone). The stage had two intermediate sprints for time bonuses and in each Garzelli was able to win one second. That left Scarponi and Garzelli tied on time. However, Garzelli became the virtual race leader based upon previous stage placings. Scarponi was unable to take any bonus points at the finish leaving Garzelli as the race winner.

Stories for the Italian Cycling Journal about rides, granfondo, having a good time cycling in Italy, Italian cycling history, etc. are very welcome. Contact me at veronaman@gmail.com. There are more than 1,300 stories in this blog. The search feature to the right works best for finding subjects in the blog and there is also a translate button at the bottom so you can translate each page.
Posted by Angelo senza la o at 6:28 PM