Milano-San Remo Down Through The Years 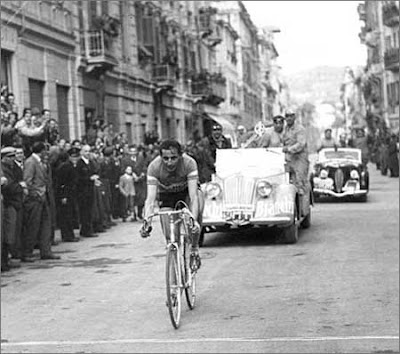 This article is written and contributed by Mark Mahan.

Milano- San Remo Down Through The Years

La Classicissima or La Primavera, Milano-San Remo is the first big appointment on the year’s racing calendar and tomorrow’s race promises as always to be electrifying. Being the lottery that is however, the prognosticators have been plying us for days now with the eternal question; will it come down to a sprint or will a break get away on one of the famous “Capi” or sharp little climbs that dot the final 40 kilometres?

Tomorrow’s edition is the 101st and the sprint versus the breakaway has been a theme at Milano San Remo from the very beginning. It wasn’t until the 4th running of the race in 1910 that a significant gap was recorded between first and second place, a full 61 minutes. Eugene Christophe won one of the more dramatic editions due to horrendous weather, his winning time was 12 hrs. 24’minutes. In 1917 Tano Belloni, the first racer to be called “The Eternal Second” won, beating the first “Campionissimo” Costante Giradengo. Belloni attacked alone in the town of Ovada, 166 km. from the finish, again in awful weather conditions. Giradengo arrived 11’48” later, a half an hour in front of the third place rider. The very next year, 1918, the roles were reversed, this time it was Giradengo who attacked from even further out. Wouldn’t you know it, in atrocious weather, that made the dirt roads muddy paths. Belloni chased alone, arriving 13’14” behind “Il Gira” with third place coming in at 59’ minutes. Only seven riders finished the race, the last place came in at 10:00 PM, four hours later.

The Milano -San Remo of 1946 was much more than just a bike race. It was virtually synonymous with the re-birth of Italy after the end of the WWII, the expectations and agonistic tension were off the charts. Professional racing had more or less ceased after Fausto Coppi set the new hour record at Milano’s Vigorelli velodrome just before heading off to war in 1940. That was the same year he won the Giro d’Italia in his first time out, as Gino Bartali’s “gregario” or domestique. After the war ended Coppi paid a visit to the Legnano team in an attempt to get his job back, the door was closed though, the team deciding to opt for Bartali who was an established champion. The Bianchi team chose to gamble on the younger racer, giving him a handsome contract, the contents of which somehow made it back to the ears of Bartali who demanded the same treatment from his team, Legnano. They turned a deaf ear to Gino’s pleas. And that brings us to the start of the 1946 Milano- San Remo.

Coppi knew he had to make a bigger than life impression. He also knew that he wouldn’t be on equal footing with Bartali if it came down to a sprint finish. With that in mind he trained like an obsessed monk the entire winter, accumulating over 7000 kilometres before lining up at the starting line in Milano. Over 2000 of those kilometres were ridden on a fixed gear bike, something that was unheard of at the time. He had told his brother Serse, also on the Bianchi team, that his job was to cover Bartali and make sure that he didn’t chase him down. Little did Serse know that Fausto was going to attack almost from the gun, going off with a group of no names at the town of Binasco, just 10 km. into the race. But they were riding for glory and behind them all eyes were on Bartali who was seemingly disinterested in Coppi’s attack. Which takes us back to the contract dispute, Gino was riding the race so as not to infringe on his contractual obligations to his team but he wasn’t racing, he was simply riding.

By the start of the Turchino climb, freshly re-opened from the war closure, Coppi had ridden everyone off his wheel except for the French rider Lucien Teisseire. By the top of the climb Coppi was alone, the solo escape, which was to become his trademark for the next 15 years, began that day. His lead increased inexorably as he proceeded up the coast towards San Remo, his fluid, powerful pedal stroke never faltering. By the time he crossed the finish line his lead had grown to 14 minutes over Teisseire, Bartali rolled across 24 minutes later, his face a dark mask. Their rivalry had initiated in earnest that day and wasn’t due to end for many years to come, to the infinite delight of Italian cycling fans.

In so-called modern times really only two important attacks from a long way out have succeeded at Milano-San Remo. That of Gianni Bugno in 1990 and then the following year by Claudio Chiappucci. In the edition won by Bugno the first selection was created after just 20 km. by a strong wind that broke the peleton into three groups, Bugno being in the lead one. By km. 44 the first two groups had come together but behind a whole slew of big names were riding their eyes out trying to catch, amongst them was defending winner Laurent Fignon, going for the hat trick at MSR. The front group was on the boil, driving a furious pace that never seemed to drop below 45-46 km. per hour. Their lead increased despite the determined chase from behind, by km 168 it had ballooned to 11 minutes and at the town of Varazze 80 riders abandonded including Fignon. Up front the lead group had dwindled, casualties of the furious pace setting dropping off the back. Flying through the town of Imperia at km. 261 a Sicilian rider named Canzonieri attacked off the front, Bugno was the only one to follow him. Working smoothly together their lead grew to 41 seconds over a chase group that included Argentin, Skibby, Golz, Sorensen, Mottet and Fondriest. Heading into the “Capi”, those leg burning final climbs along the coast, Bugno decided to rid himself of his companion, dropping to a lower gear and jumping away decisively. By the top of the Cipressa his lead over Golz and Skibby was 18”, it was 28” over Delion, Fondriest and Colotti with what was left of the main group at 43”. At km 278 Bugno’s lead was 12” over the six men who had joined forces in the chase, the group at 34”, the race was still wide open. On the final climb of the Poggio, Bugno was still looking strong as behind him Rolf Golz surged, dropping his partner in the chase Jesper Skibby, passing over the top of the Poggio 15” in arrears. Both riders flew down the descent risking at every hairpin turn, Bugno floating just out of reach as he made it onto the flat run in to the finish where he won with his hands raised in the air, the classic Bugno victory salute. It wasn’t the last time that Gianni would have his “tifosi’s” hearts in their throats, hoping against all odds that their man would hang on for the win.

The very next year it was Claudio Chiappucci’s turn and his daring attack on the descent of a fog laden, rain soaked Passo Turchino blew the race wide open. His move had been planned much earlier and by taking powerful teammate Guido Bontempi with him, Chiappucci assured himself of better than even odds at staying away. Joining the two Carrera men were Marino Lajarreta, Charley Mottet, Rolf Sorensen and Adri Van de Poel. By the time the rest of the pack realized that Chiappucci was up the road their lead had grown to 40 seconds. There were just over 100 km. to the finish. Giving an idea of the pace being set, it took three flat lander rolleurs like Jelle Nijdam, Peter Stevenhagen and Thierry Marie 45 minutes to bridge up to the breakaway. Once this trio had hitched their cars to the train the race was on for real. As they rolled over the Capi the speed, the weather the fatigue began to take a toll and one by one, riders in the break began to slip off the back, Chiappucci driving it to keep the pace high. By the time the two remaining breakaways, Chiappucci and Sorensen, had reached the foot of the final climb up the Poggio, their lead over the pack was 1’40” and they knew that one of them was going to win. Knowing that he had no chance against the faster Dane in a sprint finish, Chiappucci attacked with everything he had left going up the Poggio, dropping Sorensen and just managed to negotiate his way down the other side without crashing. His solo win in Corso Cavallotti after a daring attack from far out propelled him into the hearts of the Italian tifoseria.

And now, in just a few more hours, the race caravan will begin the march towards San Remo and a new Classics’ season. Maybe it’s the romantic in me but I’d like to see a daring attack from a far, like in bygone years. Soon we’ll know.

Stories for the Italian Cycling Journal about rides, granfondo, having a good time cycling in Italy, Italian cycling history, etc. are very welcome. Contact me at veronaman@gmail.com. There are more than 1,300 stories in this blog. The search feature to the right works best for finding subjects in the blog and there is also a translate button at the bottom so you can translate each page.
Posted by Angelo senza la o at 4:58 PM