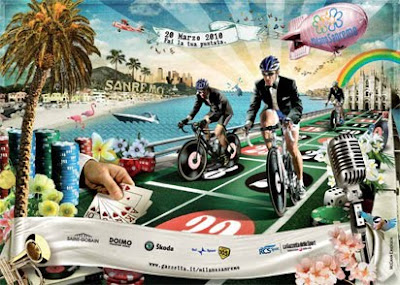 With the one day classic Milan-Sanremo just 9 days away the first stage of Tirreno-Adriatico yesterday was analyzed looking ahead to the "Classicissima". This is how the Gazzetta dello Sport saw it:

"Nine days away from the Milan-Sanremo which starts on Saturday 20 March, who were the winners and losers after the first stage of the Tirreno-Adriatico? Cadel Evans and Alessandro Petacchi were definitely winners, while Mark Cavendish was a loser.

Evans, the world champion, was never out of the first twenty places in the peloton, well protected by the jersey of the American champion Hincapie. The Australian BMC rider even picked up a second of handicap time in the intermediate sprint at Rosignano-Marittimo, when the peloton was pushing to catch Grabovskyy. A sign that Cadel is feeling good.

Looking ahead to the Classicissima, there were also some very positive signals from Petacchi: he had fallen in Sardinia, and again in Monday while training, needing 5 stitches for a cut on his forehead and injuring a tibia. Especially on the climb, Ale-jet was never out of the group of the best riders.

Near the end of the stage Vincenzo Nibali also appeared at the front of the bunch, riding in support of Bennati. Mark Cavendish, however, gets a negative report. The winner of the 2009 Sanremo dropped off the peloton on the second climb up Rosignano, and his team mate Eisel had to slow down and wait for him because Mark could not keep up with his pace. His other teammates Bak and Grabsch also escorted "Cav" to the finish line: the Englishman was 4'59" behind (stage winner) Gerdemann."

Stories for the Italian Cycling Journal about rides, granfondo, having a good time cycling in Italy, Italian cycling history, etc. are very welcome. Contact me at veronaman@gmail.com. There are more than 1,300 stories in this blog. The search feature to the right works best for finding subjects in the blog and there is also a translate button at the bottom so you can translate each page.
Posted by Angelo senza la o at 6:00 AM