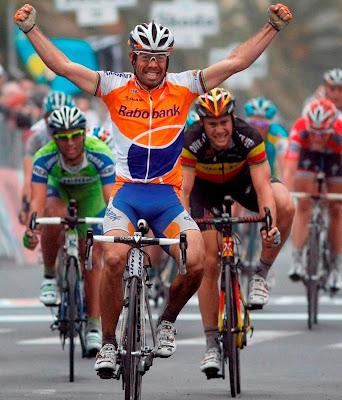 Escapes were attempted but once again it came to a sprint finish. As reported by the Gazzetta dello Sport:

"Oscar Freire is like that: he wins when you don't expect him to. Sometimes, as was the case in the Classicissima number 101, he dominates - without the help of his team, without giving his rivals the chance to respond to that one, lethal, strike. The Spanish Rabobank rider convincingly won the contest with Tom Boonen, second, and Alessandro Petacchi, third. And following his wins in 2004 and 2007, the third Milan-San Remo - the same number Fausto Coppi won - now gleams brightly in an amazing trophy cabinet, which already holds 3 world titles.

THE SPRINT — The victory tally again stands in favour of foreign riders: 51-50, including the last four. And yet our riders all had their moments: Francesco Ginanni on the descent from the Cipressa, Vincenzo Nibali coming down the Poggio, Filippo Pozzato with a counter-attack after Gilbert's charge in the final 10 km of the race. And Petacchi held off the attacks on the San Remo's final climb, which yet again did not prove to be decisive. But there was nothing that could be done about the sprint. Freire stayed on Bennati's wheel, guided by Kreuziger; Boonen and Petacchi were behind him. When Oscarito got up on his pedals, the Liquigas-Domino rider Bennati stayed put (he finished fifth). Petacchi? Left behind. And it was Freire relatively easily, with Modolo, the first-year professional with CSF-Colnago, an excellent fourth. Boasson Hagen and Cavendish (puncture on the Turchino) were among the day's disappointed riders. Cunego, our hope for the northern classics, had a good race.

THE START — The day began with an extended break by Ratti, Caccia and Piemontesi, who got away after 1 km and built up a lead of more than 20 minutes; that was followed by the Brazilian rider Fischer falling on the decsent from the Turchino, which forced him to retire with a broken collar-bone, and the attack by the Bouet-Grabovskyy duo on Capo Berta. A taste of what was to come on Cipressa.

A RELAXED PETACCHI — "Winning the San Remo is always important, but this is the third...," said Freire. "I'm going really well this year (this was his fourth win, ed.), and I hope I can keep it up. I dedicate this victory to my team: I was the only one who had won it twice, but no one thought of me as a favourite. We'll see if I'm among the favourites next year." Petacchi was relaxed: "I rode a great San Remo. I was amazed how well I went on the Poggio. I knew Gilbert and Pozzato would take off, so I tried to stay with them and I didn't realise there was a gap behind us. Then on the descent I tried to stay in front to avoid any risks." Pozzato: "We had already decided that if things didn't go well on the Poggio, I would try to make a move in the last two kilometres. Congratulations to Oscar." Boonen: "Freire was great. I was also going well, I was on his wheel and I tried to anticipate him, but Oscar won by two bike lengths. After a sprint like that you can only say that Oscar was the best."

Stories for the Italian Cycling Journal about rides, granfondo, having a good time cycling in Italy, Italian cycling history, etc. are very welcome. Contact me at veronaman@gmail.com. There are more than 1,300 stories in this blog. The search feature to the right works best for finding subjects in the blog and there is also a translate button at the bottom so you can translate each page.
Posted by Angelo senza la o at 4:11 PM