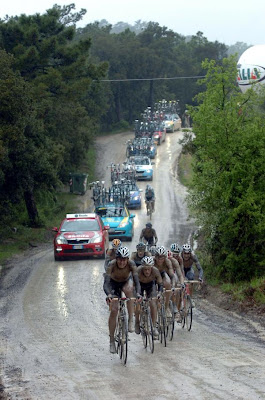 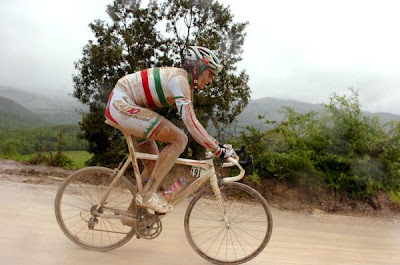 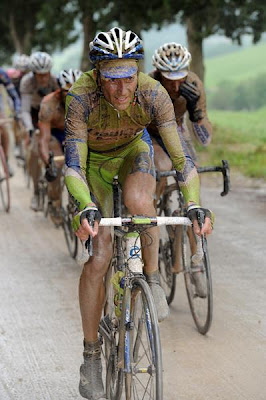 Nibali: "Losing the pink jersey because of a crash is hard to take. Until then, we were in control of the race and I felt good. I was watching my rivals and was ready to respond if they attacked. The crash ruined everything.I'm disappointed and sorry to have lost the jersey because I could have defended it. I'm hurting after the crash but I want to look ahead to the rest of the Giro. I've lost the jersey but I'm not giving up just yet. I still want to fight and surprise people at this Giro."

Basso: "It's a pity to have lost time on Evans and Vinokourov. It was an unlucky and difficult day even if my legs felt good. I got going again pretty quickly after the crash, but it would have been hard to catch the leaders on my own, so I waited for my teammates. We chased together but the dirt road sections didn't help us and the leaders were going hard. I'm honestly not too bothered by the time that I've lost, just like I didn't get carried way when he gained time. There's still a long way to go in this Giro."

Vinokourov: "It's been a really hard day. We started the stage flat out, that’s what made it difficult all the way. It was really a surprise for me when we hit the Strade bianche. It was like Paris-Roubaix but without the pavés. It was even harder than Paris-Roubaix, I think. It’s been a hard day for everyone. In the hills I tried to attack, but Evans was so strong. For me, it’s an advantage to have a difficult race. It might have been an even harder battle than in the mountains. In the last 30km, I couldn’t see anything. In these conditions, you have to be careful: if you try to close your eyes, you might never be able to re-open them. For the spectators, for sure, it was a great spectacle, but not for us. I’m favourable to such a course for a one-day race, but in a Grand Tour?”

Evans: "It was a spectacular stage. We'd prepared things in fine detail for the dirt roads. It suited me because I raced mountain bikes for 7 years. That was a huge help for me. I felt strong in the finale and at the finish. I wasn't afraid of going a bit early in the sprint because I wanted to use my strength to win it. It's an important moment the Giro and I'm just happy to have survived it pretty well. I don’t know whether it will decide the Giro, but it was important."


Millar: "Wow, what a day. It's one I'll never forget. I don't think anyone who rode will either. I actually enjoy it when it's like this. I think this is what racing is all about. In a way, the worse the conditions, the better I seem to go. In the end it was just mano-a-mano and it was actually a lot of fun. The roads round here are called strade bianche but they weren't white today. After just two kilometres of racing on them I looked at the guy next and thought 'Is that what I look like?' We were like mud men. It wasn't actually that bad riding on the dirt roads, it wasn't dangerous. The problem was the amount of dirt and water coming up into your eyes. There were moments when I was just blinded. When it happened going into a corner that was the worst. You couldn't see which line to take."

Cunego: "It’s been an insidious day. The weather made the last 50 kilometres extremely bad. On the gravelled roads, it became impossible to ride. It was a race from another era.”

Sastre: "Today's stage was action-packed. Frankly, it has been a tough and very difficult stage. In theory, it seemed as though everything was going pretty well, but the crash I had at the start of the stretch of dirt roads made all the difference and affected the stage results. I hurt myself quite badly in the crash and then changing my bike didn't work out well. Then at the end with eight kilometres to go, I had a really bad time. If it wasn't for Xavi Tondo riding with me - he did such an amazing job and stayed with me every second - it would have been a lot worse."

Lloyd: "I can understand that they want a spectacular stage, but something like what we've just done is ridiculous if you ask me."

Zomegnan (race director): "Today was just a day of rain. The riders had to ride through the snow over the Gavia. It's right to race on the dirt roads. The memory on my mobile phone is full of messages from people saying that it was a great stage. The riders took it well and so this stage will become part of the history of the Giro d'Italia."

Stories for the Italian Cycling Journal about rides, granfondos, having a good time cycling in Italy, Italian cycling history, etc. are very welcome. Contact me at veronaman@gmail.com. There are more than 1,400 stories in this blog. The search feature to the right works best for finding subjects in the blog and there is also a translate button at the bottom so you can translate each page.
Posted by Angelo senza la o at 5:26 AM