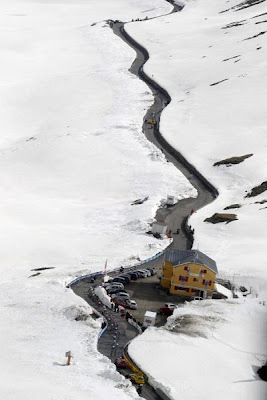 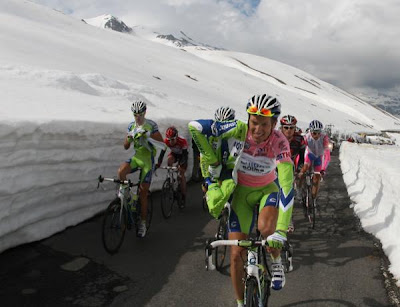 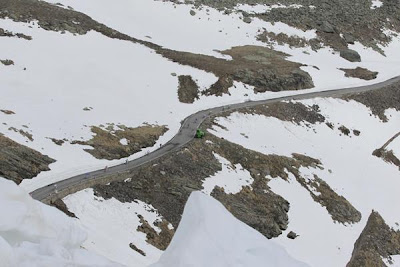 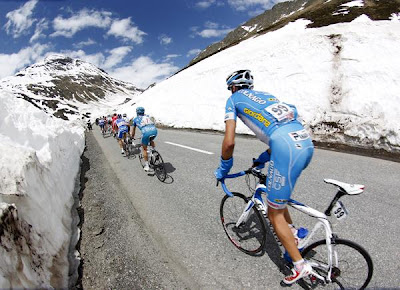 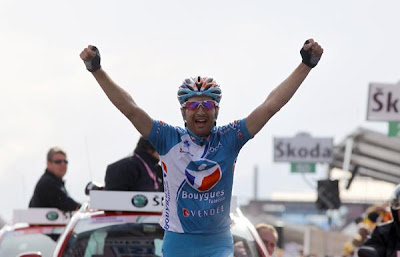 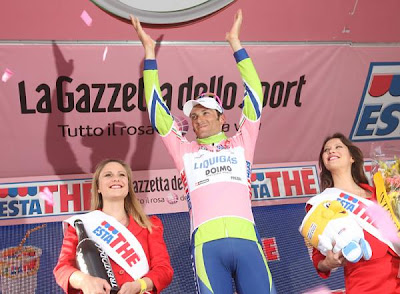 The Giro's last mountain stage reveals itself calmer than expected for Ivan Basso. The frightening five peaks, among them the terrible Gavia only generates some unrealistic attempts by Sastre and Vinokourov during the initial climb. The stage, 178 kilometres from Bormio to the Tonale Pass, livens up at last during the final kilometers when Evans hurls forward. He disrupts the pack of hard-hitters in his pursuit of the podium. Tomorrow the Giro concludes with the time trial in Verona on the day of Ivan Basso's official triumph.

Skirmishes right off the bat with an attack of a 13-man pack followed by one by Stefano Pirazzi and finally one by Irishman Dan Martin, who is snagged by a group of 19 counter-attackers (including Cunego and Pinotti) after a bit. At the beginning of the climb towards Forcola di Livigno, the 20 pace setters have a 1'09" lead on the pink jersey pack. An attack by Sastre and Simoni kicks up along the climb and they snag the fugitives in no time at all. Other men in the classification join Kazakh racer Vinokourov. Meanwhile Stefano Garzelli (who is having trouble after having fallen yesterday) and Spaniard Xavier Tondo withdraw from the race. Matthew Lloyd takes the points of the KoM on the Forcola di Livigno peak to get the green jersey, tearing it off Basso. The Aussie also takes the lead on Eira Pass, where the fugitives bring up a 1'07" lead on the pink jersey pack, Cunego included. Pirazzi takes off on his own at the Foscagno Pass and crosses it with a 50" lead on his chasers and a 1'45" on the pack.

Passo di Gavia. This Giro's "Cima Coppi" with its 2,618 metres. Pirazzi is snagged while Simoni goes ahead, followed by Tschopp. The mature racer wants to attempt this undertaking to conclude his career. The Swiss racer is merciless on Gavia's peak and beats his breakaway companion with a sprint, taking the joy away of crossing first through the most important peak. After the power of his surge, Tschopp is alone. During the very challenging downhill from Gavia, Simoni is snagged by Vinokourov, Pinotti and Sastre. Basso's Liquigas is in total control of the race. At the beginning of the climb, Tschopp has 1'00 on Vinokourov, Righi and Karpets and 2'18" on the pink jersey. The Kazakh racer gives it all he has in the attempt to bring this stage's victory home with him for the first time but up ahead the Swiss racer does not give in for an instant and wins on Tonale. Meanwhile, right behind him Evans surges in pursuit of winning the stage and he passes Vinokourov in a heartbeat and comes in at 16" behind Tschopp. Scarponi leaves the pack, too. In the general classification, he is only 19" behind Nibali's third place. Basso tries to bring his teammate up with him in order to save his place on the podium, but the Messina native can't make it and so it is the Varese native who will snag Scarponi and beat him on a dash and grab his bonus time . The result is Nibali maintains his third place position in the general classification, even if it is only by 1 second. Basso reinforces his pink jersey: now he has 1'15" on Arroyo, 2'56" on Nibali and 2'57" on Scarponi.

Michele Scarponi uses his best weapon to convey his state of mind: Irony. "I already lost the Tirreno-Adriatico for a placement issue and now I'm only a second away from the podium. Hell, Ivan you could have left me this third place..."

Cadel Evans, the extraordinary world champion who is honoring the race right to the end says:"Something really strange has to happen for Ivan to lose this Giro. I would have wanted to win this stage but I don't have much liberty to attack. In any case, I'll give it my best shot in Verona, too."

Basso, the Varese native, received hearty applause from the public at the starting line in Bormio. He warns "Everyone remembers what happened a year ago in Rome, I'll prepare as if I only had a 2 second lead, not 1'15". The fact that I'm in good shape is a comfort. They drove us crazy here, attacking from the beginning to the end. And yet, I earned something."

Tomorrow, on the 26th anniversary of the victory of Francesco Moser, the l'Arena of Verona (the Roman coliseum in Verona) will once again host the finishing stage of the Giro d'Italia.

The 15 km time trial course will be open from 0930 to 1130 for riders to test the course. At 1130 there is a VIP team race that will include, among others, Jury Chechi, Antonio Rossi, Mirco Bergamasco, Denis Dallan, Christian Zorzi, Pietro Fanna, Alessandro Pittin, Mario Cipollini, Davide Cassani, Maurizio Fondriest, Gianni Motta and Francesco Moser. The l'Arena will open its gates at 1300 for guests. The first time trialist will begin at 1440. Ivan Basso, the current leader, will start at 1725. Riders will leave at 3 minute intervals. 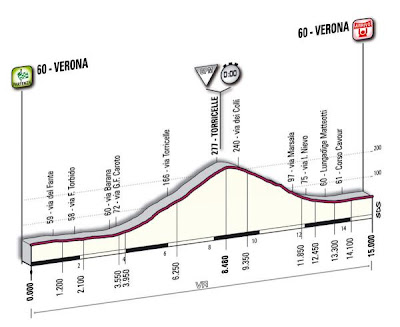 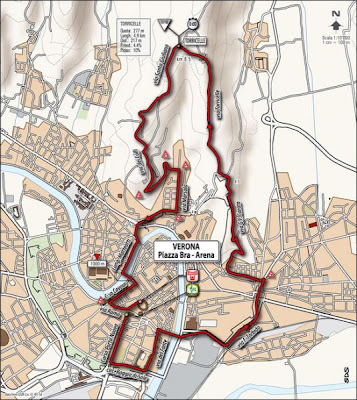 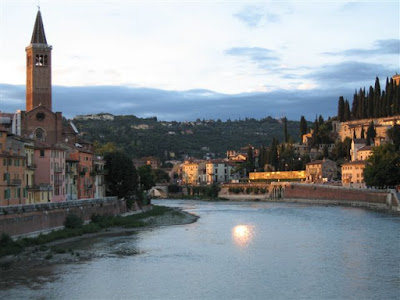 Stories for the Italian Cycling Journal about rides, granfondos, having a good time cycling in Italy, Italian cycling history, etc. are very welcome. Contact me at veronaman@gmail.com. There are more than 1,400 stories in this blog. The search feature to the right works best for finding subjects in the blog and there is also a translate button at the bottom so you can translate each page.
Posted by Angelo senza la o at 6:14 PM