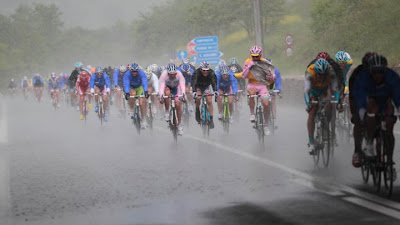 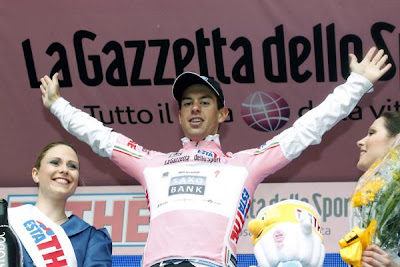 L'Aquila, May 19th: An unbelievable day! The Gazzetta dello Sport reports it like this:

A breakaway like back in the old days shines a light on the outsiders.

The history of cycling is made in this way as well. A breakaway/swindle, a group of men that get away after only a handful of kilometres. The teams of hard-hitters inexplicably let it happen. Result: the classification is completely re-arranged. The longest stage, 262 km from Lucera to L'Aquila, disputed under incessant rain, revolutionizes the race. Vinokourov and all the rest of the hard-hitters, guilty of allowing too much space to a group of 56 fugitives, cut the finish line almost 13 minutes after winner Evgeny Petrov (a racer who hasn't won a race since 2002) and, above all, from the 25 year old Australian Richie Porte, who is the new leader of the general classification.

BREAKAWAY/SWINDLE
The stage that disrupts the Giro heats up right from the start. Immediately after Lucera, the town in the province of Foggia hosting the starting line, the spurts and "counter spurts" begin. 25 racers get away at the 20th kilometre and are joined by others little further into the race to form a 56 person platoon. Behind them, inexplicably, teams of hard-hitters let it happen. The Astana team of pink jersey Vinokourov doesn't budge. Evans' Bmc team isn't ruffled in the least. The Liquigas team with Nibali and Basso don't push the pedal either. An error in judgement? Did the teams not manage to settle who should drag? In any case, minute after minute the pack of pace setters gets away: in the vicinity of the first KoM at Rionero Sannitico, the fugitives reach the max lead of 17'50". An infinity. And yet, among these fugitives there are several racers that are at a good spot in the classification, starting with Richie Porte (6th at 2'26"). But Agnoli, Sastre, Arroyo, Kiserlovski, Tondo and Efimkin are in the mix as well. All racers that have less than a 10' delay. In the meantime, the toxins accumulated in ten days of Giro are starting to leave their mark: 10 racers do not make it to L'Aquila.

PETROV WINS
A little over 30 kilometres from the finish line, the hard-hitters finally spring into action. When the pace setters have a little more than a 13' lead, Basso, Vinokourov, Cunego, Evans, Scarponi, Garzelli and company get up front and pull. But it's too late now! The forays start up front to grab the victory: Abbruzzo native Cataldo goes for the lunge at -6 km, he gains about 100 metres but Bakelandts and Gerdemann snag him. The Belgian racer slips on a curve, giving the green light to the German racer, who stalls in the final climb to L'Aquila and is surpassed by Russian Evgeny Petrov (Katusha), who pinpoints the victory that had been eluding him for the past eight years. Cataldo and Sastre are right behind him. That same Sastre who has been restored to life and goes and earns himself 8 seconds of bonus time, Wiggins and new leader Richie Porte at 12". Vinkourov, who is shivering from the cold, Basso and all the other men in classification arrive with a delay of approximately 13 minutes.

Photos: downpours on the stage; (by Bettini) 1st year professional Richie Porte, from Australia, puts on the pink jersey.

Stories for the Italian Cycling Journal about rides, granfondos, having a good time cycling in Italy, Italian cycling history, etc. are very welcome. Contact me at veronaman@gmail.com. There are more than 1,400 stories in this blog. The search feature to the right works best for finding subjects in the blog and there is also a translate button at the bottom so you can translate each page.
Posted by Angelo senza la o at 8:16 PM