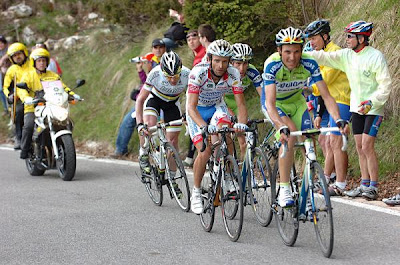 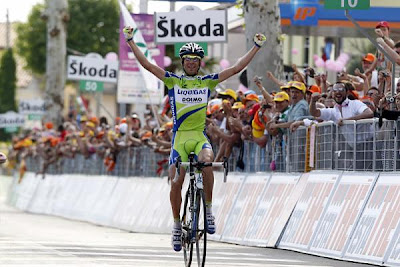 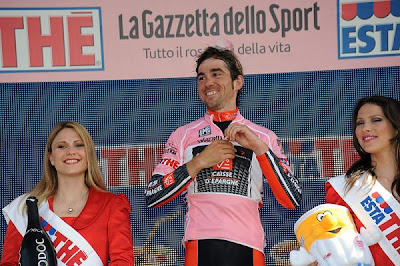 Asolo, May 22: Another unpredictable day in which the pink jersey moved onto the shoulders of yet another rider.

For the third consecutive day a stage has been won by an Italian, this time by Vincenzo Nibali. Nibali, Basso, Scarponi and Evans were in the first group to cross the KoM Monte Grappa. Raining at the summit Nibali attacked on the descent on wet roads and had a half a minute advantage over the three by the time he reached the flat section of the course. He time trialed the last 15 km to victory. Cadel Evans on Nibali's descending: "He was a beast in the downhill."

"I feel gratified after my fall at Montalcino," said Nibali. "We proved that we could get control back of the race. Agnoli and Szmyd kept up a hellish pace. Ivan took a flight 500 meters from the finish line that made it perfectly clear to everyone that he's really in great shape. Personally, I am very happy and tomorrow will bring even more answers."

David Arroyo (Caisse d'Epargne) is now the wearer of the pink jersey. Richie Porte, who was in pink at the start of the stage, struggled on Monte Grappa and crossed 4'45" back is now in 2nd place. Arroyo knows he is in for a difficult day tomorrow saying, "I'm ready to defend this jersey up on Zoncolan. I was there in 2007 (the year Simoni won), so I know that it's going to be a really challenging stage. A gigantic effort. Who will be the first to try? It doesn't really matter, everybody will attack me."

With Scarponi and Evans having to do the chasing of Nibali, Basso was able to sit in and conserve some energy for tomorrow's very hard stage which will have several KoMs and includes the finish on Zoncolan (10 km at 12% and certain points at 22%).

Stories for the Italian Cycling Journal about rides, granfondos, having a good time cycling in Italy, Italian cycling history, etc. are very welcome. Contact me at veronaman@gmail.com. There are more than 1,400 stories in this blog. The search feature to the right works best for finding subjects in the blog and there is also a translate button at the bottom so you can translate each page.
Posted by Angelo senza la o at 4:31 PM